More information is coming in about the discovery of various bonds on the border of Switzerland and Italy.  Namely, there is a tremendous paucity of information.  This is one of several mysteries of life we would like to see resolved.  At least the news is making the news, ever so slightly.   It came to Bloomberg News, for example!  So let’s look at the latest developments:

Here a a photo of the bonds taken by the border police: 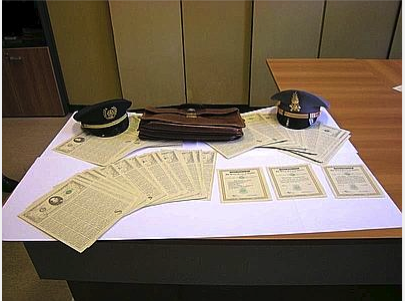 My opinion: they look quite new.  If they were kept in a safe, they shouldn’t have yellowed like this, the paper used for these sorts of bonds usually was not the acid-based paper materials because these deteriorate rapidly over time.  But I am only guessing because this hasn’t been investigated yet, by experts.  There are ways of verifying the nature of these paper products using modern technology.  Then, we have to verify the identity of the ‘Japanese’ gentlemen, too.

Japan is investigating reports two of its citizens were detained in Italy after allegedly attempting to take $134 billion worth of U.S. bonds over the border into Switzerland.

“Italian authorities are in the midst of the investigation, and haven’t yet confirmed the details, including whether they are Japanese citizens or not,” Takeshi Akamatsu, a spokesman for the Ministry of Foreign Affairs, said by telephone today in Tokyo. “Our consulate in Milan is continuing efforts to confirm the reports.”

An official at the Consulate General of Japan in Milan, who only gave his name as Ikeda, said it still hasn’t been confirmed that the individuals are Japanese. “We are in contact with the Italian Financial Police and the Italian Public Prosecutor’s Office,” Ikeda said by phone today.

Well, this is one story that wasn’t a fake story.  It is very hard to confirm stories online, there are lots and lots of fake stories inserted into the news in hopes this will confuse people and embarrass news reporters.  I have learned to be very, very careful about ‘breaking’ these sorts of stories which is why I didn’t give this one a high rating when I first mentioned it.

Now, it looks like a real mystery and one that should be solved, pronto.  I look forwards to learning more information.  Some posters online are speculating along the same lines I suspect, namely, since this is probably a true story now [Japan and Italy confirmed this today] then, the list of possible culprits is not very long.  Namely, North Korea is at the head of the line, big time:

weird, definitely. I’m italian, and I confirm that the sum is correctly translated (“miliardi” stays for billions). the story is covered mainly by blogs, conspiracy sites,local swiss newspapers, but it is on some italian mainstream media as well and on the police site, without great emphasis though (in the “strange but true” sections, so no analysis at all).

a blog published an interview to a police officer in which he confirms the fact, and that the police is collaborating with some Us secret agents to establish whether the bills are false or not: http://crisis.blogosfere.it/2009/06/96-miliardi-di-bond-intervista-al-col-mecarelli.html

the two men apparently tried to reach switzerland mixed with ordinary commuters on a train.

nothing more, very few links on the international sites. it’s usual that people crossing the border are asked if they have something to declare, and there can be a search, but not always and not in so accurate way.

Consider these background facts: * North Korean faced international sanctions over institutional counterfeiting of US $100 bills. The country has no qualms about mass producing counterfeit money. * North Korea has repeatedly manufactured fake passports, such as the Dominican Republica one used by Kim Il Jung’s son to repeatedly enter Japan (where he was caught wearing a diamond encrusted watch). He claimed he was visiting Disneyland, but witnesses say he went straight to the red light district. The country has no qualms about mass producing counterfeit passports and claiming fake citizenship. * There are a million ethnic Koreans in Japan who are otherwise Japanese, about a third of whom identify with North Korea and have supported North Korea’s policies including kidnapping, murder, and international terrorism. North Korea has in fact admitted to these allegations, which are the crux of Japan’s stance in six-way talks. North Korea has no qualms about terrorism, murder, kidnapping, or any crimes in general. * North Korea’s counterfeiting, missile sale, and opium production are all designed to generate hard currency it desperately needs to survive. It will do anything to get money. * One of the few safe havens in the world for North Korea is Switzerland due to its strong neutrality. Kim Il Jung’s heir went to school there and Switzerland serves as a repository for much of North Korea’s currency and banking needs. * North Korea has been known to use its small fleet of ships to transport agents into various countries for its crimes – as demonstrated by their use in kidnapping operations off Japan. Agents prefer to disembark by ship and cross borders by land. * As only China, Japan, and Russia even possess this amount in bonds these are the only nationalities any smugglers would claim. Alas, such denominations of bonds do not exist in this amount and would be accounted for in any case, and they are almost definitely forgeries. * North Korea has a colorful history of organized crime dating back decades – not many years have to pass for another bizarre pattern of crimes to emerge and it was only a couple of years ago they were caught for mass counterfeiting of dollars.

The End of Very-High Denominations

The movement of paper certificates and their filing and refiling, increased the chances of them being lost, and the losses from theft were rising.  While the losses of Treasury securities due to theft amounted to less than $4 million in 1966 by 1969 they had skyrocketed to over $30 million. 7 By late 1970, insurance companies were refusing to cover holders of Treasury securities against loss, threatening the functioning of the government securities market.

The maximum denomination was now reduced to $1 million.  Very-high-denomination Treasury notes just were no longer necessary or cost-efficient.  Large buyers of government securities now had the option of holding paper certificates or having the securities electronically entered into their accounts at their Federal Reserve bank.  Such investors were eager to take the cost-saving book-entry option.  For the Treasury, the book-entry system was also a cost saving development.  The Bureau of the Public Debt could track securities and their semiannual interest payments electronically.  Interest payments became lump sums transferred electronically and did not involve the shuffling of paper coupons and money back and forth.  More electronic securities also meant fewer paper securities and less work for the Bureau of Engraving and Printing.  Thus, book-entry procedure was a cost saving for both the Treasury and the large investor, obviating the need for very-high-denomination Treasury notes.

Due to theft, these bonds were stopped.  And there is no way North Korea could have nearly $200 billion in such notes if they were from the pre-1974 era.  Even if the stolen bonds from back then rose terrifically in value, it wouldn’t be this much.  On top of this, these bonds are unconvertible in present forms.  Unless someone unscrupulous were to gradually feed them into world financial markets, slowly, one by one?

Quite possible.  Using fake bonds and getting them to slither though the system via selling them to gullible third world DRUG dealers, anxious to turn profits into legitimate bonds?  Quite possible.

The other problem is, when the Fed went electronic in 1974, guess what happened next?  INFLATION TOOK OFF!  Duh!  And frankly, to me, this is the REAL crime, the BIGGEST HEIST ON EARTH.  We should have forced them to stick to paper bonds.