The FDIC is running out of insurance money for depositors.  To fund future bank closings, the FDIC is fast-forwarding the fees due to it from solvent banks.  I know that my own bank is grousing about this.  The oldest credit union in America was set up in the Great Depression in Albany, NY, to provide banking for state employees.  Being conservative, this bank didn’t go off the lending cliff during the Bush bubble years.  But will have to protect depositors to banks that were careless or stupid.

Now, we live in interesting times but this is no more difficult that previous interesting times. That is, to us, it looks all very difficult.  But as I dig into historical events in the past, I discover that our travails are barely different from most any other period I select to review.  So we have to keep our heads. There is a lot of apocalyptical talk even from the Bilderberg gang.   Left or right, in nearly every sector I can think of, people are freaking out, fearful or proclaiming the End of Times.

For example, the news that the Iranians might want nuclear bombs is treated as an End of Times story.  Oh, we will really be in trouble!  The Iranians haven’t invaded anyone in the last 1,000 years and they will do what?  They correctly see this as the only way to stop invasions by the nuclear armed nations like the US or Israel.  So it won’t be the end of the world if they do what Europe, Russia, China and the US have done already.  On the other hand, we could have WWIII and this can destroy us nearly totally.

People who are scared of vaccinations, for example, tie this in to various strange stories about how governments want to kill us by protecting us from virulent diseases.  This, to me, is one of the queerest of the End of Times stories being bandied about these days.  At this point, I don’t care if I have no readers at all, if anyone expects me to hop onto this particular paranoid fairy tale.

But the End of Times fears are tremendous and overwhelming!  The ruling elites have decided secretly, last spring, to make this the Endless Summer of Global Warming.  This was a total failure.  Due to volcanic actions in the Bering Straits, we had this fine veil of dust that has made the evening skies light up with a gentle glow.  And of course, it was freezing cold and soaking wet in Europe and the Northeast North America.  Namely, where the news is created.  So attempts at scaring us about global warming failed miserably.

The entire global warming game is to put a tax on energy use that is collected by international bankers and used by them to capitalize their lending systems!  Period.  Now, this is a ‘conspiracy theory’ of my own and it is based on my own observations.  This is purely man-made or rather, gnome-made.  They couldn’t simply impose an international tax on energy consumption because this would be intensely unpopular.  So they have to scare us into taxing ourselves in the forlorn hope we won’t fry in the future.

As I noted, not ONE rich person has decided to reduce their carbon footprints even slightly.  This emphatically includes the mega-carbon users, the British Royals.  Who are playing a big role in trying to convince us we must tax our carbon use to save our lives.  Keeping in mind how these complex forces are driving us all into a panic, here is the FDIC news:

A source, speaking to Reuters, said the FDIC likely would propose for the banking industry to prepay $12 billion a year in assessments, for a total of $36 billion. The Wall Street Journal said the fees could be as high as $54 billion after having the banks prepay fees for 2010, 2011 and 2012. .

The FDIC proposal is likely to get resistance from the banking industry because of the size of the upfront fees and because the payments would come just as the industry is beginning a recovery. .

The higher insurance-fund fees are likely to continue crimping the profits of big banks such as Bank of America (BAC Quote), JPMorgan Chase(JPM Quote), Citigroup(C Quote) and Wells Fargo(WFC Quote), but could even have a bigger impact on regional lenders.

Obviously, the fees were too low in the past.  It was wrongly assumed that we would never have another banking collapse like the previous 10 banking collapses that regularly hammer the US economy since 1792. 200×10=20.  That is, every twenty years, like clockwork, our banking system collapses.  Each of these obvious cycles have the same features: the ability to hand out loans based on less and less capital finally reaches a toxic stage whereby cheap loans are handed out with NO ONE putting up ANY capital at all!  No down payments, no capital reserves in the banks, no savings, and above all, no limit to amounts lent.

Each cycle, reforms are introduced.  And 15 years later, dumped.  This is a very stubborn cycle and it has run this way ever since money was invented and lending money was allowed.  Since we know this, all we have to do is track the amounts being borrowed.  When the graphs suddenly surge upwards, interest rates must go up, automatically.  This never happens because it is very popular to lend money with low interest rates.  No one wants to stop this from happening.  Anyone who does stop this process is political dead meat.  Ask Jimmy Carter how popular this made him!

The FDIC currently has about $50.2 billion in its fund — 20% of which will be depleted by the recent IndyMac failure. According to Bloomberg.com, The FDIC last week approved a one-time “emergency” fee and other assessment increases on the industry to rebuild a fund to repay customers for deposits of as much as $250,000 when a bank fails. Smaller banks are outraged over the one-time fee, which could wipe out 50 percent to 100 percent of bank’s within this years earnings. Federal Deposit Insurance Corp. Chairman Sheila Blair rejects the notion that the FDIC should tap into government aid to rebuild the fund. The FDIC does have the authority to tap into the $30 billion of credit at the Treasury Department, People in the industry know that a new bailout can only make things worse. “Without substantial amounts of additional assessment revenue in the near future, current projections indicate that the fund balance will approach zero or even become negative,” Bair said in a letter to the Independent Community Bankers of America. She has quietly urged President Obama to toughen his position on regulation. She lost that fight in the month of July, when the Administration released its regulatory-reform plan, opting for a more risk-averse and bank-friendly approach of more closely monitoring the activities of the largest firms. Some have hinted that a bank holiday could be on the the way, This has prompted many to stock up on food and nonperishable items. what does that mean?

I linked to the above article because the last sentence intrigues me.  I know of a huge number of websites that love to yell about the End of Times.  The technical problems facing the FDIC are actually easy to resolve.  It will cause inflation, of course.  But then, this is inevitable.  We have to debase the currency so we can reduce the value of all previous loans that are due.  That is, borrowers will now be allowed to pay back loans with crappy currency so it is a bargain.  This way, a $500,000 shanty can be sold at $500,000 not because it is a good buy but because the dollar isn’t worth much, anymore.

This is due to over-lending leading to debasing the currency.  If we  never, ever hand out loans like candy, we won’t debase the currency. This also means the government must stop borrowing immense sums, too.  So, below are some Federal Reserve graphs.  They show our problems pretty clearly and also shows us that our destination isn’t the Bank of Japan ZIRP depression but rather, stagflation. 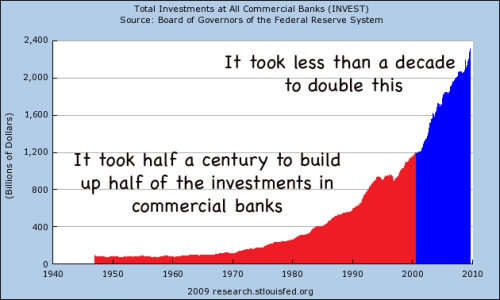 This is a classic hockey stick graph and thus, shows we are in a bubble that began at the end of WWII. This is the reverse: it shows how defaults on loans are now overwhelming the system.

Net Interest Margin (NIM) is a measurement of the difference between the interest income generated by banks or other financial institutions and the amount of interest paid out to their lenders(for example, deposits). It is considered similar to the gross margin of non-financial companies. This graph shows clearly that the net interest has been in a constant decline cycle since mid-1994 which happens to be when Japan first began its long ZIRP system.  No wonder bankers need other systems to enrich themselves! 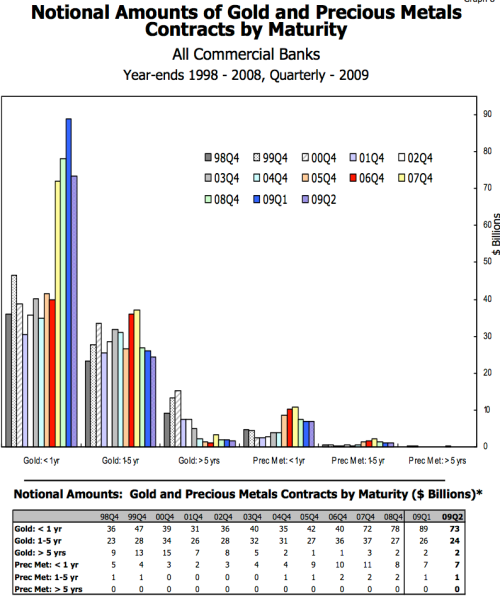 So, Goldman Sachs is the biggest Beast owner.  And look at gold, itself: the biggest gamesters are dumping gold which is why gold is now dropping in price.  Gold is a commodity.  And all the big players will pump or dump according to their own whims.  So don’t expect gold to shoot up so fast again.  Tracking gold via this particular graph in the quarterly OCC derivative reports is a good way to see trends that are obscure.

The main thing here is simple: we have to behave responsibly.  We have to have real capital to keep our systems afloat and capital comes directly from labor and industry.  Deindustrializing our nation and beggaring the workers doesn’t work.  Playing paper money games is stupid.  And gold fixes nothing if the national trade and tax systems are totally screwed up and nothing but red ink is pouring into the system with  no capital base to sustain growth.  And this isn’t so amazingly difficult to fix.

20 responses to “FDIC Is Broken”