I have family sitting right in the eye of the future track of this huge hurricane, Irene.  It seems to have slowed down somewhat and has lower winds, thank heavens.  But…it is very, very big and the biggest killer hurricane to hit Central America a dozen years ago or more was Hurricane Mitch which dropped immense amounts of rain on Central America, causing mud slides and overflowing rivers.  Just look at the GARGANTUAN size of this mega-storm!  It isn’t the wind in this monster, it is the volume of rain we should worry about.

UPDATE: The hurricane is moving so slowly now, the high winds and heavy rains will last an average of 10 hours or more.  This is bad news since the longer a hurricane lasts, the more damage it does.  Faster moving storms do less damage even with higher winds than storms that take their sweet time.

Here is the latest evacuation map which is just amazing: 2011 Hurricane Season

This is one of the biggest and most dense population areas on earth.  It isn’t one city, it is a number of major cities all next to each other, we call this ‘The Tri State Region’ and the evacuation is calling for a quarter million people to leave their homes.

This is nearly impossible to do and most will stay and take the consequences.  The deep gold parts are mandatory evacuation areas of all of the edges of lower Manhattan, all of Coney Island and much of the barrier islands next to Kennedy Airport which will, of course, shut down.

I have been busy all day, working on my own and other people’s homes, getting ready for this storm.  The winds will be only tropical storm levels when the eye passes a few miles to the east of my mountain but that is air speed on the lower levels of the many valleys here such as the Hudson Valley.

I have lived through various hurricane remnants up here and if it is 50 mph sustained winds in the valleys, here on my mountain, it will easily be 65-80 mph sustained winds due to the fact that, especially if a storm comes from the south, the wind accelerates greatly.  When winter winds blow, they are less than normal here since I am nearly totally sheltered from the north by even higher mountains in that direction.

But the south has no such barriers, I live with a wonderful view of the world in that direction but the wind, when it comes from the south, is full throttle.  So I spent hours fixing the roof and doing various construction things to protect my place and tomorrow morning, looking at the maps tonight, I have just enough time to take down the south awnings so they won’t get shredded by high winds!

Looking further south, we see that Norfolk, Virginia, is being hammered by tidal surges as well as Morehead City and Myrtle Grove, North Carolina.  The tidal surges are evidently going well upstream with the small rivers there.  According to the top graph, the Hudson River will see a three foot+ tidal surge well past Albany which is over 100 miles inland and incidentally, right past where my son lives, too. 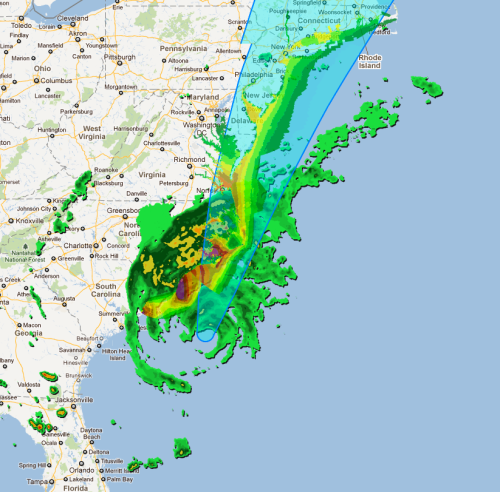 This map shows the storm surge map with the radar rain map and it is raining extremely hard well inland and remember: floods can be extremely dangerous.  They can also be quite sudden as water channels faster and faster but can’t be seen very well in the dark.

Almost all transportation systems in the Tri State Region will be shut down starting tomorrow morning.  NJ Governor: ‘Get The Hell Off The Beach’.. but MTV is doing, as usual, the dumbest things on earth:

Hopefully, they will stay put and we might have a slight improvement in TV fare in the future.  Too bad the NJ Housewives of TV infamy are somewhat too far inland to also float away.

The new WTC complex is not even nearly finished and the mayor has demanded it be totally secured.  Naturally, it is so high and there are no windows after the 52nd floor so the following 30+ floors are totally open and the winds there, like with my mountain, will not be category one winds but rather, category two or even higher.  This means, things up there will go flying, even small objects can fly through the air and smash into the windows of other, nearby towers.

To illustrate how this works, once I was walking my older sister through Manhattan where I used to work.  ‘Don’t you worry about things falling off of buildings and hitting you?’ she asked nervously around 44th Street.  ‘Naw, I go here every day and never worry too much,’ I said.  A minute later, a sheet of plywood was torn off of a sky scraper and fell to the street, smashing into the sidewalk, narrowly missing several people, right in front of us.  Errr…I was never able to walk there again without some major paranoia!

Another thing: tropical storms can harm you even if you are safe inside.  I once went to a fancy restaurant in Manhattan near where the plywood incident happened two decades earlier.  It had been raining hard for several days and raining that day.  As we entered the building, I noticed a heavy dripping from a corner of the thick Victorian plaster ceiling.  I fix these things!  I said, ‘This is going to drop.  Clear the area.’

Well, the proprietors didn’t want to do that so we went inside even though I was very paranoid now and voila: the ceiling collapsed, nearly hitting several people with very heavy plaster falling more than 15 feet.  I then ordered the business to close because more of the ceiling was going to fall.  Again, the proprietor didn’t want to do this but I threatened to get the police and do it quite forcibly.

Frankly, even with bad things obviously happening, people hate to respond properly.  This is a common human trait.  At least most people are taking this storm seriously and I do hope everyone does take this very seriously.  If we get over 10 inches of rain on the entire East Coast, this is very significant flooding and floods are insidious just like tsunamis only they flow towards the oceans not from the oceans.