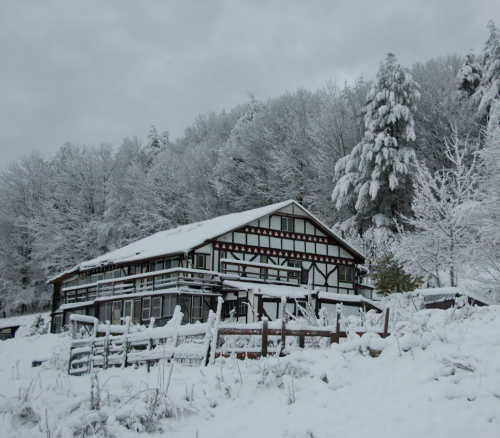 My home encased in ice and snow this last week.

At this point in time, I consider the Kyoto Accords to be worthless.  They had no chance of reducing actual CO2 because they didn’t propose solutions to what is the real problem: over population in the warmer parts of the planet.  The practical action of the global warming program was simple: heavy taxes on people living in cold climates and a transfer of funds to hot places where the cutting down of rain forests is worsening year by year due to population pressure.  Instead of taxing people in hot places to fix a problem that would affect them the most, it went after people living in semi-Ice Age conditions.

All I would get from the regulations being enforced would be to have much higher costs or massive, intrusive restrictions on heating my home.  Since the goal is to make the north even colder than now, I would be forced to emigrate and lose my property since I would not be able to stay alive under these severe restrictions or high overhead costs.  Indeed, I am not against keeping the world artificially cold, I would happily have the rest of the people living in warm, pleasant conditions, pay me to install solar panels or thermal heating.

But the plan was not only to force me to do this but to tax me heavily while I struggle to afford to do this!  An insane idea from the get-go.  On top of this, the Kyoto Accords didn’t have a provision paying me for hosting an army of lovely hardwood trees that love CO2 and would like to have more, not less.  I am an oxygen producer, not a CO2 producer, overall.  Yet, I see not one penny in my pocket for providing this service.  On the contrary, my forest is taxed to the tune of $500 a year.  I want to be paid!

Even as everyone on earth seems to be most anxious to move to the coast as close to the ocean as humanly possible or move to warm and warmer zones, the people struggling against the howling, freezing winds of winter are finally figuring out, the Kyoto Accords are actually a tax imposed on us all to fund fun in the sun in the southern climates and to enable all those people living on the ocean’s edge, a happy life at our cold expense:  Canada: First out of a sinking Kyoto ship? – CNN.com

“Every car, truck, ATV, tractor, ambulance, police car,” he elaborated in a media briefing, before giving another equally unpalatable option of closing down the country’s entire farming and agricultural sector and cutting heat to every home, building and factory.

If the country failed to do so, Kent said taxpayers would have to give $14 billion to other countries “with no impact on emissions or the environment.”

Stopping air pollution is a good thing.  Acid rain is bad.  Very bad.  I love alternative energy systems and hope some day to be able to afford to have solar panels on my home.  I want this now but can’t afford it.  The higher costs of fossil fuels, the less money I have to pay for installing solar panels.  So, raising the cost of energy only made me poorer, it did absolutely nothing towards saving me from winter and conserving energy.

Most people in the colder climes ended up being colder and more miserable thanks to a decade of rapidly rising energy costs.  My little village of Berlin, NY, is dying due to people fleeing due to high gasoline and heating costs.  Increasingly, the hard core that remains here are those of us like myself, who have forests and can cut deadwood up for firewood.  We pray for warm winters at this point.  If it were as warm as say, North Carolina, I would be quite pleased, to be frank.

The southern latitudes have to be forced into a harsh regime of ‘one child only’ families a la China and a perpetual tax on them to compensate the Ice Age belt for being miserably cold half of the year.  The people living in places that will be too hot or the ocean too high must be the ones who pay the costs for maintaining the recent sub-Ice Age conditions which are considerably colder than 90% of the earth’s history except for one dire era nearly a billion years ago when the entire planet froze.  Grrrrr.

We could easily accidentally slide into another Ice Age.  There is serious talk with scientists of reducing the warmth of the earth to the level it was at 250 years ago which was called ‘The Little Ice Age’.  A scary proposition which I greatly resent.  The human die-off of an Ice Age would be 1,000 times more hideous than a warm climate condition!  We evolved rapidly from being apes to being human due to the vicious conditions of the Ice Ages which turned us into the efficient killing machines we are today.  We changed from being rambling eaters of plants and fruits to meat eating murderous creatures.  It was do that or die.

No sooner than I published my story today when this came up at the Huffington Post.  It shows clearly how bizarre the media reportage of the weather has become.  At least, it admits that winter is much more dangerous than summer:  Winter Health Risks Post-50s Should Avoid

But demographically speaking, cold is a far bigger killer than heat. Although cancer (No. 2 on the list of leading causes of death in the United States) knows no season, the body’s reaction to cold — particularly among older men, the most susceptible to climatic change — can increase the chances of blood clotting, which in turn leads to higher incidences of death from heart attacks and strokes (Nos. 1 and 3 on the list).

Similarly, the cold facilitates the transmission of respiratory diseases and ensures that they’re more severe than strains contracted at other times of the year. And winter always arrives with its own set of natural obstacles in tow, including hazardous snowstorms, downed power lines and dangerously strong winds.

Viewing winter as a ‘sweet relief’ is true only in temperate, barely cold areas.  Up here in Ice Age northern climes, we fear winter and go to great efforts to prepare for winter.  I spent some of the hot days in August, up in the woods cutting up downed trees and making firewood.  This is how I hurt my ankle nearly totally and fatally (if there wasn’t modern medical care, I would be crippled for the rest of my life).  While people in the warm parts of the planet were fanning themselves and sipping cool drinks, I was sweating up in the high forest, trying desperately to generate at least 4 cords of firewood.

Here is yet another article about the fears of change and how great an impact humans have on the environment:  Is it time to embrace environmental change? – Salon.com

In 2000 Eugene Stoermer, an ecologist, and Paul Crutzen, a Nobel Prize-winning atmospheric chemist, proposed that human agency has so transformed the Earth’s ecosystem that we are living in a new geological epoch: the Anthropocene, or the Human Age. Proponents of the Anthropocene concept disagree about when the era began. Was it with the industrial revolution, which began to release great quantities of pollutants and gases including greenhouse gases into the atmosphere? Was it earlier, when agrarian societies cleared vast tracts of wilderness for farms and pasture? Or was it earlier still, at the end of the last Ice Age, when, according to the “Pleistocene overkill” hypothesis, hunter-gatherers drove large animals including mammoths, mastodons and giant ground sloths to extinction in both the Old World and the New?

What killed off many Ice Age giant mammals was two things: global warming coupled with human hunting.  The human/dog relationship grew up rapidly when game became increasingly harder to hunt as the once-cold, solid ground turned into swamps and mush.

This is from a rock painting in southern France made around 16,000 years ago.  The hunters are chasing many different animals. namely cattle that look like they escaped from a modern bull ring and lots and lots of lambs and goats and a few deer.  Note who is herding the sheep in a line towards the Great Hunter?  Why, it looks like a German shepherd!  Yes, it is an early dog.  The sheep run from the dog into the arrows of the hunters!

Yes, we had a huge impact on nature and when joined up with dogs, we could hunt more efficiently and the dogs guarded our encampments and the poor Neanderthals and others who had no dogs couldn’t keep alert enough to fight off invasions of their encampments whereas they couldn’t steal up to homo sapien camps.  Human also learned how to use fire and used this for even longer than dogs and this very much changed the environment.

We are the dominant species on earth and if people want to live in a Garden of Eden, then birth controls are necessary.  But most of the religions on earth are dead set against this because the easiest way to grow is to have a captive audience of children who are raised to worship various gods and things.  So the major religions fight birth restrictions tooth and nail.  And since many people living in dire conditions insist on having more children, they have to pay the price for this abundance.  Not people who already have restricted their birthing who happen to live in northern climates.

The north is seeing a catastrophic drop in birth rates.  Southern refugees from the overpopulation mess down there move to the north looking for jobs and public benefits.  But the natives are cutting back on births and already are well ahead of planetary population drops.  Since humans impact nature so severely, cutting back on births is the least violent, most sensible way of dealing with global warming.  Taxing cold countries with falling populations is utterly backwards.