Greek Crisis Continues And So Does US, Israel and UK Warmongering

I went to European news sites to learn about the Latest Greek debt negotiations that seem to have reached a stalemate:   Debt crisis and Greek talks: live – Telegraph.  Talk in the US media that this has been resolved turned out to be wrong (how unusual–snark!).  As per usual, the creditors holding Greek debts are not so quick to lose all their future money.  This is normal, of course.

Only in some sort of fantasy land of eternal plenty to infinity, do we see people running up immense debts and then skipping paying for anything.  Far from nothing happening, a lot happens.  Credit vanishes sometimes for hundreds of years.  Societies collapse.  Governments disappear.  Wars rage.  Revolutions and riots surge.  Millions and millions of people can die in horrible ways from starvation, being bombed, driven out of their homes, etc.  No small matter, going bankrupt.  It is huge.  Very huge.

Of course, everyone wishes for a world where credit comes from thin air and if you don’t pay it off, nothing happens and you get to keep all the physical goodies.  Alas, this is a dangerous world and credit has to mean ‘capital’ and debts means ‘honor’.  When this is lost, society collapses.  The US banking system was redesigned so it could operate off of thin air with virtually no real capital just lots of free credit courtesy of the Federal Reserve, the US government housing loan buy-up programs and wild government spending well over tax returns coupled with ZIRP lending rates.

This has caused the value of the dollar to collapse in international oil and other energy markets which, in turn, is fueling great inflation in food, fuel and other life-sustaining systems.  And it will only get worse since both the Federal Reserve injects more free money into our economy and the Bank of England injects £50bn into its red ink soaked economy.

Click here to see the Bank of England’s glittering stash of £156BN in gold bars stored in former canteen under London which is a rather funny Cave of Wealth and Death location for this inert mass of shiny metal.

There is no end to the mess in Greece and the people are now suffering very greatly:  Greek unemployment soars above 20pc. Youth employment in Spain, Italy and Greece is now over 30% and even 40%.  Pensions are vanishing as well as jobs just as it has here for the last 20 years.  In the US, manufacturing jobs have been cut by over 50% due to offshoring and wages have fallen by at least 50% and kiss those union pensions goodbye.  In Japan, nearly all auto export jobs are being shipped out due to the high value of the yen:  Toyota to move Highlander output to Indiana from Japan in 2013 – The Mainichi Daily News but this is not a revival of jobs here, Japan still exports these same vehicles from South Korea and China to the US.

The Feds announce $25B settlement over foreclosure abuse which is actually a bribe since no one is going to prison for creating, running and massively defrauding the entire financial condition of the entire planet earth.  So, the creeps who deliberately engineered this catastrophe get off scot-free and virtually nothing has been really reformed, their beloved monster, the Derivatives Beast, still lives and grows bigger and bigger.  The top 10 banks in the US and EU are bigger than ever.  Nothing really has been fixed.  The US public pays for this because most of the bad housing loans were removed from the private banks and stuffed into Fannie Mae and Freddie Mac where it was whacked with a hatchet, blown up and then burned to a cinder.  We, incidentally, get to pay for all of these losses and the pain from this is only just beginning to bite us as the debts of Greece are doing to them:  In Greece, the crisis is making people ill (literally)

Imagine for a moment taking a 40 percent pay cut. Then suffer an increase in sales tax to 23 percent. Add on increased rates for electricity, a new tax on heating oil and the cost of a gallon of gas hitting almost $10. Oh and your pension is not secure, and your kids stay home because there aren’t enough teachers. It is enough to make you sick…

…Nikitas Kanekis is the director of Doctors of the World, a charity that runs health clinics. He has the genteel manner necessary to be a pediatric dentist, but the economic decline has unsettled him. “We have seen four times the number of Greek patients over the last year,” he said. “We are afraid the humanitarian crisis can develop into a humanitarian catastrophe.”

It may already be happening. The department of health reports that suicides are up 40 percent. And violent crimes including murder are up almost 100 percent. “We have all the characteristics we see in big cities in the Third World,” said Kanekis. “People with no shelter, starving people and people looking for doctors and medicine.”

Many Americans are getting a 40% pay cut!  The Federal Government that spends money like there is no stopping the printing presses, is suddenly demanding we go without medical care, repairs, money for natural disasters and a host of other things because we don’t have money for that but we have money for training Iraqi cops or running the world’s stupidest embassy filled to the gills with CIA assassins, privatized contractors and assorted hanger-ons.  We have infinite money for even more military bases all over the planet as well as yet another war this time with Syria and then on to Iran…yes, we will pay dearly for all of this.

Millions and millions of Americans will die in the not too distant future thanks to wild spending on wars.  We can forgive our trillions in debts but this won’t make life nicer, it will make it PURE HELL.  Capital will vanish.  Valuable things will be physically removed and the country stripped of anything portable.  Our navy will be as small as Britain’s.  Note that the elites there are making lots of noise about the Falkland Islands this week!  Talk about insanity.

But nothing is more insane than our best ally and overlords in the Middle East.  Israel Works With MEK to Kill Iranian Scientists is not a joke: the Israelis are terrorists and they support and fund and train…terrorists.  And we let them, we approve of this and we do nothing to stop this while we wail about Syria or Libya.

Much of what the Iranian government knows of the attacks and the links between Israel and MEK comes from interrogation of an assassin who failed to carry out an attack in late 2010 and the materials found on him, Larijani said.

The U.S.-educated Larijani, whose two younger brothers run the legislative and judicial branches of the Iranian government, said the Israelis’ rationale is simple. “Israel does not have direct access to our society. Mujahedin, being Iranian and being part of Iranian society, they have … a good number of … places to get into the touch with people. So I think they are working hand-to-hand very close. And we do have very concrete documents.”

As it has in the past, Israel’s Foreign Ministry declined comment. Said a spokesman, “As long as we can’t see all the evidence being claimed by NBC, the Foreign Ministry won’t react to every gossip and report being published worldwide.”

And here is news we don’t get to see in the US and we will never see here for it is ignored entirely by our own media owners who are extremely biased:  ‘Death to Christians’: Suspected Jewish extremists deface monastery.  It is known only in a few Western media outlets that Jews in Israel regularly abuse Christians of all types, not just Palestinian Christians.  Jews in the US who are always on the lookout for religious discrimination are suddenly struck blind when they look in the mirror.  This has to be stopped.

Recently, the NYT finally had a small flurry of stories about Jews abusing each other.  Yet, when it comes to abusing everyone else, silence returns.  Questioning themselves as to why they are evolving into intolerant, violent bigots, is life and death for the entire Jewish community from the most ‘liberal’ to the far right wing lunatics.

Back at World Military Domination Headquarters, the WP, is this story:  CIA digs in as Americans withdraw from Iraq, Afghanistan.  Here is a map of their bureaus all over the earth.  Note that virtually all of them are in the middle east arc, with a few in the EU. 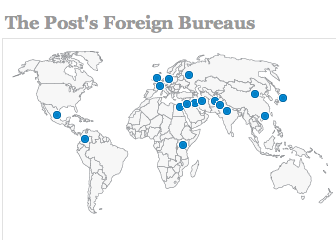 Now for the Hypocrite Award of the month:  Obama Sends Bahrain Arms Despite Repression.  It is OK to kill Shi’ites.  Especially if they are friendly with Iranian Shi’ites.  The NYT had a huge editorial by the former head of the illegal assassin gang, the Mossad, today.  In it, he demanded the US attack Syria because this will make Israel stronger by weakening the penned-up Palestinians even further and will make it easier for Jews to attack Hezbollah in Lebanon yet again…and then it will make it easier to attack Shi’ites at their home base in Iran!  Whoopee!

I will note the warmongering Zionists running the NYT didn’t have an editorial from any Shi’ites of any sort on any topic!  They remain mute.  Unable to change stupid tactics for smart diplomacy, the CIA continues the incredibly useless assassin drone program in Pakistan:  Four Killed as Another US Drone Strike Hits Pakistan while Congress OKs Proliferation of Drone Use in US Airspace.  We will all eventually be Pakistanis.

First used in Egypt thanks to the US giving it as a fatal gift for crushing peasants, students and housewives demanding change, now, thanks to credit problems, we will soon see‘Banned’ nerve gases to be used on UK streets.  Interesting news about our empire:  U.S. likely to scale down plans for bases in Japan and Guam which is amazing.  The Okinawans hate our bases there.   So finally, Japan demands early return of 5 U.S. military facilities in Okinawa.

Back in our country, I was aghast when the US officials who snoozed away for two hours during the 9/11 attacks, they decided to rebuild huge towers in the same spot.  It is a financial disaster which is no surprise to me:  World Trade Center: Consulting Firm Has Allowed Project’s Costs To Soar Out Of Control, Auditors Say.  Duh!  What on earth did they expect to happen?  The occupation of Iraq soared way out of control to the tune of nearly a trillion dollars!  And Afghanistan?  Nearly as bad and it is continuing.

Meanwhile, China to forge stable partnership with Canada in energy sector, Premier Wen – Xinhua | English.news.cn.  We are sooooo doomed.  If Canada begins really hooking up with China we will have to compete with China for our neighbor’s oil and gas not to mention other export stuff (plywood, for example).  Not that our government is paying attention to anything except for Syria and Iran.  The twin demons that torment the petty, treasonous minds of our ‘elected’ officials.

17 responses to “Greek Crisis Continues And So Does US, Israel and UK Warmongering”