EU ‘would be allowed to change countries’ budgets’ under draft plans—most of the text below.  The EU is changing form rapidly as the Fourth Reich slowly comes into being with the Germans protesting loudly that they do NOT want to be the core of this new empire since it means taking on all the debt liabilities of foreign nations.

In the British news we see these clashing headlines:  Germany ‘risks being centre of empire’  while Angela Merkel rules out eurobonds for ‘as long as I live’.  The Germans remain rightfully paranoid of flash inflation.  They learned this the hard way back in the 1920’s when the seemingly easy solution to paying for war indemnities and debts was to print money as fast as possible.

These paradoxes abound.  For example, German thrift and care and refusal to run up big debts has ironically made the euro very strong.  This led the more proliferate spending countries on a wild party spending spree from hell.  Europeans happily hopped onto CO2 spewing jets to vacation all over the world, for example.

But their export markets suffered as Asian exports flooded in while they were unable to compete overseas with trade rivals.  Japan has the same problem today, too.  Strangling spending at home while exporting has ironically made the yen strong.  The more Japan cuts home spending and the more they increase exports, the stronger the yen will be which kills PROFITS on exports due to exchange differentials.

The mess in Europe gets worse by the day as every nation there goes under due to the strong euro’s credit bubble:  Debt crisis: Moody’s downgrades 28 Spanish banks.  Cyprus also asked to be bailed out.  The EU overexpanded to a ridiculous degree after the fall of the USSR.  Quadrupling in size, it sucked in many nations that were unable to integrate properly.

So all are going down simultaneously just as they sank the Soviet imperial enterprise.  The EU growth gave the illusion that the EU was the richest nation on earth when in reality, it was more like the Austro-Hungarian empire before WWI: at odds with itself, no sense of unity of purpose or economic harmony, and no loyalty to the empire at the core.  And incidentally, all this started WWI.

As the richest elites on earth tell the Japanese people they must double their sales tax, British students have to pay  more to go to school and US citizens should never collect Social Security, we have this  news from the Russian media:  PressTV – British queen gets pay rise despite recession

The Queen’s annual pay is about to jump by 20 percent from 30 to 36 million pounds, at a time when Britain is in recession and many families are feeling the pinch of higher household costs and taxes…Her property holdings, known as the Crown Estate, posted a record profit of 240.2 million pounds ($377.4 million), a net rise of 4 percent in the year through March 2012 largely due to strong tenant demand for its shops in the up-market Regent Street and St James’s districts of London.

One of her pirate islands is scared of EU banking controls being imposed on them so Jersey should prepare for independence from UK, warns minister as a way to exit the EU.  Meanwhile, RBS computer failure ’caused by inexperienced operative in India’ which is funny as hell since everyone is offshoring computer work to India even though this may be suicidal.

Now here is the text of the New Holy Roman Empire of Europe: 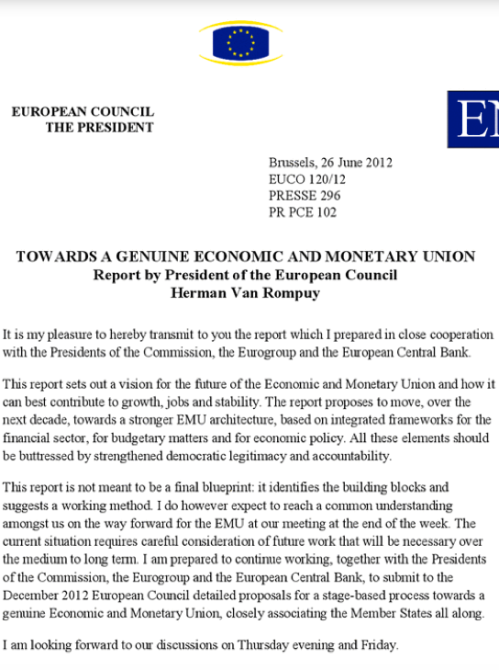 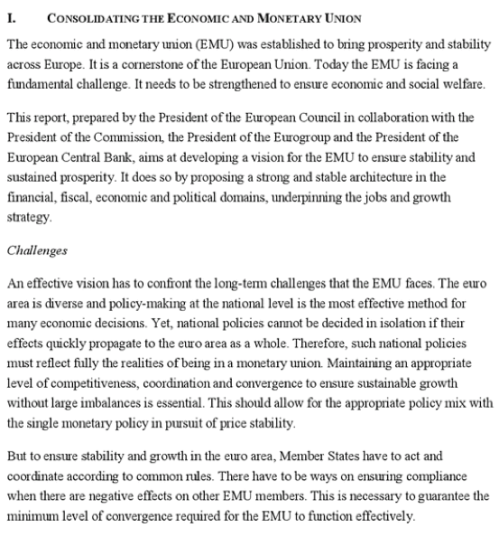 Of course, how will they act and coordinate themselves?  Democratically speaking, the mechanism for rule is being gradually made more and more remote from the voters who supposedly are allowed to debate these issues.

We see with Greece how this works in a pinch.  They get to vote and then are yelled at until they vote ‘correctly’.  In the US we fixed this by having a thoroughly corrupt system with a complicit media assisting rich people in their hijacking of our democracy.  Our voting choices become smaller and smaller and the candidates more and more alike at least, once the voting is done.

Whatever pre-election positions taken, the end result is the same which is why Congress is profoundly unpopular today. 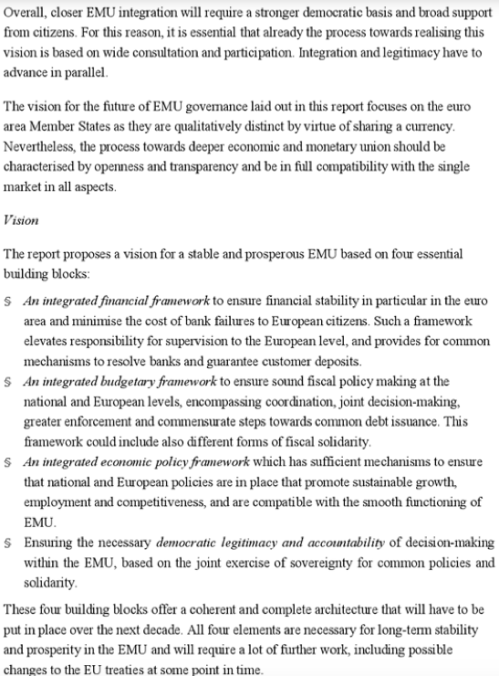 HAHAHA…whenever elites talk about integrating economic and political systems, they have to pretend they are most anxious to hear from the voters.  In fact, they would dearly love to dispense with all of this and go back to the good old days which is why the Queen of England is so important and has to reproduce.

That is, she is the top of the ruling elites just like the Emperor of Japan.  Useless for anything except propaganda spectacles, these rulers give cover for the very rich who want to be viewed as gods but dare not openly say this in public.  So they encourage us all to kow tow to the Queen instead.

Oh, by the way, the commoner who comes from a rich family who married the Prince of this Queen spent her daddy’s pounds on her frocks, around $300,000 worth so far and going to the moon.  Recently, the Queen’s household rules were published telling the Consort of the Prince she must curtsy in PRIVATE to the royal brood, all of them, even the rude ones.

Puts her in her proper context as above the servants but below the royal dogs.  Back to the creation of the new Holy Roman Empire: 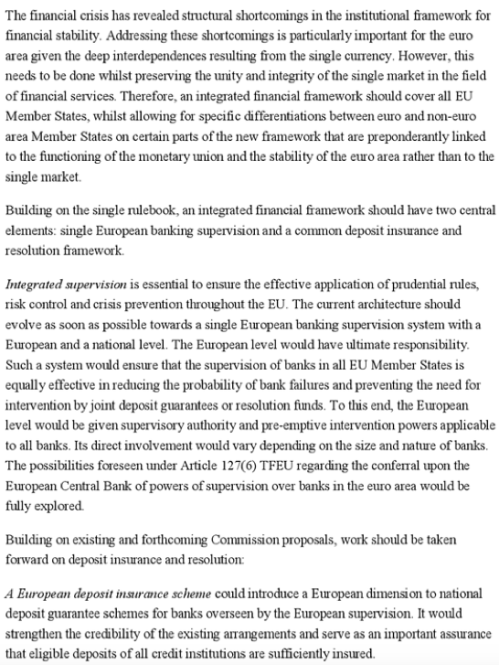 Note that this new government will control RISK.  Risk is where money is made.  The best risks of all are when profits are guaranteed by the state so that there are never any losses but the payoffs based on risk remain so we get high interest rate loans which are set high due to risk being made risk-less by the state but the holder still is indemnified as if they were risky!

Even so, the pirate islands surrounding the banking system are up in arms and scared to death but thanks to the Queen they can be ‘sovereign’ and thus, out of control forever under her royal umbrella.

Now on to the US to see how the rich get Congress to do stupid things: the GOP whines all the time about how evil food stamp users are and how wasteful, etc.  Meanwhile, 50% of all foodstam money in Oklahoma goes to Walmart which is headquartered there and want secrecy about what is being bought.

So here is an interesting story about this secrecy and why it exists.  Lobbyists toil day and night to hide where this Federal money is going because it is a gravy train for them and is destroying the health of the poor:  Top secret: $80B a year for food stamps, but feds won’t reveal what’s purchased – Washington Times

The USDA is notoriously secretive about who receives its money, relying on weak legal reasoning, said Steve Ellis of the watchdog group Taxpayers for Common Sense.”

USDA hides behind a specious proprietary data argument: The public doesn’t want to know internal business decisions or information about specific individuals’ finances,” he said. “The USDA sees retailers, junk food manufacturers and the big ag lobby as their customers, rather than the taxpayer.”…Legislation seemingly designed to protect the industry goes so far as to say that anyone who releases the amount of food stamp dollars paid to a store can be jailed.

Told that the newspaper would not pay, the CFO’s office then said that only JP Morgan, to which it contracted out operations, had access to the store totals and that the office had never looked at them. After six months of the local government attempting to extract the information from JP Morgan, the District finally said that releasing the information would be illegal.

Super-duper top secret information!  Holy cow.  What if the Chinese, Russians and Iranians learn what our poor buy in Walmart?  Can’t have that!  And note who DOES have this secret information: JP MORGAN, of course!  And do they not use this?  Do they not share this information with the big retailers and corporate food entities?  Of course they do, for a fee, of course.

The one entity that cannot get to this information is the American people.  We are cut out of this business even though 100% of it is paid for by us via taxes and higher and higher debts.