I was outside tonight at 8:30pm to observe the effects of Hurricane Sandy in a near-full moon sky.  The conjunction of a full moon and the arrival of a major hurricane is a once in a lifetime experience.  Only once before, when I was a child, have I seen this cosmic effect!  The large ring is actually much, much bigger than shown here.  The moon was well above the horizon but the ring reached nearly to the North Star, it was so huge!

I stood in the driveway and spun around again and again to look at it.  The rings are perfectly shaped with sharp edges.  The high atmosphere moisture caused this effect.  There is a HUGE amount of moisture in the high atmosphere from this big, big storm!

All day long, I was working hard to finish a number of projects outdoors that had to be done before winter but this year, I had to do everything all at once due to this hurricane coming.  So I spent most of the day on the roof and watched the sky as it shifted and changed.  Here is a collection of pictures showing how things changed each day:

Yesterday, Friday the 26th, I took a picture of some billowing clouds that were moving in an arc down the Hudson Valley.  The sky is already quite hazy with atmospheric moisture. 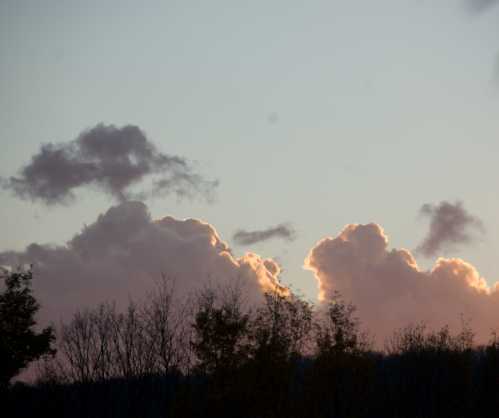 At dawn, as per all old sailor’s tales, the sky was very pearly and pink, a sign that very high atmosphere is there.

As we watched the dawn break, it became very pearly indeed.  The long line of clouds moved quickly overhead, again, in an arc pattern.

Today, the 27th of October, the air was very thick indeed.  It definitely carried the sweet smell of the Caribbean.  It reminded me greatly of the smell of the air during the monsoon season of my childhood living near the border of Mexico.

I took a picture from the roof showing the very thick contrails of jets.  These were very broad for the jets were flying through this Caribbean soup up there.  At sunset, there was a circular rainbow around the sun which was very pretty but by the time I got the camera again, it was obscured by clouds.  Note the pearly sunset! 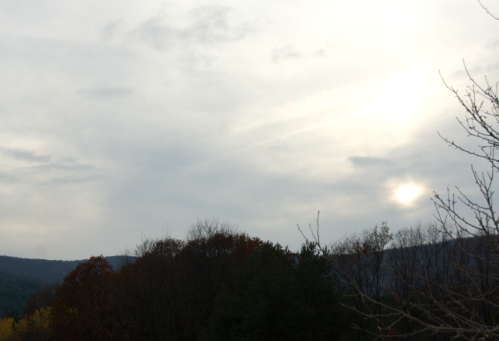 There was zero wind at this point.  It was as if the entire mountain was holding its breath.  Even now, there is no wind…yet..

Here is a GOES satellite photo of this immense, amazing storm:

This is one huge storm!  In the upper atmosphere, it has already merged with the cold front’s storms and these are being increasingly compressed together.  This compression of dense moisture will cause massive deluges.  Here is a GOES photo of the entire Western Hemisphere: Interactive GOES East Water Vapor Weather Satellite Images

By any measure, this is a huge storm!  My brand new grandson is right in the path of this monster storm and I might have to go down to NJ to help move family out of danger so I may be offline for two days (or more!).    We may all be offline for several days if the storm gets worse!

This is a FULL MOON HURRICANE.  This means, the ocean will be bulging towards the moon and as the hurricane shoves ashore, this bulge of higher than normal water will cause major flooding and add 14+” of rain and you get a disaster.  Everyone on the East Coast must take this storm seriously.  I have lived through a number of hurricanes over the years and none of them were jokes.

Remember: some of the worst flooding comes after the storm ends.  The water it drops in various watersheds has to come back to the ocean where it was all birthed like Venus.  This can be most devastating.  When Irene hit, everyone was saying, it wasn’t a huge hurricane.

It was very huge!  It dropped 11+” in my region and in the Catskills, up to 15″.  It was a terrible catastrophe and for the first time living in Berlin, NY, I was nearly unable to leave town except by boat or helicopter!  Very bad indeed.  I do hope this hurricane doesn’t copy its near twin sister from last year!