The Federal Reserve has completely changed its formative activities since the banking collapse. It is now the capital holding tank for international speculators and banks.  That is, it works not for us but for them all. The Fed is also hiding the dire condition of our government by openly ‘buying’ US government debt instead of selling it all to China and Japan.  This means our trade deficit which was floated on US government debt bonds bought with profits from mostly one way trade with the US is no longer happening.  This is a serious, serious hole in our fiscal bucket, by the way, now that both the government of Japan and China are using US trade dollars to buy up world resources with loans from their own central banks to help this along.

He’s made his third round of quantitative easing open-ended — meaning the program doesn’t have a set time frame — and signaled he may adjust its pace if needed. In December, the policy-setting Federal Open Market Committee added outright Treasury purchases to its mortgage-bond buying, saying it would acquire U.S. government debt “initially” at a pace of $45 billion a month on top of $40 billion in home-loan debt...“The extra flexibility will work both ways: They can stop sooner or keep going longer” than if they had set out parameters from the start, said Dana Saporta, U.S. economist at Credit Suisse Group AG in New York.

See?  This is an ETERNAL change, not a temporary emergency action.  This is a radical departure, not more of the same thing but bigger.  This is new.  And where was the debate?  I didn’t see it much. This sailed through without so much as a peep. The same people who yell nonstop about government spending are silent about this for the most part. That is, Congress seems pretty unconcerned.

The Banking community loves this, people who want infinite government spending love this, people who want eternal war with no tax hikes love this, who hates this aside from the old guard ‘gold standard’ people and a few libertarians? The need to make the Fed the funding machine for war is paramount and never mentioned except by maybe Ron Paul. This machine funded WWI, WWII, the European debts from both mega-wars, the Cold War, the Vietnam War and the War on All Muslims.  And it is also responsible for the collapse of our financial welfare system as all systems break down more and more.

Here is a ‘liberal’ editorial supporting the debt state that never mentions our huge trade deficit but does recognize the need to stop the madcap wars:  E.J. Dionne: America is not in decline or retreat – The Washington Post

Obama’s harshest critics are essentially charging that he has accepted American decline. They are convinced he wants to pull back from the world and slash the Pentagon budget to make room for more domestic spending. He’s often accused of making the Western European choice: less for the military, more for the welfare state.

News to E.J. Dionne: the US is in decline, severe decline.  All data points to the obvious. Our industrial base has nearly vanished.  Our natural resources are being sucked dry. The middle class is disappearing. Our children do worse in school than foreign rivals. Our trade deficit is horrendous. Our debts are the biggest on earth, bar none. We have the least sovereign wealth of all nations and the most expensive military, healthcare system on earth. When Reagan talked merrily about morning in America, what he brought was doubling and quadrupling the national debt, trade deficits, inflation and wars.  We have been on the wrong road since Reagan and we are very much still on the wrong road.

Our country wasn’t really weak after Vietnam, it was in fiscal trouble due to war spending while tax cutting and this caused inflation which was fixed by killing the unions, offshoring our industries and above all, using the stupid floating fiat currency which caused our immense trade deficits.

And we are perched on the edge of the Congressional Fiscal Cliff but that is all about cutting social services and denying the Northeast the sort of hurricane aid the South has enjoyed for the last 60 years: Obama Says G.O.P. Won’t Get ‘Ransom’ to Lift Debt Limit.  He is digging in his heels because the average American wants this spending.  But NONE of the leaders in DC are at all concerned with the core problem which is how our floating fiat currency has caused us to lose all our sovereign wealth via this floating fiat currency system we are using today. From the Federal Reserve graphs: 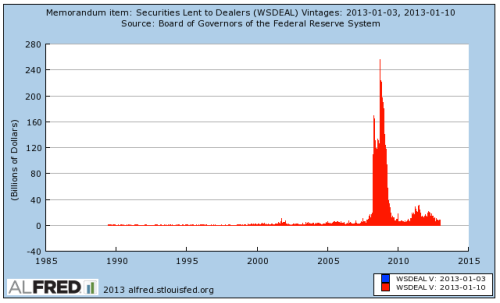 The Fed kept Wall Street and the City of London’s traders alive via this rescue operation which dwarfed anything that ran before.  What was a ‘spare change’ business of rescuing people from their own follies turned into a gigantic scam to capitalize Wall Street gnomes who were being gored by the Derivatives Beast.  It shot up from being less than $5 billion to a quarter trillion.  Zero gratitude from the gnomes when they were rescued from their deep Cave of Wealth and Death disaster. 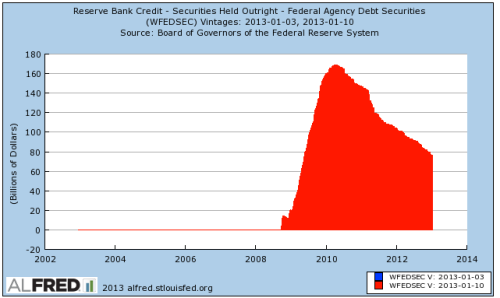 The sudden huge mountain of securities held by the Fed still remains, this was ‘only’ nearly $200 billion. 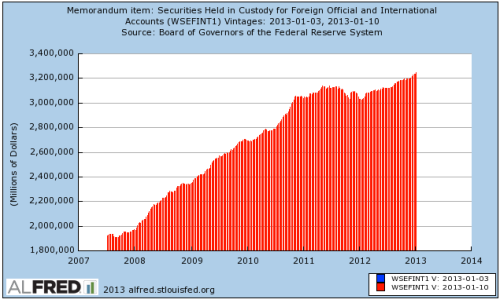 And this is hideous and amazing and ignored: the $3.2 TRILLION in securities held in custody from those noxious and utterly evil foreign banks and bankrupt countries in the EU system. 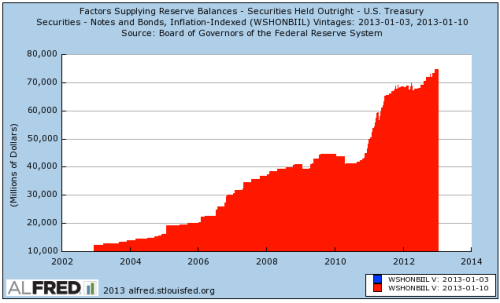 And the Fed used to hold only a handful of Treasury securities but began buying it up rapidly EXACTLY the same time the Bush Jr. tax cuts, so beloved by the entire GOP and which the GOP still wants to keep, began screwing up things while we went into two very expensive, privatized wars.  It is now at $75 billion and going up. 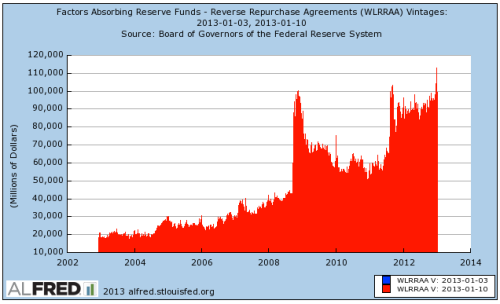 Same here, a sudden shoot upwards of repurchase agreements which continue high.  There were virtually none before the Bush tax cuts. Now on to Krugman again:

Stewart mocked the idea on his show last week, saying “we don’t need some trillion-dollar coin gimmick, we need a way to get the world to take the U.S. dollar seriously again.”…

Krugman has defended the coin as a “silly, but benign” way of preventing Republicans from taking the nation’s economic health hostage by demanding spending cuts in exchange for raising the country’s borrowing limit.

As usual, Krugman is all defensive yet he, himself, calls the coins scam ‘SILLY’.  Yes, it is silly.  But NOT ‘benign’.  It is an end run around our political system with dire consequences.  The world doesn’t hate the US dollar, they all want it as strong as possible and this is where the silly man, Jon Stewart, is being stupid.  Both men don’t understand how money works and why our trade rivals torment themselves in order to make the dollar stronger.  They do this to eat up our industrial base, take our sovereign wealth and to become the owners of America.  Duh.

Because neither man wishes to understand this salient and obvious fact that all our foreign trade partners understand perfectly well shows us how hubris works.  They all think the US is strong, special and smart.  This is foolish.  And sad.