US Media Notices Japan Continues To Collapse While Inflation Looms

For many, many years, at least two decades, I have written extensively about the deflationary trap Japan fell into and cannot escape.  Japan is literally dying.  It is literally being ground apart by both Mother Nature and the Japanese Industrial complex disasters.  And it is being propped up by the US as a means of defying dynamic, growing, active China.  This is a total failure and easy to see why.  A dying, disintegrating culture can’t project power or run things, it is in barely-survival mode and rapidly literally dying.

Now, our main media has finally noticed the obvious.  Here is today’s main article from NYC about this huge ongoing collapse of the world’s once #2 economy:  One Obstacle Won’t Budge in Japan’s Fight With Deflation – NYTimes.com

Since taking office in December, Prime Minister Shinzo Abe has made fighting deflation a priority, pumping the Japanese economy with cheap money and bolstering public spending in a bid to kick-start growth.

Such moves have helped stoke the prices of luxury goods like Ferraris, golf club memberships, prime real estate and vintage wines. But so far, the government’s efforts have not had much effect on everyday items, like a can of soda…

So far, the rally in Japan’s stock market has not significantly rubbed off on wages or wealth in a country where just 15 percent of households hold shares, according to a recent Bank of Japan survey. And despite the rising economic sentiment, consumers remain thrifty; the government reported on Friday that consumer spending had cooled.

This really, really, REALLY irritates me!  Inflation is theft and only if workers are union organized and very powerful, can ‘inflation’ mean more economic activity.  That is, workers demand pay raises and then spend it, fast.  But when workers are being crushed, wages are falling and 50% of the under-30 population is part time labor and the retired workers are not replaced but instead, robots or moving jobs overseas means less and less profits go to the workers…who then have no money to spend.

So…when the nasty, evil elites at the top deliberately devalue the currency so they can make bigger profits importing and exporting goods, this hammers the workers who can’t cope and who then cut back more and more mainly, by not having any children.  And so the nation literally dies.

Like the US, Japan has had raging inflation in key areas namely, rents and fees as well as taxes such as doubling the sales tax.  The average Japanese no longer can afford Toyotas and more and more are riding bikes and if you explore Japan via Google maps, you can see the many bikes being used in Tokyo and cars are increasingly scarce.

It looks more and more like Maoist China!  The NY Times has been pushing for inflation and I find this hilarious since inflation has HAMMERED me on my fixed income, big time.  With virtually no rises in SS or pensions thanks to rigging the inflation stats so it doesn’t reflect reality, life is very hard now.  I used to heat with gas, now I go forth every summer to produce a mountain of firewood because I can’t afford heat anymore, for example.

I am not alone.  Everyone I know has the same problem and is trying desperately to fix things via burning firewood as if this is 1813 and not 2013.  Of course, the staff at the NY Times doesn’t live in my universe even though my neighbors and I live fairly close to Manhattan.

Seems that some economic forecasters have figured out what ails Japan…sort of…too bad most are anti-union so they don’t make the ‘work/pay’ connections:  Central Bankers Gone Wild | Thoughts from the Frontline Investment Newsletter | Mauldin Economics 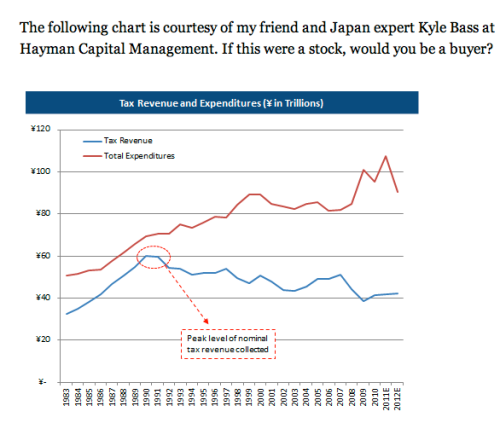 Geeze!  As with the US, tax revenues have fallen while spending which mainly benefits the elites and their business with the government, shoots upwards!  And then the workers are blamed for all of this, as we are in the US.  The Japanese elites grew very rich playing this game just as our elites have hogged much of the economic pie.  The solution is obvious: tax the rich heavily!

Instead, the Japanese and US elites have decided another course: cause global warfare, agitate for imperialist games, threaten other Great Powers and act the bully.  Ooops.  The Japanese elites didn’t expect the obvious to happen!

When they agitated the Chinese leaders, they agitated the entire Chinese as well as both Koreas’ people!  Who are now running a de-facto boycott of all Japanese goods.  China, not the US, was Japan’s #1 customers last year and this is rapidly collapsing to the despair of the elites who backed aggression against China.

Now, they are backpedaling after insulting not only China and both Koreas, but the US and our military, accusing us of using sex slaves, for example.  Now, Abe’s staff are grinding their teeth while blubbering about how a Strong Japan will be no threat to Asia, says defense minister ‹ Japan Today: Japan News and Discussion

“Some say Japan is tilting toward the right because of these initiatives. Moreover, we sometimes hear criticism that Japan is abandoning its identity as a pacifist nation and is attempting to challenge the existing international order,” Onodera said.

“These views are total misperceptions,” he said. “These efforts are crucial in the pursuit of our national interest, which is to maintain and strengthen international order based on fundamental values of freedom, democracy and the rule of law.”

You don’t strengthen international order by making unilateral territorial demands backed by military force!  I think Japan will never learn this.  But they have powerful teachers next door who will drive home this lesson.

Now to another topic concerning Japan and China and our military/industrial rich bastards at home.  Boeing.  One of my first stories was boing boing boeing – Culture of Life Financial News which I wrote years ago.  This is all about how our US trade reps are actually Boeing salesmen and this business of selling jets is crashing, big time, with Japan and Israel forcing us to open factories in their countries and then China demanding the same things.  So…in the news today is this:   Boeing shifting engineering work to California, S. Carolina | Business & Technology | The Seattle Times

Boeing said it will transfer a chunk of engineering work employing some 300 people from Tukwila to Long Beach, Calif., and will create engineering centers for future work in South Carolina and possibly in Kiev, Ukraine.

HAHAHA.  The usual game: move things to the former slave states, exploit the workers, get huge tax breaks from the GOP rulers down there and then…hike off to Russia, China, wherever.  They don’t even bother hiding this!  Note they do say, ‘POSSIBLY’ Kiev.

Right.  HAHAHA.  The workers for Boeing are very unhappy, they know this game very well and are, thanks to Reagan, helpless to stop this as was Detroit and much of the Midwest and all steel workers, etc, etc.

Now on to India, supposedly was going to best China and be smarter and richer…HAHAHA, yeah, right:  India records worst GDP growth in a decade which doesn’t surprise me at all.  Have a huge population boom and huge racist society with the underclass totally cut off from economic participation…sounds like what the US is becoming.

And is China falling apart?  Nope.  China Manufacturing Tops Estimates in Sign Growth Is Stabilizing – Bloomberg.  Again, no surprise to me.

Last of all, Africa has lost $1.2 trillion in dirty money, Nigeria tops list as ‘aid’ pours in, the money pours out into foreign bank accounts exactly like our own elites are doing to North America.  We are all in the same boat and the captain is a pirate.