Everyone is talking, mostly while shivering in an early Autumn here in the US with blizzards already in the Pacific Northwest.  Naturally, this cold weather heralds the UN climate prediction report that claims that we are going to roast to death for sure.  Appended to their alarmist report is the contrary one talking about global cooling.  As a footnote, the ‘consensus’ of the global warming group is 95-100% certain we will roast, not freeze.  But tell that to those of us who are feeling the cold breath of the Ice Queen earlier than normal.  The trees here are changing color fast this fall here in upstate NY.  And there are still near zero hurricanes, too, while there is a persistent La Nina event. 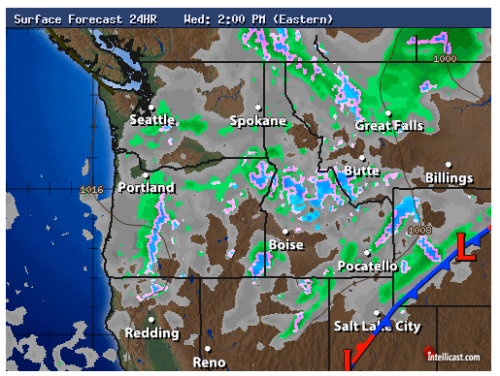 This is early!  And confounds NOAA predictions that all this winter will be warmer than normal.  I know that it is colder than normal already so far and all summer was cooler than  normal, too.  The ability to make accurate predictions has fallen badly over time as climatologists insist on seeing warmer and warmer weather and more hurricanes, not no hurricanes at all.

The August prediction so far has correctly predicted the Northwest would have a warm September. Through Wednesday, the average temperature was running 4.4 degrees ahead of normal.  But going into October, it now predicts a rainy start to fall, with above average chances for a wetter than average month, and equal chances for temperature being cooler…However, expand the forecasts out to 90 days and now all of a sudden they are picking up a signal indicating slightly greater chances of a warmer than normal late fall and winter across much of the West — particularly the Southwest, but the western Pacific Northwest is on the edge of the warm bubble.

In a panic, after seeing their predictions collapse, they suddenly reverse gears and admit to the obvious.  Here is today’s hurricane tracker:

The wet spot in the Atlantic has a less than 20% chance of turning into a tropical storm of any sort.  The collapse of the Atlantic Hurricane season of 2013 is now epic.  Virtually nil which is highly unusual.  And doesn’t fit the computer model at the top of my story which shows predictions of many more hurricanes if global warming is happening now.  The model for more hurricanes is one of the key stone pieces in the global warming model.  And failure to have even one hurricane has huge implications.

It means the computer models are totally wrong.  Fixing this is fairly easy, all they have to do is to include sun spot activity in the models.  Sunspots do not cause climate change, say scientists in 2009.  Don’t Blame Sun for Global Warming, Study Says in 2006.  The erasure of the sun as a major driver of all climate change for the last several billion years is quite a magician’s trick only it fools mainly global warming believers.  This is sort of a ‘who do you trust, your own eyes or me?’

150 years of astronomy thrown out the window.  Denial of sun spot activity is key to keeping all the computer models for warming working.  So, taking a deep breath, we have the official UN report that we are all going to die of heat stroke:  Climate Panel Says Upper Limit on Emissions Is Nearing – NYTimes.com

But the new document also acknowledges that climate science still contains huge uncertainties, including the likely magnitude of the warming for a given level of emissions, the rate at which the ocean will rise, and the likelihood that plants and animals will be driven to extinction. 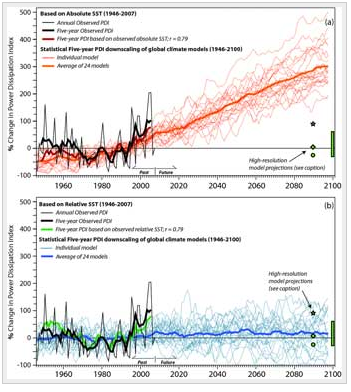 Here are two graphs showing the global warming one and the alternative one that shows things staying pretty much normal.  People get to decide which is more true to nature.  Except we have zero say in all this.  The people who want to tax energy and cut off access to energy in the cold northern hemisphere countries is very strong.  The only reason the tropical, warm parts of the world support taxing heating energy costs is because the very rich promised them a whole lot of money in the future if they tax people in cold climates.

A win/win for the warm places!  They get our money and they enjoy warm weather while workers in the norther parts freeze.  Make no mistake: this global warming business is all about enforcing a freeze in the north.  Here are some news clippings from the previous very cold cycle which was a mere 40 years ago:  1975 : Tornado Outbreaks Blamed On Global Cooling | Real Science

1973 : 100% NSF Global Cooling Consensus | Real Science  and 1978 Consensus – Warm Winters Are A Thing Of The Past | Real Science are reminders that predictions are a tricky thing indeed.  One of the predictions lately made by ‘scientists’ was that we would have both a longer and deeper el Nino events and more hurricanes.  Both of which are not happening:  NOAA El Niño: Research, Forecasts and Observations from the recent past:

Developing La Niña Conditions Expected to Continue
Sat, 10 Jan 2009 08:29:40 EST
During December 2008, negative equatorial sea surface temperature (SST) anomalies strengthened across the central and east-central Pacific Ocean. Convection remained suppressed near the International Date Line and became more persistent near Indonesia during December. Low-level easterly winds and upper-level westerly winds also strengthened across the equatorial Pacific Ocean. Collectively, these conditions reflect the development of La Niña. For the contiguous United States, potential impacts include above-average precipitation in the Ohio and Tennessee Valleys and below-average precipitation across the South, particularly in the southwestern and southeastern states. Other potential impacts include below-average temperatures in the Pacific Northwest and above-average temperatures across much of the southern United States. Details…El Nino Arrives Expected to Persist through Winter 2009-10

Thu, 09 Jul 2009 09:59:20 EDT
NOAA scientists today announced the arrival of El Nino, a climate phenomenon with a significant influence on global weather, ocean conditions and marine fisheries. El Nino, the periodic warming of central and eastern tropical Pacific waters, occurs on average every two to five years and typically lasts about 12 months NOAA expects this El Nino to continue developing during the next several months, with further strengthening possible. The event is expected to last through winter 2009-10. Details…

Except is faded very fast.  The following spring of 2010, the el Nino which was quite weak, faded fast and immediately a la Nina event began which is still ongoing:

We see that the ocean off the West Coast is colder than normal still.  And the la Nina which is supposed to be fading according to NOAA isn’t fading so far.  And note how we have near zero hurricanes in the Atlantic despite so many reports claiming that la Ninas cause increased hurricanes in the Atlantic.  This has to be resolved not via tricks or eliminating information.

The cause and effect of solar sun spot activity must be addressed scientifically, not fantastically.  It has to be taken quite seriously.  there is a near-100% chance we will eventually have another Ice Age.  History makes this very clear.  Perhaps our only chance to stop this is via more greenhouse gasses.  This is a life and death debate.  The other issue about the mass destruction of world forests is another issue entirely.

Too many humans in the warm tropics are mainly the drivers in this matter.  Elimination of forests is a serious issue.  And cutting off people from access to other fuels means more have to, like myself, resort to cutting down trees to stay warm.