A desperate Lawmaker breaks taboo by handing letter about nuclear fears to emperor infuriating the ruling elites who use this guy as their personal puppet.  The Emperor could denounce the militarization of Japan and the impending war with China!  He could also talk about Fukushima and shame the elites into doing something sane.  Instead, he does all the crummy little, goofy ceremonies while running back to his palace to hide under his futon.  The lawmaker who dared to do this was forced to apologize to the gang that is running Japan into the ground, fast.

“It is our country’s responsibility to share the experiences and lessons learned from the accident in Fukushima and help improve the safety of nuclear power in the world. We will help those countries, which call for nuclear cooperation with us, to ensure safety through assistance to improve systems and cultivate human resources,” Abe said at a joint news conference in Istanbul with Turkish Prime Minister Recep Tayyip Erdogan on the evening of Oct. 29.

They have vast experience with screwing up!  What a great resume.  Their cultivation of human resources is this:  TEPCO employee found dead in apparent suicide, the man was an engineer who jumped off the roof of the office building.  The other cultivation is to go to the Yakuza who then get guys deep in gambling debts to pay up by working there.  Lord knows how the others are being recruited.  Living conditions for these workers is terrible, they are all on ‘contract’ and get little pay after the Yakuza takes their cuts.

Now on to the information about the recent typhoon and how things fell apart at Fukushima:  http://www.tepco.co.jp/en/nu/fukushima-np/handouts/2013/images/handouts_131025_01-e.pdf 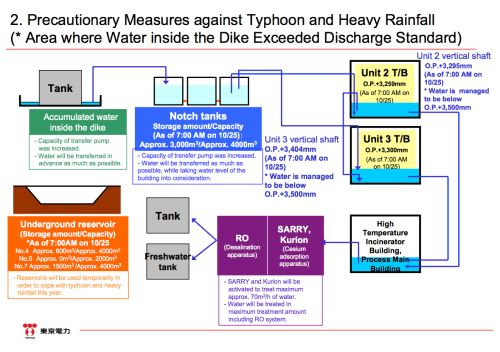 And here is how this grand plan sank like a rock:  Groundwater reached the surface of the ground on the seaside of reactor2 | Fukushima Diary 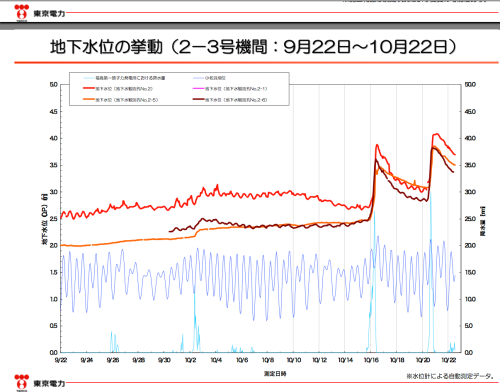 The groundwater level reached the ground surface on the seaside of reactor2 and 3 after the heavy rain of 10/20/2013, according to Tepco’ data.

To stop the contaminated groundwater flowing to the sea, Tepco is building the impervious wall on the seaside of reactor2 and 3 but it is retaining the groundwater. The groundwater level is rising.

In one of the observation holes in the area, the groundwater level reached above 4m from the sea level, which means it went over the ground.

Tepco’s spokesman announced “the site” didn’t report the groundwater came up on the ground at least.

Here is one of the high tech methods of keeping ground water from collecting: a tarp stuck to the roof of the water tank: 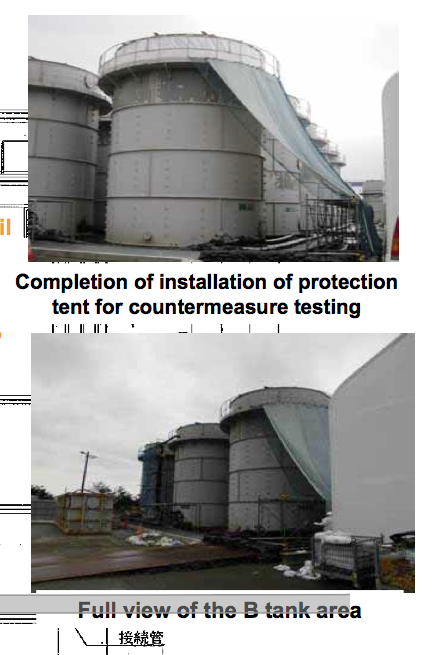 Wow!  Expertise!  HAHAHA…rats.  These clowns are now going to try to remove the damaged fuel rods. 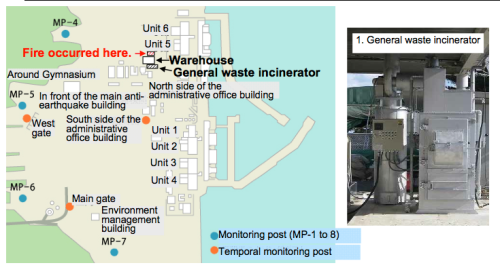 They claim, with no one checking to see if this is true, that only non-radioactive stuff is burned there.  But do I believe this?  Absolutely not.  So far, the government colluded in the past to burn radioactive materials all over Japan to ‘even the pollution out’ so everyone there gets exposed.  Even the stupid Emperor and his spawn.

And another page from the IAEA information given to them by the Fukushima Follies:  http://www.iaea.org/newscenter/news/2013/countermeasures160913.pdf 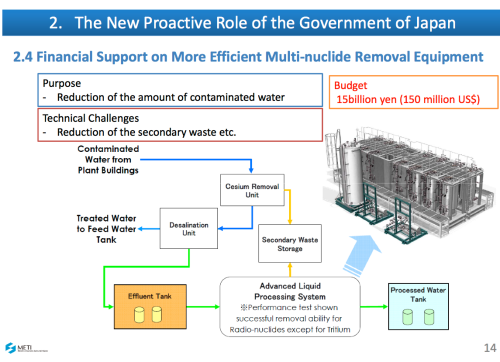 They spend more than this in one month on patrolling the islands falsely claimed by Japan.  There is no sense of ‘Oh my God!  We have to concentrate on Fukushima!’  No, this is pushed aside regularly and minimal money is spent fixing this and the work crawls along and the ‘freeze the ground’ gambit to stop the water flowing from the nearby hills won’t work, I guarantee this.  It may work briefly but not forever, it costs money and so far, spending money is not the plan for the Japanese overlords who don’t give a fuck how bad they pollute the planet.