The Washington Post published an editorial by the Japanese ambassador who is busy whitewashing the Yasukuni Shrine insult to all Americans who fought in WWII and all of Japan’s war victims.  Japan is also sort of in the news over the slaughter of dolphins using clubs and knives and the Fukushima mess…that is, not mainstream US news but on the internet.  The push to make Japan our good ally is following the same lines that Israel enjoys, namely, The gross censorship by our media, hiding terrible things so we can go to war again.  And the Washington Post is the worst of the lot and seems to get worse by the minute after Bezos, a huge exploiter of labor, owning it.

First, the news that doesn’t arrive on US doorsteps due to the overall censorship: Radioactive cesium found in Japan’s fish, seawater and isn’t getting better, it is getting worse.  Now, Tuna caught near California still have traces of Fukushima radiation and the other industrial pollutant that is so dangerous to sea life,  Mercury risk poses threat to Japanese dolphin hunt as it does the minke whales.

Luckily for these animals, the Sea Shepherd organization Stopped the Japanese Hunt in the Southern Ocean.  So the whales got a temporary reprieve.  There are no Chinese ships attacking dolphins or whales on the high seas.  The dispute between the US, China and others over who controls the open oceans is raging with the US fleet protecting mass murder of sea mammals.

To show how controlled our press is when it comes to Japan is easy.  The present hunting of dolphins is so many can be sent to work in captivity and then die young and this time around, a one year old white dolphin was seen frantically swimming in the cove with his captured mother and even though he is still nursing, the men caught him and took him away and are now trying to sell him into slavery.

The slaughter of 20,000 dolphins, porpoises, and small whales occurs in Japan each year. Starting on September 1st and usually continuing through March of the next year, fishermen herd whole families of small cetaceans into a shallow bays and mercilessly stab and drown them to death.

This annual slaughter of dolphins was virtually unknown until 2003 when Sea Shepherd globally released covertly-obtained film and photographs of the now infamous bloody “Cove” in a village called Taiji. Starting in 2010 and continuing to this day, Sea Shepherd has a ongoing presence of volunteers standing watch on site at the Cove. They are The Cove Guardians.

This is actually a big story…IN JAPAN.  But not the US.  I read about it in the English press.  Not one US media carried it so far as I can detect.  The NYT has carried stories about the dolphin hunt…in 1978!  Hardly since.  The Washington Post has never carried any story about killing dolphins of any kind and Japan isn’t the only dolphin killing nation!

Japan’s Far Right Blocks Screenings of ‘The Cove’ which is the movie about this mass slaughter/slavery event.  The Japanese claim this is a cultural thing.  Bullfighting is much older than the dolphin killing and it was recently outlawed in Spain, for example.  And it is very much a part of Spain’s culture.  The fascists in Spain celebrated this sport when they ruled Spain.  Fascists in Japan do likewise with the whale/dolphin slaughters. 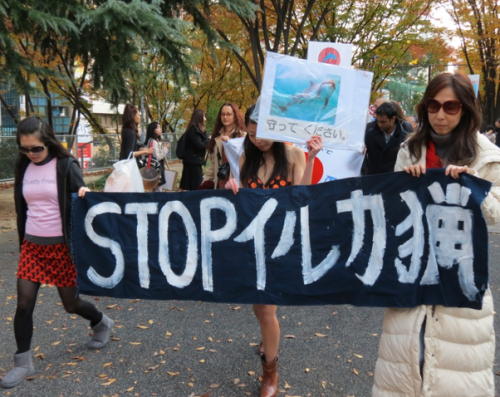 A group of about 70 activists, including a majority of about 40 Japanese activists staged a ninety-minute rally in the city this afternoon against Japan’s practice of hunting dolphins for profit and killing whales under the guise of research.It is the first time Japanese citizens have gathered in protest against this practice.

It is very brave to protest something the fascists love in Japan.  Protestors spewing hate speech and making threats against minorities and there is a large Korean citizen minority in Japan who have lived there for generations, are until recently coddled by the cops:  Anti-Korean Voices Grow in Japan thanks to the imperialist gestures by Abe and his gang.  Recently, 8 arrested as groups clash over anti-Korean demonstrations in Tokyo when anti-fascist protestors confronted these government-endorsed racists.

Fish factories around the Fukushima prefecture now have to take radiation measurements.

“We’re taking samples from every catch we make and if we ever find even the slightest trace of radiation, we’ll destroy the whole catch. So far there has been none, this fish is safe,” Akihisa Sato assured RT, a worker in a fish laboratory in Soma, Japan.

The statement about the fish being OK is a total lie.  Never has the Japanese fish mongers thrown away anything and the government not only doesn’t monitor all this, Abe actively encourages the eating of these fish and is attacking China and South Korea for their Japan fish boycotts!  Again, our media mainstays don’t mention much of any of this.  It is censored here.

And here is the bad news: Radiation at Fukushima well hits ‘record high’ so to fix this, Fukushima’s operator says spin-off an option only for the future so TEPCO and the government can claim  no responsibility for cleaning this up!!!!

In June 2013, the Diet of Japan passed a law regarding fair treatment of disabled people. The new law was a step towards something similar to the bystander laws of France, wherein if you suspected a disabled person was being abused, you have to report it to the police. This law paves the way for Japan to be a signatory to the Convention on the Rights of Persons with Disabilities, a convention more than 130 countries have already ratified.

Up until last year, the government of Japan didn’t even do statistics on disabled people in general.  Waiting until 130 countries signed these protocols is amazing.  There are only 192 nations on earth more or less depending on which countries have been split in two lately.  Still, all first world nations signed this long, long ago.  Again: no diplomatic pressure is put on Japan.  The signing of the child abduction protocols has seen Japan drag its feet, too.  And the fumbling pressure applied to sign has been useless since the US gives Japan a green light for anything it wants at this point.

Here is a HUGE insult to our diplomacy:  China’s propaganda campaign against Japan – The Washington Post by the ambassador from Japan who sees our President: by Ambassador Ichiro Fujisaki

It is important to note that China began raising this issue with political motives in 1985. At that time, more than 20 visits by prime ministers to Yasukuni had gone unchallenged, even after 14 Class A war criminals had been enshrined there in 1978…The path that postwar Japan is taking as a peaceful nation will never change. Polls show that the American people have deep trust in Japan, which is reciprocated, and that few Americans fear Japanese militarization.

My father-in-law was at the battle of Iwo Jima and Okinawa as a medic.  This is a slap in his face.  This is disgusting.  Vets are dying off fast now but they still are here!  This lying piece of garbage knows the Yasukuni Shrine has a  museum, too, that claims Japan was given China by the Gods and deserves to kill off Chinese.  As well as claims the US caused the Pearl Harbor sneak attack.

Some Americans even believe these stupid lies. Japan invaded the Republic of China in 1937, long before Pearl Harbor.  And the US was an ally of the Republic of China and protested the invasion and had the League of Nations condemn this and then this led to the boycott of Japan.  So Japan attacked the US directly.  There is an obvious cause/effect relationship here.

The US has decided Japan is to be our cat’s paw against a rising China.  China will rise because it is a modern industrial nation while the US is a declining world power that destroyed its own industrial base and basically ‘bombed’ its cities leaving many famous cities in ruins and places of social unrest and terrorism.  While China organizes and gets stronger and encouraging Japan to do insane things won’t stop China.  Or fix the US.