I noticed the other day that Abe went to Davos, Switzerland, to boast about how he fixed Japan’s economic problems via debasing the currency as much as possible thus enabling higher export profits with the US and EU.  For this devilish activity, he was applauded by the US State Department as ‘So Very Clever’.  Now, the chickens are all dropping dead in the roost as all trade currencies go plunging down, too.  The last 30 years of the US demanding that Japan and China make their currencies higher in value has collapsed as has the US stock market and other systems.

The peso suffered its steepest daily decline since the country’s devastating 2002 financial crisis, on top of falls on Thursday, after central bank gave up a battle to prop up the currency.

Having shed more than 30 per cent of its reserves last year, the central bank this week surprised traders by abandoning intervention in the foreign exchange market.
The new policy increased worries about what is already one of the world’s highest inflation rates…The Fed last month shaved $10billion off its monthly purchases of bonds to $75billion. The bank holds a policy meeting next Tuesday and Wednesday and is widely expected to make further reductions to its asset-buying.

Investors responded to the uncertainty by buying into safe-haven assets like the Japanese yen and Swiss franc, and highly rated government bonds. German Bund futures rose and 10-year US Treasury yields hit an eight-week low below 2.75 per cent.

The only reason Mexico supported the value of the peso was due to US pressure to keep the value higher.  But when the Mexicans saw Japan being rewarded for stiffing the yen, they shrugged their shoulders and joined the party!  Duh!  Here is proof of why Mexico had to devalue the peso” 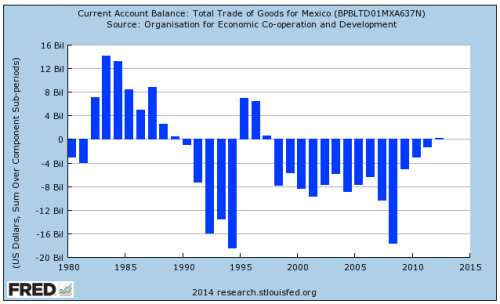 Back when NAFTA passed Clinton and the GOP Congress (do note there is this long thread of bipartisan back stabbing at work all the time!!!!) and became law, the US ran a huge trade surplus briefly with Mexico which then learned from the Japanese how to play the currency game.  And note that virtually always since then, Mexico has been on top and the US has bled red ink.

This graph shows the flood of red ink in the US trade statistics.  The US Wall Street gang benefits from trade deficits but the destruction this is causing our nation does affect many systems from taxes, loss of tariff funding…a critical thing that used to keep our government solvent, by the way…and the real loss of US sovereignty and power worldwide.  Even as globalists running the US into the ground whine about our loss of power, they work insidiously to destroy our economic system via free trade.

Not only does the US allow Japan to run constant trade surpluses with us, we let Japan lead us into WWIII with China and Russia even though this will destroy our nation and possibly most of us humans living on this continent.  So, the U.S. Pacific forces chief concerned over Japan-China tension and wants more diplomacy, not lunacy.

Meanwhile, a gleeful Abe sees World War I echoes in Japan-China tensions and proof of his manhood,  Abe also defends dolphin hunting as this necessary he-man activity along with the necessity of hunting whales in nature preserves offshore of Antarctica.

And now on to Egypt: Collapsing colossus | Opinion , Editorial | THE DAILY STAR

Certainly, all the ingredients for widespread violence are there: extremely high levels of poverty and unemployment, a lack of education, and a hangover from decades of an often cruel and oppressive military dictatorship. The population has grown enormously over the last 50 years, but without the needed economic, urban and social planning.

The Egyptian people have this history of not supporting dictators who work for Israel and Saudi Arabia so we have bombs blowing up things and riots and just like say, Syria or Ukraine where Kerry and his bloody band of bankrupt brothers yap about the need to heed demonstrators and stop violence by having military dictators resign…or in the case of Ukraine or Egypt, elected governments are to be violently overthrown by mobs so this can be fixed via military intervention and imposition of martial law and the dismemberment of the nation into ethnic enclaves!

The tinier, the better.  But none of this fixes our trade deficit which I say is our #1 problem, it is the predictor of what will happen in the future, namely, bankruptcy.

Oh, and gold is rising again due to currency devaluations!  Happy days for gold bugs.  Still doesn’t fix the trade deficit.  One can hold onto a fist full of gold and still see everything be destroyed if one’s nation is bankrupt and has a zillion enemies especially due to religious warfare waged against a billion believers of one sort or another.

PS: My husband is happy to hear all the kind words here from readers!  THANK YOU.  We diagnosed his problem: Orthostatic Intolerance, a rare disorder caused by chemical poisoning which leads his brain stem to think there is a heart attack when there isn’t one, for example.  That is, these are phantom heart attacks.  The ‘reptilian’ part of our brains runs the heart, circulatory system in general, digestion and fight/flight/sex stuff.  The basics.

Chris is still in the hospital and I couldn’t visit him today due to a near-zero temperature blizzard.  Ah, global warming is fun, no?  Anyways, this is one of the bitterer winters we have had since 1976.  And it was quite Arctic back then!