Something is happening in the Pacific Ocean: the cold water La Nina portion is actually colder, not warmer.  Climatologists are predicting an el Nino event but I think history says otherwise.  There are many mega trends going on that are an interaction of human behavior, the sun’s shifting output of energy, volcanic activity or inactivity, earthquakes in the ocean’s floor such as the three 9.0+ quakes off of Japan, Chile and Indonesia and salinity of the oceans going through various cycles where salt content increases or falls.  All of this creates difficult to interpret weather conditions which cause local shifts that seem quite large close up but when viewed through the lens of history, are actually rather common.

Droughts in California, for example, are the norm.  This state faces the Pacific Ocean in in such a way, it is victim of constant decadal  oscillations whereas Brazil’s climate is protected from the la Nina/el Nino oscillations by the Andes.  So California sees an amplification of the el Nino/la Nina forces whereas Brazil has virtually no effects.  Here is a trend graph showing how la Nina is a very strong decadal force and how the present cold phase is doomed to continue for another 8 years, minimum: 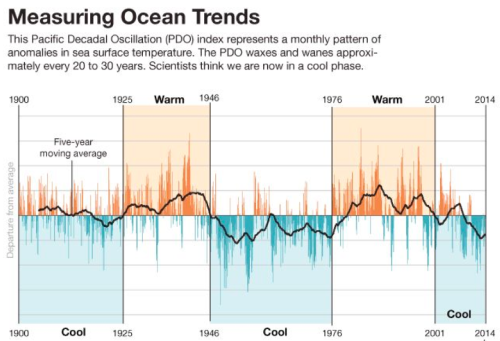 There is no evading this.  The years of major global warming fears was during the warm phase.  Now, it is a cool phase with a chorus of climatologists telling us their computer models show global warming when the Pacific is showing oceanic cooling.  The global warming belief system has been conned into this game of CO2 swap derivative contracts now being heavily, VERY heavily used by the very rich to evade taxes and produce nothing, they are trading the right to pollute!

And CO2 levels rose during all this which the super rich blamed the Chinese only that isn’t what is going on.  Since the CO2 derivative market does zero to fix CO2 pollution and builds no alternative energy systems for individual home owners but rather imposes taxes on them all, it does nothing about why CO2 is rising in the first place which is DEFORESTATION of the tropical equatorial regions.

Here is a study I can’t access but can explain anyways:  Weak Northern and Strong Tropical Land Carbon Uptake from Vertical Profiles of Atmospheric CO 2 Britton B. Stephens, et al. Science 316, 1732 (2007): Ahem: the  northern forests have this thing called ‘winter’ which is very much still very real, no, it isn’t summer all winter.  It is super cold winter all winter again as the decadal cooling cycle gets a firm grip on the climate.

So the trees don’t grow and the CO2 isn’t eaten and turned into wood.  Meanwhile, population explosions in the equatorial regions is causing massive, very destructive deforestation.  And the planting of handfuls of tiny saplings in these fraud CO2 exchange programs is beyond useless, it is cynical.  The clowns who got stuck in the Antarctic and used tons of CO2 to haul out again claimed they were still saints in the Church of the War on Warm due to planting some saplings somewhere else on earth.

Here is something from a pro-fossil fuel group which is true even if they are biased:  The Regional Greenhouse Gas Initiative

This decline in carbon absorption (by rain forests) is due primarily to unsustainable forest practices and land use changes.

And all that is certainly true.  CO2 levels in northern regions increase at night and decrease during the days because trees only eat the CO2 when they get access to sunlight.  When, for example, we have volcanic eruptions, the level of sunlight drops and trees eat less CO2.  When it is very cold and cloudy and lots of snow, trees hibernate just like squirrels or bears. This is an ice age adaptation.

So the planet’s oxygen supply depends a lot on tropical forests which don’t have a season of short or nearly no sun nor any winters.  And where are the forests vanishing?  Deforestation up by one-third in past year in Brazil due to changes in laws protecting the rain forest there.  Indonesia’s rate of deforestation has doubled under the moratorium which is what happens when both Brazil and Indonesia have out of control populations that grow super fast, sun or moon.

The laws both passed to protect the forests were demanded by Western powers but no one enforces these laws and in Brazil, the growing population demanding farmland pushed the government into cutting down the Amazon.  So there really isn’t any program to protect it at all, for the most part.

Back in the 1800’s, where I live was virtually no forests because the immigrants from Europe starting in 1600, cut it all down.  Only on the highest mountains, did trees escape the relentless hunt for wood.  Today, it is heavily forested thanks to fossil fuels.

But in Indonesia and Brazil, they need Biofuel>

1. Biofuel is a lie because the production of biofuels causes vast amounts of carbon dioxide to be released into the atmosphere – from the burning and clearing of land for biofuel crops, and from the fuel burned by the agricultural equiment in planting and cultivating the biofuel. (This is in addition to the carbon dioxide that is released when the biofuel is burned in number 5 below).

4. Biofuel is a lie because virgin tropical rainforest is burned to make more land available to grow biofuel plants such as sugar cane and oil palm. The burning of the rain forest destroys a complex and valuable ecosystem, displaces and destroys native human cultures, and releases -the already mentioned- enormous volumes of carbon dioxide and ash into the atmosphere.

5. Biofuel is a lie because it produces carbon dioxide when it burns, in exactly the same way that the other carbon-based fuels produce carbon dioxide when they burn. However, it is also true that the biofuel plants remove an equal amount of carbon dioxide from the atmosphere – so in the long term, this last point is not a valid objection.

The main problem is, biofuels are being grown where there is either cheap labor or lots of fertilizer.  Fertilizer‘s main ingredient is extracted from the atmosphere, nitrogen.  Plants extract nitrogen from the atmosphere and fix it back into the soil via their roots.  Plants do this passively but humans extract and use nitrogen using…you guess right…ENERGY.

The US and China are the biggest users of fertilizer created this way.  This causes soil acidification which travels down stream to the oceans…and this is what we call a vicious cycle.  I am not a ‘denialist’ who believes humans have no effect on the environment, that is just insane.

But I also think humans don’t control the sun, hardly!  And that this has a huge effect just as earthquakes and volcanoes.  I am aware there are people who think humans DO control these forces but again, that is also silly.  Nature has its powers which are awesome and stupendous and we better respect this fact.  When we were hunters only, we drove species into annihilation when the climate shifted from Ice Age to Interglacial.

We also changed things very much with the invention of agriculture because humans couldn’t exist anymore as meat eating hunter/gatherers, the growing of food, a tedious process, did bring stability to the family and created vast wealth via capturing the rain and sunlight to turn these into crops that can be stored easily and consumed during droughts or cold spells.

For the interglacial we are still in has lots of both.  Ever since the birth of agriculture.  Which makes these happen more often.  And fixing this is impossible if we want to live on this planet and multiply to infinity.  There is an upper limit to human habitation.  Which the far right wing refuses to understand.  Instead, like the Jews in Israel, they want ethnic cleansing and warfare so they can deny food, water and land to other tribal groups.

All over Africa, tribal warfare rages as the population booms.  Ditto, the Middle East.  California has had a century long population boom and the climate is going bust there because there is no way that place can support 50 million people, for example.  And the Northeast is emptying out due to the cold winters being so miserable.