Germans Pretend To Hate Putin To Please US Warmongers, UK Also Pretends While Planning To Not Fight Or Boycott

Americans are being told that the Crimea crisis is terrible and huge and gigantic and we are leading the ‘free world’ in fighting Putin.  Nothing could be further from the truth.  After reading a number of papers from Europe, it is obvious that no one in the EU top nations wants to wrestle with Putin.  At all.  They are happy to say propaganda things to keep the US happy but actions?  Nein!  Nichts!  Nothing.  The Der Spiegel English Online magazine, for example, has tons of propaganda for US readers.  It features a fake story about how Germany must play a ‘central role’.  But then look at the GERMAN edition auf deutsch: 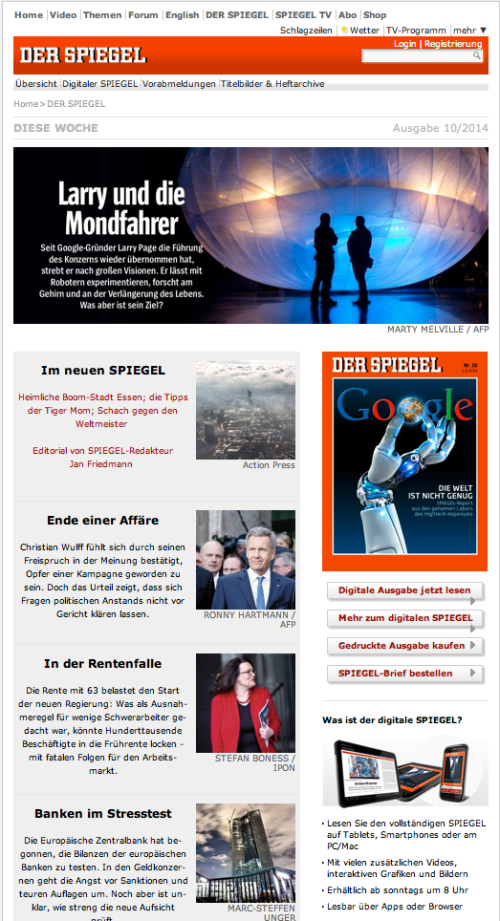 Nothing!  HAHAHA.  End of the investigation of the love affair of Wulff, a political leader.  Tiger Mom tips on raising brats.  Google’s space plans for expanding the internet.  German labor news.  The European Central bank is now testing all the banks to see if they are solvent.  I notice that al Jazeera’s new American news is totally different from their International news.  So I read the US one only to see how delusional we are kept and then read the real news which is for the rest of the world.

Putin Can’t Stop – NYTimes.com is the noxious Zionist, David Brooks who has bellowed for many, many illegal wars, invasive actions, bombings of people, attacks on tribes, stealing land, threatening nations that aren’t threatening us (Iran being one of these), bloviating about how Putin is ‘insane’ and the Russians are stupid to be ‘nationalists’.  All coming from a top Bilderberg member!  Who, along with an army of Bilderbergers, spent the last year screaming about how the US is ‘exceptional’ and therefore, has a unilateral right to attack anyone, any time.

The US also has encouraged unilateral seizures of land with Japan and Israel.  Israel, in response to public requests to cease building on the West Bank, increased it this year by 150%, for example, Netanyahu is here today telling Congress and the President they must back more land grabs and crush the Palestinians forever so Jews can steal even more stuff from them.

Germany, which runs a trade surplus with the US, is gingerly trying to placate insane, megalomaniacs here so she told Obama, SUPPOSEDLY (remember, Zionists are reporting this from some unnamed person who probably doesn’t exist!) that Putin is out of touch with reality.  No one is more in touch than Merkel and she knows that 40% of Germany’s energy mainly used to run industries, comes from Russia and can cease immediately causing Germany to collapse.

And this is what the rulers of the US want!  The Zionists hate Germany a lot so they find this easy to demand.  But Germany, I assure everyone, won’t boycott Russia.  Nor will other allies:  Files show Britain will NOT support military action against Russia | Mail Online: seems that while Cameron was yelling about punishing Russia, there was some paperwork on his desk that said England will not boycott Russia and above all, will not stop Russians from parking money in London!  HAHAHA.

I can read upside down and backwards and this skill has been useful in the past when talking with important people while reading stuff on their desks which they assume, I can’t read.

Hague and Cameron will also not send in any troops.  This didn’t stop them from ritualistically saying they will ‘get tough’.  This was misdirection to fool Americans. All of Europe is hoping the US would destroy our economy, bail out Ukraine ourselves and kill our citizens fighting a battle not one EU leader wants.  This, of course, will destroy our empire further since we are going bankrupt.  I believe at least half of Congress says we are going bankrupt and need austerity to save us from this fate, no?

Reading comments overseas of readers, we see immediately that no one wants sanctions nor war.  Here in the US, the majority don’t want this, either.  The slew of anti-Russia propaganda spewed out during the Olympics triggered Pavlovian drooling in the US but when the suggestion is made for us to fight another war, immediately cold feet happens.

President Obama’s foreign policy is based on fantasy – The Washington Post: This is from the editorial board and Bezos, owner of Amazon.com.  Bezos says he doesn’t want boots on the ground, merely a projection of US power somehow in very distant lands like Afghanistan where it has just recently suffered a resounding, total defeat.  Bezos also claims that Russia is playing with 19th century rules whatever that means.  I suppose it means normal diplomacy/war making which has been true since around 6,000 BC.

The US has spent all our capital playing imperial overlord.  Our tool?  Give rival nations including dangerous imperial rivals like England, Germany and Japan, trade deals which destroy our home industries and makes us all poorer.  We did this with modern, overt rivals such as China.  And we started our trade deficit game by allowing Israel to run trade deficits while getting money for this  as ‘aid’ too.  This wholesale looting of our sovereign wealth has made the US the world’s poorest nation.  That is, we have negative wealth, that is, debts owed to everyone especially over $2.5 trillion we owe to Russia and China and another trillion we owe Japan.

As Russia fires its first shots in Crimea as soldiers warn off Ukrainian troops advancing on occupied airfield to demand their jobs back, Bezos is using the WP to demand action:  Condemnation isn’t enough for Russian actions in Crimea – The Washington Post.  The Bilderberg gang is desperate to force Russia to obey the EU/US diktat of 1994 which was signed by a weak, drunk Yeltsin.  This is insane.  Any country forced to divest like that due to internal collapse does not have to obey foreign power demands made of a fatally weak leader!  History is crystal clear about this!  Screaming about how evil it is to dismember Ukraine is also insane since the US is a huge sponsor of dismembering nations.

People have disputed this with me, saying that it was GOOD that Yugoslavia was torn apart, note how happy everyone is (NOT!).  Actually, tensions in the shattered mini-nations is rising and fighting is rising and the fury of hate caused by tribalism is toxic but then, the US has dismembered Palestine which actually began with the UK handing the natives to the Zionists who then did their ethnic cleansing.

Obama and Cameron are venting their fury in the Olympic Tea cup.  That is, they are forbidding disabled athletes travel plans to Sochi.  I predicted that some part of the Olympics would be boycotted because the US and UK do this EVERY TIME.  Without fail.  If Russia is the host.  Some excuse would be pulled out the ass.  Since NATO attacks nation after nation all the time, if Russia boycotted Olympics in NATO nations, there would be no Russians at all, ever.  So using invasions as an excuse is silly.

The West hopes that Russia will accept being slapped around and won’t retaliate and will continue to sell gas, oil and do banking with the West.  But Russia just might decide to tighten the cork screws.  Already, Western stock markets are plunging and oil prices are climbing.  And this will make the depression worse and worse in Europe and the US public will be screaming soon, too, as prices at the pumps and heating homes shoot upwards.

This is because if prices in one part of the world rise, it rises everywhere so even if we are pumping our own oil, the oil and gas companies can raise prices to world levels with impunity and they do this gleefully.

25 responses to “Germans Pretend To Hate Putin To Please US Warmongers, UK Also Pretends While Planning To Not Fight Or Boycott”