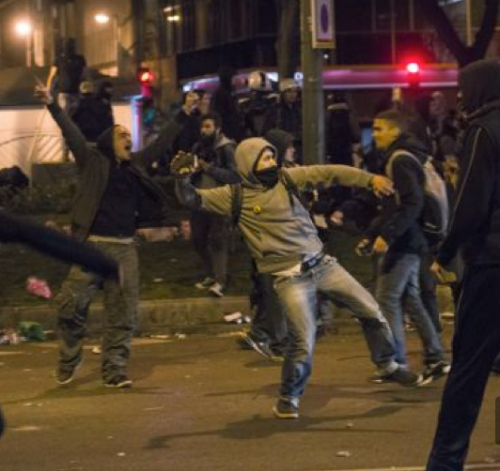 Test question: Is the above picture showing riots in Ukraine to overthrow the elected President there?  Answer: Nope.  It is Spain.  Spanish riot police arrest 12 in clashes with anti-austerity protesters | World news | theguardian.com. March for Dignity: Spain has ‘had enough’, say 2.5 million protesters.  The government there is imposing IMF rules on the population and is very unpopular and the people there will be militarily suppressed with the EU and US cheering this.

As the European nations undergoing severe reduction in jobs and social service erupt in rage, the EU has plenty of money to give to the new unelected ruler of Ukraine, but bailing out elected governments in the EU is only undertaken if the people are punished for previous election choices.  Due to feeling rather suicidal, the EU Puts Brakes on Russia Natural Gas Pipelines – according to the WSJ.com which approves of this.

Poll: 69 percent see Russia as threat to US | TheHill exactly like before the insane, stupid invasion of Iraq.  A ton of propaganda goes a long, long ways and the US public never figures out how we are driven into wars that are totally destructive this way.  Led by the nose, people don’t understand why it is OK to have uprisings in Syria and Ukraine but NOT in the ones in Spain, Greece or say, France and even the English one that flared up two years ago and threatens to flare up again as the economic guillotine falls on everyone’s necks.

Japan ready to roll out more stimulus to cushion sales tax hike because the tax hikes are very retro.  They hit the poor the hardest.  Sales taxes hammer the lower classes into the ground.  Already, over a third of the workforce is part time due to reduction of jobs. Abe promised higher wages with the ‘inflation’ the Bank of Japan is causing via money printing.  But instead, wages continue to fall and jobs continue to be eliminated.

Here is another country that has an Ukraine-type uprising:  Photo Gallery: Erdogan Losing His Grip – SPIEGEL ONLINE – International

The US wants to keep him or if getting rid of him, replace him with an oligarch or banker.

Venezuela News, Protests and Riots Update: Two More Dead As Congresswoman Appeals to US Officials and OAS for Help: see?  Venezuela is ripe for the picking!  The Congresswoman wants foreign invaders to come in and replace the government.  The US will happily do this except this means Crimea had a perfect right to beg Russia to save them!  This is a delicate operation because the US has a double standard that is quite dear.

Machado, the lady asking for foreign powers to have a coup, has been denounced as a traitor and is being kicked out of the Parliament in Venezuela.

Jerusalem holy site visit sparks riots – far right wing fascists in Israel have marched into Muslim mosques to demand the right to be everywhere all the time.  Obviously, no Muslims are allowed to do this to Jewish houses of worship.

Last is this story:  Global riot epidemic due to demise of cheap fossil fuels.  The liberal fix for this is to…TAX FOSSIL FUELS!  Yes, running concurrent with the global warming terror is the fix which is to price energy from fossil fuels so high, the poor and lower classes can’t afford it anymore.  Thinking that they will then put solar panels on the roof and ride bikes while the rich and middle class tool around in fast or huge vehicles, flying in jets to go on vacation, and live in huge palatial houses, this is insane.

We will have a very hot ‘globe’ as several billion people riot.