Time To Look At Japan Trade Statistics: Japan Is In Same Trap We Are In

Japan’s trade statistics are terrible, Japan is now wallowing in red in both government spending and trade just like the US.  The above graph’s red parts are energy trade deficits while the blue represents Japan’s imports from industrial nations, mostly China and the EU.  Japan cannot run on red ink forever and Fukushima is a huge budget hole that is destroying a large sector of Japan and menaces the entire population with future cancer rates going very high.  Japan’s economic problems perfectly mirror the US only with the added population decline problem making problems in the future.

BREAKING NEWS:  China seizes Mitsui O.S.K. ship over unpaid wartime contract compensation while one day after yet another LDP official visited the war criminal shrine, Abe sends offering to Yasukuni shrine, but has no plans to visit: the warmongering will increase.  While Japan runs a HUGE trade deficit with China.

Much of the news I have read recently blames Japan’s trade deficit on Fukushima and the need to import coal and oil.  But the actual Bank of Japan statistics tell a much more complex story.  Yes, the majority of the trade deficit is from energy imports but the fact that nearly all EU nations have a trade surplus with Japan where the population loves imported EU high status goods like expensive purses and shoes as well as cars, etc.  This is deep penetration of Japanese markets that hurt Japan directly.

And looking at the fewer and fewer countries that have trade deficits with Japan and the US is the #1 victim, we see trade is DECLINING.  Only a few places see increase in trade.  This is particularly troubling for the Japanese government.  Even the US trade is falling, though only by 9% right now. 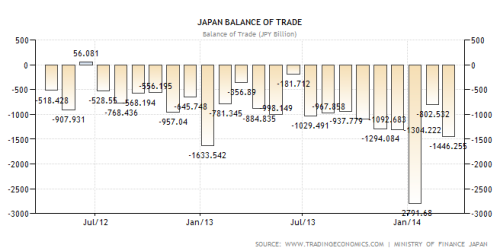 The US is in the  usual trade negotiations with Japan with them trying desperately to hang onto the neck of the US and drown us.  We are their only hope!  So not one inch will be handed over to US trade negotiators who have a long record of stupid, worthless negotiations that only make our trade deficit worse and worse.

The one thing stopping our deficit from growing to infinity is our bigger and bigger recessions.  Which the Fed Reserve and DC governments all claim they want to avoid and erase!  Instead, all our policies lead towards endless trade deficits, hidden inflation, bubbles and banking collapses.  And government overspending and a refusal to pay taxes or grazing fees or whatever.

The Bank of Japan’s massive purchases of government debt hit a milestone this week, sucking liquidity out of the market to such an extent that the benchmark 10-year bond went untraded for more than a day, the first time in 13 years.

Data from the BoJ late on Monday showed its holding of Japanese government bonds topped ¥200tn ($1.96tn), or about 20% of outstanding issuance – up by more than half from ¥125tn about a year ago.

The fall in market liquidity looks set to intensify as the BoJ has vowed to continue its aggressive buying for at least another year, with market players expecting it to expand its easing some time later this year.

We see from the statistics above that Japan is importing a lot of energy products from Australia and the Middle East as well as…Russia!  The desperate attempts at controlling global energy markets is an underlying force at work in the way the world is spiraling into another World War.  Japan was willing to do a sneak attack on the US and Netherlands and Britain (lest we forget, Pearl Harbor was one of MANY targets that morning with the attack on Burma and Singapore, etc. happening too!) over the desire to control oil markets so the Japanese empire could press forwards in China.

Now the US and Japan are the energy dependent nations and to my surprise, Germany has decided to go full bore ‘let’s attack Russia again!’ which is pure insanity but then, they do run a huge trade deficit with Russia!  NATO salivates at invading Russia mainly via overthrowing the government and having a Yeltsin-style weak leader let the looting run riot.

While the Fed’s decision to inundate the U.S. economy with more than $3 trillion of cheap money since 2008 by buying Treasuries and mortgaged-backed bonds bolstered profits as all fixed-income assets rallied, yields are now so low that banks are struggling to make money trading government bonds.

Yields on 10-year notes have remained below 3 percent since January, data compiled by Bloomberg show. In two decades before the credit crisis, average yields topped 6 percent.

Average daily trading has also dropped to $551.3 billion in March from an average $570.2 billion in 2007, even as the outstanding amount of Treasuries has more than doubled since the financial crisis, according data from the Securities Industry and Financial Markets Association.

Question:  So, the first quantitative easing in November 2008 was warranted?
Answer:  Absolutely.

Question:  But they should have stopped these kinds of policies long ago?
Answer:  Yes. But here’s the problem. When you talk about crisis resolution, it’s about attacking the fundamental problems that got you into the trouble in the first place. And the fundamental problem we are still facing is excessive debt. Not excessive public debt, mind you, but excessive debt in the private and public sectors. To resolve that, you need restructurings and write-offs. That’s government policy, not central bank policy. Central banks can’t rescue insolvent institutions. All around the western world, and I include Japan, governments have resolutely failed to see that they bear the responsibility to deal with the underlying problems. With the ultraloose monetary policy, governments have no incentive to act. But if we don’t deal with this now, we will be in worse shape than before.
Question:  Which of the major central banks runs the highest risk of something going seriously wrong?But wouldn’t large-scale debt write-offs hurt the banking sector again?

Answer:  Absolutely. But you see, we have a lot of zombie companies and banks out there. That’s a particular worry in Europe, where the banking sector is just a continuous story of denial, denial and denial. With interest rates so low, banks just keep evergreening everything, pretending all the money is still there….

At the moment what I am most worried about is Japan. I know there is an expression that the Japanese bond market is called the widowmaker. People have bet against it and lost money. The reason I worry now is that they are much further down the line even than the Americans. What is Abenomics really? As far as I see it, they print the money and tell people that there will be high inflation. But I don’t think it will work. The Japanese consumer will say prices are going up, but my wages won’t.

ZERO private bank bids for Japanese government debt this last week!  Japan bond market liquidity dries up as BOJ holding hits 200 trln yen.  A lot of the Japanese government money is flowing into remilitarizing Japan, seizing distant islands offshore nuclear armed China, playing the ‘Asian pivot’ game with an equally bankrupt ZIRP banking US government and paying for over a quarter of the population which is elderly and which will be 50% of the population in just another 20 years.

So what are they doing?  Lawmakers demand gov’t ‘redesign’ whaling program!  Diet members dine on whale meat in defiance of ICJ ruling even though most of them probably threw up afterwards.  And the only ones who want to eat whale meat are the elderly.  Money for rebuilding from Fukushima and the tsunami went into whale hunting.  Japan intends to continue Antarctic whale hunt: Sea Shepherd:  This, in turn, keeps the Sea Shepherd crew employed, too.  So I assume they are going to have fun with this news.

As we see from this graph, output has shot upwards while employment in factories drop.  Robots don’t buy goods.  Manufacturers do sell robot materials with each other but this doesn’t feed the economic loop like employment does.  The gap here is fixed by exporting goods and this is a game both the US and Japan are increasingly losing.  And Japan can’t cannibalize the US forever if our employment continues to collapse like we see here.

15 responses to “Time To Look At Japan Trade Statistics: Japan Is In Same Trap We Are In”