The earth has been quite active since the huge Boxing Day Quake offshore Indonesia and then the Great Tohoku quake in Japan.  Huge quakes have shaken Chile and New Zealand and I noticed all this last several months that the spreading ridges in the Atlantic Ocean and Antarctica are also quite active.  Now we had another fair sized quake offshore Vancouver Island.

Even more troubling is the increasing activity of some of the local volcanoes in Cascadia:  Volcanoes | Pacific Northwest Seismic Network

juan_de_Fuca is a subduction zone.  It is also a hot spot.  It could also be releasing gases that are causing some of the problems for ocean life forms which are already disturbed by Fukushima pollution problems. 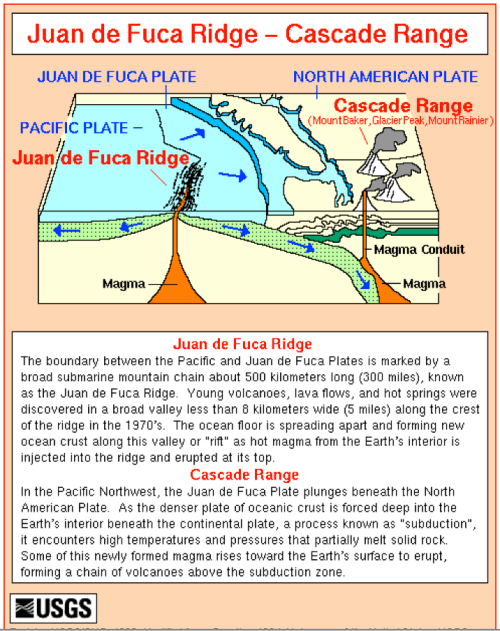 The #1 volcano to watch now is Mount Rainier.  And it is shaking this last week.  Most pre-volcanic eruptions have small quakes, not great ones.  So this bears watching closely because if this volcano blows, it will melt all the glaciers on top and these will form violent lahars that will have a huge amount of boulders, rocks, trees, buildings and water and will wipe out all the towns and parts of Tacoma, Washington and perhaps damage Seattle itself.

Not to mention deposit a huge amount of ash all over the land to the east of the volcano.

The entire Pacific Northwest is having small but troubling earthquakes this week.  I have noticed over the course of the last year, that more and more higher activity earthquakes have been shaking not only the entire West Coast but even further in the interior especially in Oklahoma.