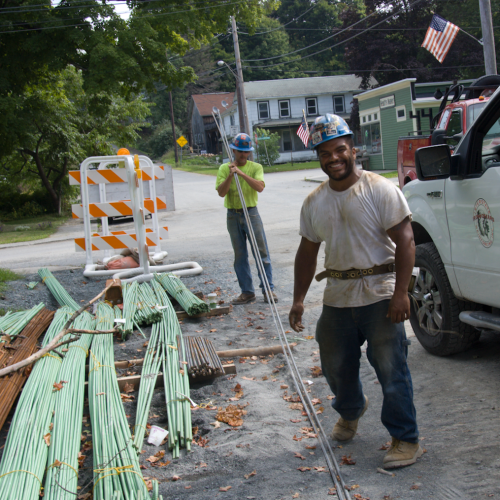 Here is a fine example of the working class in my neighborhood.  Note the American flags in the helmet of the black steel worker, most of his coworkers also had these flags.  Also on the bridge they are building is the sign put up protesting NY gun laws.  These draconian laws were passed to stop the shootings in the cities but the shooters in the cities use illegal hand guns.  There is high feelings against the gun laws while at the same time, DiBlasio decided it was racist to search for guns hidden on black thugs so no one is stopped for gun searches anymore with the obvious painful results. 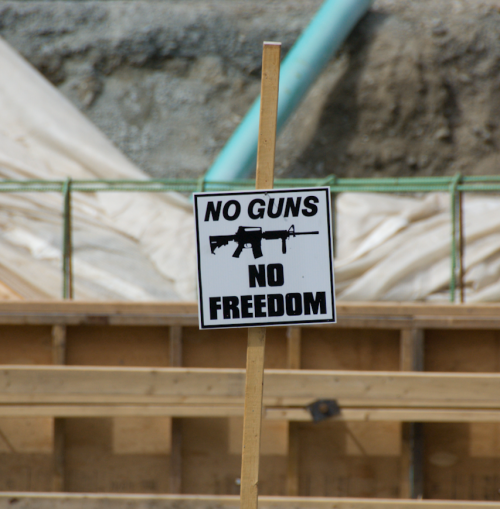 The NYT doesn’t mention any of this but here is a story today about DiBlasio and his change in neighborhoods, he moved from a white enclave to a white enclave…surrounded by crime waves:  A Tale of de Blasio’s Neighborhoods: Park Slope and Yorkville – NYTimes.com

Because of stupid changes to police practices, the NYPD stop-and-frisks drop 99% in Brooklyn, while shootings in NYC keep climbing as other serious crimes fall, according to latest NYPD data which is meaningless, the are fewer crimes being processed because the cops are basically on strike.  The row over the man who was chocked to death is also why the cops are ‘on strike’.  They feel, correctly, that they are being blamed for the social disorders they have to deal with so they are basically going to withdraw and let the citizens deal with chaos alone.

Below is this month’s gun shootings sprees in Brooklyn, NY Crime Map – Showing Crimes in Brooklyn thanks to the end of the frisk actions:  Looks like Chicago and it is the same sort of thugs doing it, the same race, the same excuses. 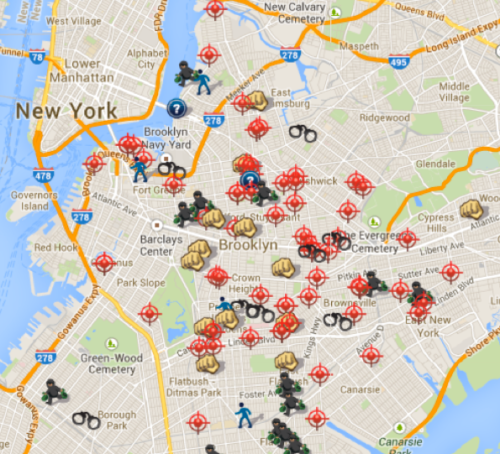 I lived in the 78th Precinct in Brooklyn two blocks from the Precinct headquarters.  I was on the committee that worked with the cops and held the record, bar none, of active citizen’s arrests including taking down, with a broom, an armed hold up man who fought fiercely with me while I had him in a choke hold.  I won, he lost.  This was back when the mayors, to keep peace with the liberals, let criminals run riot and I began forcing the police to stop passive patrols and be more active.

Crimes in the 78th Precinct dropped like a rock after hard efforts on my part and other heroic citizens who stood up to the criminals.  When we first began openly working to get higher police participation, the gangs came to us with threats, we better back off or they would kill us.  One of our committee members nearly was assassinated when one of the gangs tried to shoot him in his living room but he bent down to pet his dog and dodged the bullet.

I had bullet proof windows on my lower parts of the brownstone because of this.  When we won our war with the gangs and mayhem nut cases, Park Slope took off like a rocket and is now mostly upperclass whites…who are liberals and who hate the cops and the cops don’t like them, the cops being working class stiffs.  The rich want services and deference and want the cops to treat vicious criminals like the Gentle Giant of Ferguson, with kid gloves which is a total failure, trust me on this, few ever gave up to me when I arrested them except after I used force, sometimes harsh force.

Below is an example of why cops can’t be all that nice all the time: 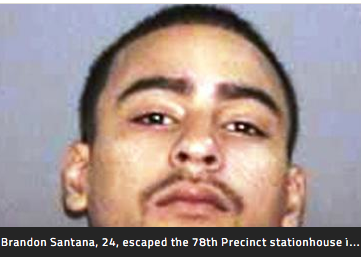 Last year, a Murder Suspect Escapes From 78th Precinct in Brooklyn, NYPD Says –later that month in January,  Escaped murder suspect Brandon Santana arrested after he escaped to the Bronx …he jumped out of the bathroom window after begging the cops to give him a chance.  And he took it.

Back in liberal Park Slope, Eyes on the Street: DOT Replaces PPW Bike Lane With Parking | Streetsblog New York City  Neighbors for Better Bike Lanes are doing the right thing asking for better bike conditions. I biked all over Park Slope and downtown Brooklyn and I love bike lanes and paths!  Fought hard for these.  But…

Deputy Inspector Michael Ameri ordered officers on May 5 to park parallel to the curb instead of perpendicularly — a practice among city precincts called “combat parking” — along a section of Sixth Ave. near Dean Street.

The change — which reduced the number of vehicles parked near Dean Street from 10 to five — has freed up space along Sixth Ave., officials confirmed.

I know the cops are pissed about this.  So they will be even slower to respond to people calling for help.  And they won’t be helpful, either.  Brooklyn 78th Precinct Police – Prospect Heights – Brooklyn, NY | Yelp 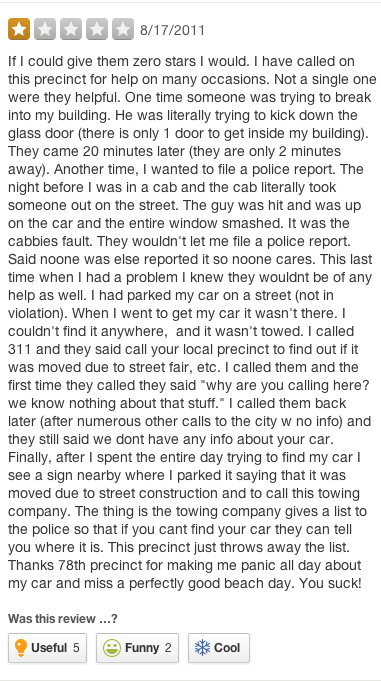 The police back when I was there were much nicer mainly because I fought hard for them and I backed them up all the time and they appreciated this.  When I got them to clean up 5th Avenue which was a burned down husk thanks to blacks rioting during the Great Black Out, they did this for me specifically because I was with them as they did it, I argued with Mayor Koch to give them the money, the extra pay, the bullet proof vests, etc. to do a very, very dangerous job flushing out gang after gang using the ruins as a stash place and crime hell hole.

Now we see liberals in full blown attack on the cops and they will respond by not patrolling Ferguson or Detroit or Chicago and now NYC which was once a safer city.

As for the gun laws, in Arizona, The fateful seconds before nine-year-old girl accidentally shot her gun instructor dead with an Uzi: Video of child losing control of submachine gun after being told to go ‘full auto’ is released by cops.  This is insane.  This is gun nuttery at work.  Giving a powerful gun to a little girl for fun is stupid.  Real stupid.  I give this ‘gun instructor’ today’s Darwin Award.