NASA ebola suits…wait!  This is a picture of how we will exist on Mars, not Africa.  Mars is colder than Antarctica and Antarctica is quite cold.  Its atmosphere is 95% CO2.  Note how hot it is!  The poles are -195 degrees but on the equator, it can heat up to 70 degrees during the day and fall to -100 degrees at night.  Much of the CO2 is sequestered in winter on Mars at the poles.  Yesterday, the head of NASA talked about ‘climate change’ and Mars which illustrates how out of touch with reality, NASA has become due to the reflexive need to hook everything into ‘CO2 is evil’ storyline.

First off, our own planet it getting colder:  Antarctic Sea Ice Reaches New Record Maximum | Watts Up With That? 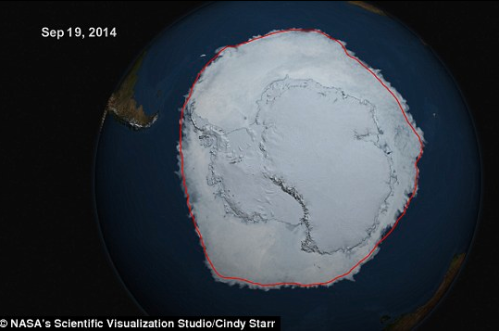 ‘Climatologists’ are stumped as to why the ice sheets on both poles are growing rapidly.  They can’t figure out how global warming is making it colder.  Or rather, their incessant need to jigger temperature data has caused them to reflexively change reality to their beloved global warming model and so they cannot see how it is getting colder even though all the incoming information clearly shows this.

So on to the insane speech by the head of NASA, an organization going rapidly crazy and my dad was one of the founders of NASA so this rather pisses me off.  I grew up in NASA’s shadow, after all. Getting to Mars will ensure the survival of our species, says Nasa chief – and he claims humanity needs to ‘get a grip’ when it comes to climate change | Daily Mail Online

Mr Bolden also explained how understanding Mars – specifically how it turned from what was thought a once habitable planet to the largely inhospitable place we see now – could reveal the future of our own climate.

He discussed the very ‘real’ danger of climate change – while not offering a firm opinion on manmade global warming.

‘We have got to get a grip on climate change,’ he said.

OK: a speech about Mars turns into a rant about global warming which isn’t happening.  Note how this idiot talks now about ‘climate change’.  What happened to Mars, anyways?  I would say, it FROZE.  Yes, it is very cold there and it froze.  When the earth has ice ages, Mars has ice ages that get worse and worse over time.  Duh.  This is due to the same agent causing both, the sun.

‘Mars used to have, we think, a climate and atmosphere, everything like we have on Earth, and at some point in its life the middle of the planet got turned off, and it lost its magnetic field and everything else,’ he said.

‘It lost the magnetic field that protected it like our magnetosphere protects us, and then solar winds and other radiation scraped off Mars’ atmosphere.’

‘That’s what Maven will help us understand. What’s left, what’s bubbling off the planet, is oxygen still on the soil, or are there the kinds of atmospheric gases we see on Earth?

Venus has an atmosphere that is also 95% CO2.  In other ways, Venus is the opposite of Mars.  It turns tremendously slowly, it has a very thick atmosphere.  It is  much closer to the sun.  On the other hand, like Mars, Venus doesn’t have a magnetic field.  Why do our neighboring planets not have this?

Why do both planets have nearly only CO2 atmospheres and one if terrifically cold and the other terrifically hot?  Then there is this curious fact:  Atmosphere of Venus – Wikipedia, the free encyclopedia

The cloud cover is such that very little sunlight can penetrate down to the surface, and the light level is only around 5,000–10,000 lux with a visibility of three kilometres. At this level little to no solar energy could conceivably be collected by a probe. Humidity at this level is less than 0.1%.[36] In fact, due to the thick, highly reflective cloud cover the total solar energy received by the planet is less than that of the Earth.

One of the big debates between ‘denialists’ who think global warmists are misunderstanding science and ‘climate change’ people is the fact that the computers used to show run away heating don’t include realistic data about cloud cover which reflects heat back into space, keeping the ground cooler.

We see this on cloudy days, of course.  The fact is, even when CO2 was a thousand times higher than today, there was no runaway heating on earth.  There were lots of jungles and lush growth.  And the clouds prevented Venus-type heating of the surface.  Generally speaking, over the last billion years, the earth has been getting cooler, not warmer.  During the last 2 million years, it has become much colder than normal.

The global warmists don’t understand what CO2 is on our living planet.  It is food for plants.  They grow faster when there is more CO2.  The reason extinction events happened wasn’t due to CO2 from major volcanic events like the Siberian Traps event that killed most living things, is due to the sulfuric gases which plants do NOT eat and which is a toxin for them and all other living things except for viruses.

Yes, viruses!  The ancient life form that evolved first when there was lots of sulfuric acid in the environment. Thermophile:

Viruses have been collected from very extreme environments, for example, a hot spring with a temperature of 87 to 93 °C (189 to 199 °F) and an incredibly acidic pH of 1.5 in Pozzuoli, Italy. These viruses were observed to infect cells in the laboratory.[32]

Burning hot, toxic environments is heaven to viruses.  They hate oxygen.  Oxygen is their enemy.  NASA is struggling with all sorts of irritating incoming data.  For example, it is now painfully obvious that the universe is not expanding faster and faster to infinity.  It is contracting.

All galaxies are falling towards other galaxies.  This cannot happen in an expanding universe.  Black holes are now more and more clearly seen and are not black holes at all but something else.  Presumptions about what we see blinds scientists from understanding obvious data that contradicts pet belief systems.

Astronomy in particular is ‘revolutionary’ literally, the term first was applied to study of the planets 300 years ago.  Galileo saw that the sun rotated and that the earth revolved around the sun.  Thus, the concept word ‘revolution’ became popularized.  Well, NASA has to change, fast, to catch up with incoming data and not reflexively defend obvious false presumptions.

Incidentally, Mr. Bolden praises Richard Branson, of Virgin Airlines, for taking people into space next year…to goof off!  These people madly produce CO2 while whining about it.  This foolishness has to stop.

29 responses to “NASA Chief Wants Travel To Mars, But Reflexively Whines About Climate Change During Speech”