As Planet Gets Much Colder, IPCC Issues Panic Report We Are Doomed To Roast

The Google news site has the usual iconic polar bears since a bunch of lazy walruses aren’t very cute, to illustrate how we are roasting to death.  Good thing they have polar bears on small ice floe photo stashes because polar bears this winter have plenty of ice to walk on as the Arctic Ocean and Siberia as well as Canada are now already locked in ice.  Periodically, there are warm surges as sun spot activity continues sporadically spraying the solar system with warmth.  So of course, due to these sputtering events, the warmists tell us it is hotter and hotter.

Above is today’s morning freeze map.  Even California is now being hit by the Arctic blasts.  Here is a list of Google’s ‘we are roasting to death’ headlines:  Invest now or face ‘irreversible’ effects of climate change, UN panel warns but never fear!  Scientists say cost of avoiding runaway climate change is low just giant taxes on energy, closing down of power plants during cold winters and other small inconveniences.

‘Leaders must act’: UN climate panel issues stark climate change warning to make these ‘small, inexpensive’ changes!  On the other hand, these same people whine, UN: Climate Change ‘Irreversible’ so why should we all freeze to death and pay high energy taxes if this changes nothing?

Above is today’s record heat waves:  Record snow in South Carolina capital in 134 years last night.  Record snowfall in Chicago – Happy Halloween! as the Arctic Vortex hits early on.  Winter storm warnings for the Appalachians and the Rocky Mountains while California has heavy rain, the drought is ended.  More importantly, Bárðarbunga volcano pumping out 35,000 tons of sulphur dioxide per DAY!

That last story is about something very nasty.  The most dangerous volcanoes are actually rift zone events.  They simply roll on and on and cough up huge amounts of CO2 and SO2 and the real killer here is SO2.  My forest loves to eat CO2 but dies if there is too much SO2. 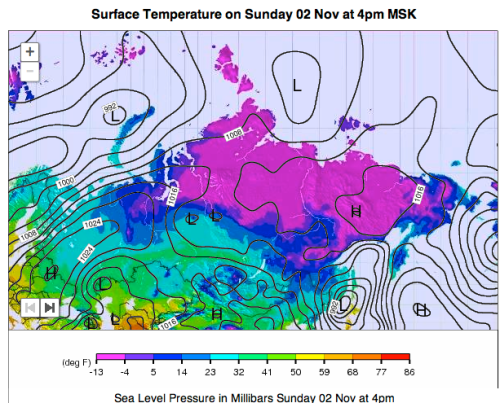 The EU is still balmy but that is going to end soon due to the fact that everything is cooling off rapidly.  Just as the Southern Hemisphere saw record ice in Antarctica, so it is now happening at the North Pole.  This is ridiculously easy to understand: energy in from the sun=warm and less energy, even if this appears to be slight=cold.

And it is getting colder, not warmer.  Heatwaves In The Southeastern US Peaked In 1939.  There are fewer and fewer people who were adults back then alive today so the collective memory grows dim.  But facts are facts and there were far, far more frequent heat waves in the 1930s than today.  By far!  Even the 1950 heat waves which I very well remember!  Are ignored by young people who were born during the icy 1970s.

We can see clearly that the cold this summer in Antarctica has cooled the oceans down greatly in the Southern Hemisphere:  Seasonal Forecast – Environment Canada 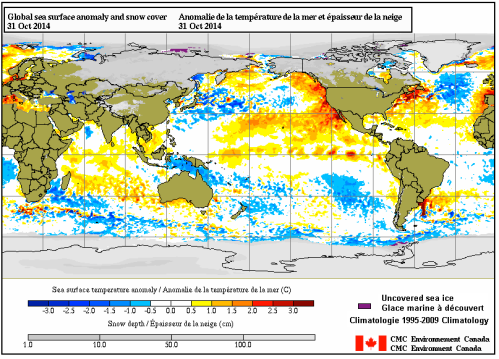 What is particularly scary is how the Antarctic sea ice is so huge while the Arctic is growing simultaneously.  No melting so far at either pole.

Peter Gleick Says  In BBC Interview That Climate Skeptics Don’t Believe We Went To The Moon except Buzz Aldrin and Dr. Schmidt both went to the moon and walked there and then came home and said it isn’t heating up due to CO2, that the sun controls temperature.

Below is a screen shot from the news from Anchorage, Alaska, talking about a deadly traffic accident due to the early onset of ice season.  Anchorage is the warmest part of Alaska and for the last several years had warmer than normal weather due to the lopsided effect of the polar vortexes. 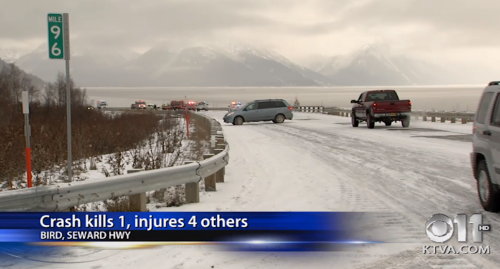 This winter shows that the polar effects will hit both the Eurasian landmass AND the North American landmass which is a sign of ice age conditions, not global warming.  I used to read ‘liberal’ comix in various media and characters like Tom Tomorrow for example, indeed, all of them are harping endlessly about how stupid we are to not believe in the global warming scam.

It is pathetic.  Every cartoon now has to insert this propaganda.  They are now desperate as it cools down.  Thinking that screaming about being warm will work, they toil away.  And so does Obama, obedient as ever to the Bilderberg gang who openly said, this was a great scam to tax the lower classes by charging them energy taxes to stop CO2.

Hard to hold that tax gun to everyone’s head while we freeze.  And this is a HUGE element in the looming defeat of liberals in Europe and the US. As already in Australia.

41 responses to “As Planet Gets Much Colder, IPCC Issues Panic Report We Are Doomed To Roast”