Nearly Entire US Has Record Cold, Lots Of Snow…US Media Ignores This News 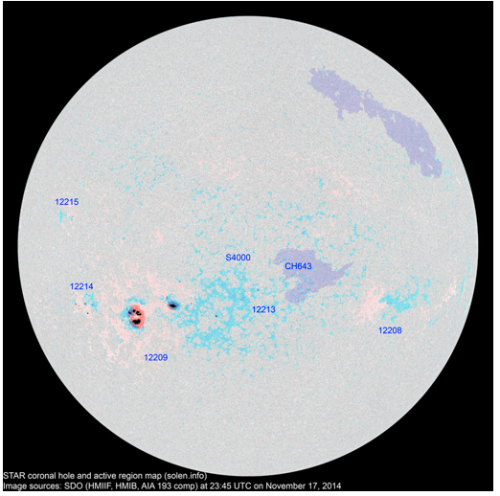 NASA’s SDO Observes Largest Sunspot of the Solar Cycle | NASA in October when the present 24th solar cycle which is very weak, had an outburst. Thanks to this active month, the sun has caused a very mild el Nino to perk up in the Pacific Ocean.  There is a lot of denialism going on about the sun and its huge effect on the climate with both the global cooling and the global warming community ignoring or pretending the sun isn’t the planet’s #1 driver of climate changes.  As we see from above, there is more sun spot activity going on.

Thanks to the solar activity picking up a tad, by the end of the week the deep freeze we see above will be much milder, briefly.  Solar Page | Watts Up With That? Overall, sun activity has been in decline for a long time.  This is why sun spots can give brief spurts of warmth to the planet so we still have fairly hot days here and there but overall, solar activity is down, not up.

We can see clearly from the graph below that sun spot activity reached its height in 1960.  It isn’t just sun spots that has an effect, there are other solar actions that raise or lower the temperature of the solar system.  In general, the more sun spots, the warmer it is on the earth and vice versa.

Now colder than during most of the past 7,000 years 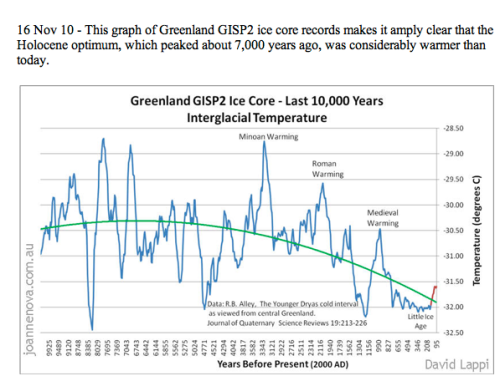 The decline into another Ice Age is obvious.  And looking out my window, I see climate, not weather.  California has weather.  Or rather, it is  a place that never ever has any real ice ages except in the far northeastern corner of the state were there are high mountains.  And no one rich lives there.  They live in Malibu and other places on the ocean’s edge.

GOP victory: Game over for the climate? – The Washington Post which is owned by a Californian billionaire, whines about global warming while DC freezes.  Sanity has finally hit Europe as Germany Plans To Withdraw From Binding 2020 Climate Targets which makes Obama’s deal with China right on target for killing our economy since Germany isn’t going to do something this insane.

Most snow cover on record for this date across the United States gets near zero coverage in our media.  Here in NY, Ski season starting early at in Adirondacks.  I wrote last year about environmentalists (sic) whining about how skiing will vanish in NY.  This was just insane. Harsh cold to break records across South again with no one noticing at the White House.

NOAA has been totally taken over by delusional warmists.  They rarely predict the climate and struggle to predict simple weather.  Step 2: Determine Vulnerabilities | U.S. Climate Resilience Toolkit is on their ‘climate’ page telling us how to protect ourselves from heat waves, oceans rising due to melting glaciers, droughts and other terrors.  Not one word about blizzards or severe cold!  Not one.  Oh, hurricanes get lots of mention but not their winter equivalent.

This deliberate and childish refusal to mention the cold infects everyone who has government positions with weather.  The Pentagon, for example, is preparing for every sort of weather thing…BUT BLIZZARDS!  The Russians, I no doubt, are laughing their heads off over this.

20 responses to “Nearly Entire US Has Record Cold, Lots Of Snow…US Media Ignores This News”