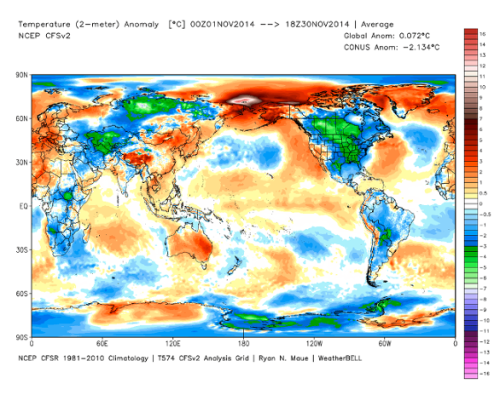 Here is NOAA’s stupid map showing how hot it is:  NOT!  Nearly all of North America, nearly 100% of South America, half of Africa, most of Eurasia is…COLD.  Very cold!  The ocean in certain places where there are nearly no thermometers is ‘hot’ except Antarctica is cold and it is going into high summer there this next month!  This is pure insanity.  Even if the Arctic is ‘warmer’ than normal, it is still freezing cold there, very cold, just maybe not quite as cold as ‘normal’ meaning 1979.  Anyways, NOAA had to announce this insane news about us roasting to death even though nearly all the continents are way below normal because there is this big meeting where our rulers are going to announce we are all roasting to death and thus need to pay high taxes to them.

Even as United Nations negotiators gathering in South America this week expressed optimism that they may finally achieve a deal, experts caution it may not be enough to stave off the near-term impact of global warming.

They dropped the ‘climate change’ clap trap because NOAA has just announced that even though no where on earth was it hot this last cold year, it was still the HOTTEST EVER in history!  Ta-da!  No heat records were set, it was simply hot…over the Pacific Ocean!  Ha!  The one place with virtually no thermometers though Hawaii wasn’t hotter than usual…so this ‘heat wave’ was tucked away where no one lived.

In England, Wales weather: Cold snap finally set to hit as temperatures drop close to freezing – Wales Online. It isn’t just today, like with the rest of us last summer which was shockingly cool, ditto in the EU:  For U.K., Europe, It’s One of the Chilliest Augusts in Decades; Snow …Europe Winter Forecast: ‘Fantastic’ Ski Season for Alps – AccuWeather because it will be wet and snowy just like in the 1970’s.

Europe Faces Cold Winter After Longest Warm Spell Since 1964: duh.  This is due to the fact we are sliding into another very cold cycle that will last 30 years. Colder weather in Europe to start setting in from Jan: WSI which makes the news from NOAA that this will be the hottest year ever in all history total bunk.

November will go down as being…warm?

OKLAHOMA CITY —When we go back and look at the record books for November 2014… one will see that the month was actually “warmer than normal”. Sounds weird right?

How is this possible? According to my most recent heating bill it was quite cold this month.

November 2014 in Oklahoma will actually go down as a very cold month. But not record cold. As of this writing the average temperature for Oklahoma City was running about 4 degrees F below normal. Cold indeed but not the coldest.