Much of the Country Will Ring in the New Year With Very Cold Weather – weather.com: snow in the hills of LA and Las Vegas, Southern Arizona, too.  Now, global cooling his hammering the last spot where global warming was hanging on with its fingernails.  Thus does the Hottest Year Ever end with a cold Arctic blast.

Ice and plunging temperatures forecast as New Year’s Eve approaches as it gets colder and colder in the Northern Hemisphere.  Understanding climate is fairly easy.  During all Ice Ages, the equatorial section of the continents barely noticed this.  If it was cooler, it wasn’t enough to drive evolution very much.  The only exception is the volcanic eruption in Indonesia 73,000 years ago.

This plunged the equatorial band into a short but deadly cold cycle.  Deadly, that is, for the Naked Apes who thrived during all the Ice Ages living in the warm parts of Africa.  The humanoids living in Asia were pretty much exterminated during that volcanic winter and the ones in Europe struggled to survive afterwards, like the now extinct Neandertal people. 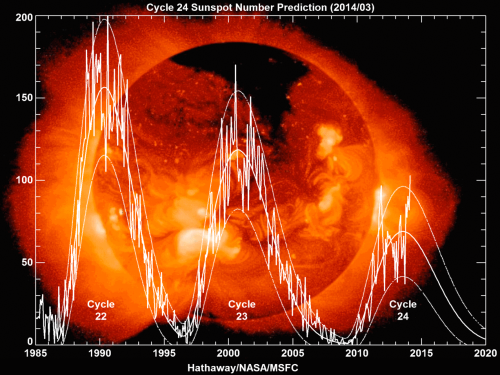 We are in a very weak solar cycle which is why the Hottest Year Ever is delusional propaganda cooked up by the IPCC which is desperate to keep the global warming issue on the front burner which has turned into a refrigerator.

This solar cycle not only has been weak, it has run fairly long now with its highest point of activity being late September into October which is why we saw a surge in warmth, briefly.  We will have a happy new year thanks to the weather since it will finally be very cold in LA and Santa Monica’s beach community and thus, all the rich loudmouths will see that global warming is no longer happening even in California. 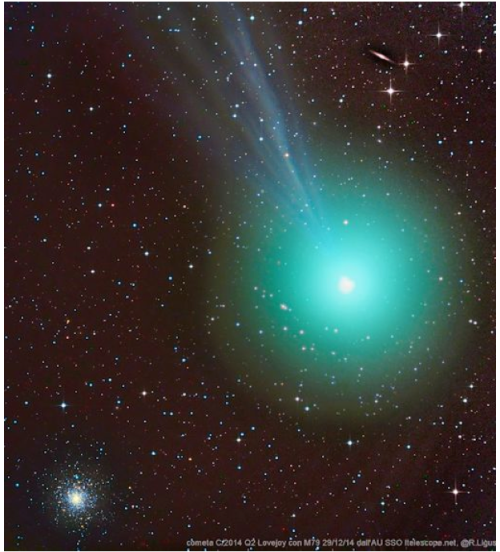 This new year is seeing a lovely comet.  This one is blue/green.  SpaceWeather.com — News and information about meteor showers, solar flares, auroras, and near-Earth asteroids

On Dec. 28th, Italian astrophotographer Rolando Ligustri used a remotely-controlled telesope in Australia to capture this image of the comet passing by star cluster M79:

The green gas is similar to this comet:  Why Is Comet ISON Green?

“ISON’s green color comes from the gases surrounding its icy nucleus,” says SpaceWeather.com’s Tony Phillips. “Jets spewing from the comet’s core probably contain cyanogen (CN: a poisonous gas found in many comets) and diatomic carbon (C2). Both substances glow green when illuminated by sunlight in the near-vacuum of space.”

C2 pollution!  Ha.  Now that gas is deadly unlike CO2.  Maybe the Pope can tell us about this.

Another New Year: ebola hasn’t vanished nor stopped.  It spreads relentlessly in West coastal Africa.  All statistics are suspect due to the fact that 90% of the cases and deaths are not really reported since they happen in the hinterlands where no one really wants to venture.

How Ebola Roared Back  Patient Moved to London; 2 Others Tested in Britain and elsewhere due to bringing back the doctors and nurses. Ebola case confirmed in Glasgow hospital while health workers from Europe and the US demand to not be put in quarantine when they come home which is crazy and self-centered.

After Slow Ebola Response, WHO Seeks to Avoid Repeat – WSJ

Last, on to Eastern Europe and the US/EU attempt at restarting the Cold War:  Ukraine Nuke Plant Taken Off Line and TASS: Economy – Ukraine hit by 7.5% GDP fall, 100% currency devaluation — National Bank head.  The US and EU lent the coup in Kiev many billions of dollars and now that is going poof.  Greece is teetering on the edge of collapse again, too.

Not to mention Eurozone economy in decline again: EU officials.  In the last few hours of 2014 comes this news:  Europe deflation fears are back after weak data.  What did they expect?  Slug Russia and then what happens?  The idea that nothing would happen was insane.

Poor Norway.  Dependent on selling energy every bit as much as Russia, they are now seeing a collapse in revenues, too.

Atlas V launches NROL-35 out of Vandenberg | NASASpaceFlight.com: Note the black magic icon for this rocket:

United Launch Alliance has conducted its final launch of 2014, making use of a new upper stage engine on its Atlas V rocket to deliver a National Reconnaissance Office payload into orbit. Friday’s launch of NROL-35 dodged the weather and occurred at 19:19 local time (03:19 UTC on Saturday) from Space Launch Complex 3E at Vandenberg Air Force Base.

Although mission details are classified, the rocket was believed to be targeting a Molniya orbit – a highly elliptical trajectory with a period of 12 hours. The orbit is named after the Soviet Union’s Molniya communications satellites which were the first spacecraft to make use of the orbit.

Yet  another spy rocket which is all about intimidating Russia and China.  Our rulers continue to work towards WWIII.  This is their only plan for dealing with massive US/EU debts held by both Russia and China. Russia Launches European Communications Satellite Atop Proton-M Rocket because even our stupid allies don’t want to use NASA.

And even while working their hardest to destroy Russia, still need Russia’s superior technology and cheaper prices.  Even the US has to use Russian rockets to service the space station.  And we come to a hysterical close to this last year.  A year filled with lots of attempts at starting race wars, WWIII, religious wars and coups, false charges, cooking statistical information and of course, ridiculous banking systems kept afloat via ZIRP regimes across the planet.

An insane year closing with a comet of poison gases.  And a blast from the super cold Arctic.  Everything is widdershins.  Salute this fun stuff tonight!  Russia parties the latest on New Year’s Eve, while China and Israel turn in the earliest which is a hilarious headline.  Even though it is bitter cold, the Russians stay up all night and night is long and there is lots of vodka so there is incentive to stay up, no?