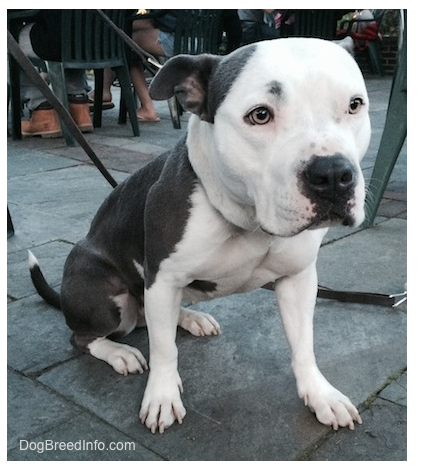 Bullypit Info, American Bulldog American Pit Bull Terrier Hybrid Dogs, Bullypits: I have owned and trained plenty of dogs of all different sizes and temperaments.  My first one was a collie, Lassie, of course.  When I was just a small child, the dog and I were close buddies as was Door Kitty (named by myself because she was a stray).  I am just horrified at what is happening to dogs these days.  Breeding them for violent, anti-social behaviors leads literally to deaths, often of the owner or the family where these killer dogs live.  People seem unable to understand how dogs and be bred to be vicious and dangerous and all the training in the world won’t make them safe to live at home.

The rage for pit bulls has gotten entirely out of hand thanks to Cesar Millan‘s tireless efforts at minimizing the dangers of associating with this breed of dog.  I have written to National Geographic years ago demanding they cancel his dog show because of his dangerous propaganda about how lovable these dogs arr.

Here is a website dedicated to lying about the latest fad breed, the Bullypit | Bullypits – Bulldog x Pit Bull cross is about as dangerous as one can get:

Personality: The Bullypit is a fun-loving dog who can also be protective.

Family Dog: The Bullypit makes a great family dog but may be reserved around other dogs and strangers.

Training: The Bullypit is a powerful dog who should begin training at a young age while they are still small.

Barking: The Bullypit typically does not bark very much.

Size: A fully grown Bullypit can weigh between 50 to 100 pounds.

Hindquarters: The Bullypit is narrower in the hips than they are in the front.

These are dogs that don’t give warning barks!  They attack silently!  And these dogs are now bigger, 100 lbs of killer dog lunging at someone is very highly dangerous.  Bull dogs were the original pit bull dogs which were bred by British dog fanciers to be this toad-like, warped creation with stubby legs so it couldn’t leap on someone’s throat and kill them.

But the cross breeds can!  Every bull dog I ever knew was short tempered.  I could handle them but I watched them terrorize others who are not used to controlling cattle and horses.  My experience handling huge animals meant dogs didn’t intimidate me much.  But then, if a dog attacks me, I will try to kill it and dogs seem to know this just looking at them.

People who have pit bulls protecting them don’t often understand that these dogs are not loyal at all, they either take over the house and everyone obeys them like walking on eggs around them, giving them whatever they want, obeying the dog’s commands or there is an alpha male who the dog fears and gives way to and then these pit bulls wait until the Master is either disabled (falls down, for example) or is out of the house and then the dog attacks the rest of the family to improve its wolf-position in the pyramid of power.

This is why they can’t be trusted.  They can bide their time for years if necessary until the dog figures it is time for a revolution in affection and control and launches an attack inside the ‘dog pack’.  Wolves do this, too.  It is a very powerful force in some dog breeds.

The reason why herding dogs don’t kill even remotely as many people as pit bulls is due to the fact that herders killed any dogs that killed livestock or anyone.  Whereas pit bulls are an English breed that was created precisely to fight and try to kill bulls.  The polar opposite.  A number of herding dogs are becoming more wolf-like and are increasingly irresponsible due to breeding for looks, not character and so are not killed off if they prove to be biters, not protectors.

Click here to see how a Dog protects it’s pregnant owner from boyfriend trying to touch her baby bump.  This dog is actually a boxer/pit bull mix.  The young lady pets the dog and laughs as it bites her boyfriend, he actually shakes his hand in surprise because the dog bit him rather hard.  Not only is this bad training, rewarding the dog for attacking someone in the home for no reason, the dog is #1, it controls what the woman does and who gets to touch her.  She is a doggie bone to it.

And it is a male dog which makes this more dangerous because male dogs kill babies of their bitches if they think the babies are not their own babies and they can tell by the smell which is why they have a terrifying record of killing and biting babies and small children of the women they are ‘protecting’.

Owners of a pitbull that attacked a boy refuse to give up the dog which means, I would suggest, they lose custody of their child.

He told MyFoxTwinCities.com: ‘[My son] is by my side the whole time, within about a foot and I turn about 45 degrees to throw some paper plates in the trash, and I heard this ‘ruff ruff.’

‘The dog just came out of nowhere.’ 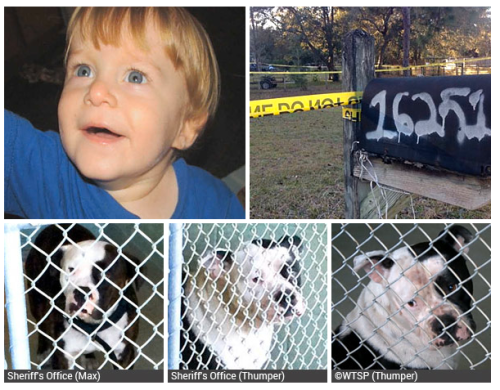 The Hernando County Sheriff’s Office released still images of both fatally attacking dogs to their Facebook page yesterday along with a message to so-called “animal lovers” who are upset that the sheriff’s office also allowed the media to capture video footage of the dogs. Max and Thumper, both male pit bull-mixes, attacked and killed 18-month old Declan Moss on Monday. Quickly afterward, his mother Sheila Moss defended the breed of the dog…
it is outrageous that a devastated young mother would ever say these things — rushing to defend the breed of dog and piling on pro-pit bull propaganda — in the immediate wake of her own child’s vicious dog mauling death. How will the veterinarian rule on the breed of the dogs? Perhaps an Alapaha Blue-Blood Bulldog or other known pit bull mislabel?

In a separate video, neighbor Charles Shorey breaks down on camera. “He was a beautiful kid. I feel sorry for the mother. She’s single. She’s fighting and struggling,” Shorey said. It is unclear if it was Shorey or another neighbor who told News Channel 8 the dogs were pit bulls and had killed smaller dogs in the past. The grandfather was babysitting when he saw his grandson was in trouble, the segment states, “but he couldn’t get the dogs off the baby and off of each other.”

A little over a year and a half ago, a Two-year-old boy killed by family dog in Fulton County – CBS46 News

“It was like a horror movie. It was like something I’ve never seen before,” said one woman who asked to remain anonymous. “We’re traumatized. The images are still in our minds. I can still see the baby.”

Fulton County police said the boy’s mother went to the bathroom and returned to find her child dead.

Police said the family had the dog for eight years.

The temperament is hard to predict, but it’s not uncommon to see the stubborn side of either breed come out; both Pit Bulls and all types of bulldogs tend to be quite stubborn. The Pit Bull bulldog hybrid will more than likely be quite intelligent, loyal, protective, and hard-working. You may see boredom and behavioral problems if you don’t exercise the dog properly.

The temperament is not hard to predict.  It is ridiculously easy to predict.  This ‘stubborn’ side is all about killing, power and domination. The dogs don’t give up.  Once they launch their attack to change the dynamics of the wolf pack in their own favor by killing or driving away unwanted family members, you can’t stop them easily, the best solution is to shoot them dead.

They are NOT ‘protective’ of YOU, they are protective of THEMSELVES.  If they figure you will obey their demands, they might spare you but then, if you annoy them by asking them to be #2, they bide their time like these dogs: Indiana man mauled to death by his pit bull on Christmas Day – NY Daily News

The family say that had given Fat Boy bones for Christmas and the death was a freak accident.

Rodriguez said the family had never before had problems with the dog but in a police report the responding officer wrote that Cahill had been told to euthanise the dog because it was violent and unpredictable.

I once had a dog that decided to move up the power pyramid by attacking me.  This led to the #1 member of the pack killing it.

Pit bull kills 87-year-old Frederick man as he takes down Christmas tree in his own home!

And as always, and this is also like the above stories, recent news, a Pit bull kills smaller dog, bites woman in Severna Park and they wanted to kill the lady but she was rescued by brave strangers.  Strangers are always in grave danger from these breeds.

Malaki Mildward, 7 was killed by 4 pit bulls at home:

For clarification, these children were Malaki, 7-years old whose mother is Amber Braymen and biological father is Xavier Mildward. Braymen is Hicks’ current relationship and brought the male pit bull, Shipper, into Hicks’ home. The mother of a teenager living at the home left a female pit bull, Road, at Hicks’ home last February. Road is the mother of the litter that produced two fatally attacking dogs. The third child is the 10-year old boy that was bitten by Road in mid September.

The 10-year old boy’s mother, Talana Auten, told the World-Herald that her son had bite marks and bruises on his left leg on his knee and thigh areas. Auten’s husband reported the bites to Afton Police Chief John Coulter. The chief then referred the couple to the Iowa Department of Human Services (DHS). Auten said she then filed a report with DHS and took photos of her son’s injuries. Unfortunately, these cell phone images were lost when her phone stopped working.

Auten said that a Page County DHS representative subsequently told her that the bite report had been classified as unfounded. Thus, there was no follow through by any government agency afterward. On Monday, Sheriff Lyle Palmer told the World-Herald he was still conducting interviews about Malaki’s mauling death and was previously unaware of the September biting incident. The investigation into the biting incident is still ongoing and there could be future developments.

So, the child was attacked earlier and survived, little was done to remove the dogs so they renewed their assault and succeeded in eliminated the excess human since they had a litter, they wanted to expand their ownership of all the food and affection. Which is very much wolf-behavior.  Sadly, the ASPCA still is delusional about these dogs:  Position Statement on Pit Bulls | ASPCA claims that ‘socialization and training’ will fix this breed and make it safe for families with small children and elderly and neighbors and other people’s pets, etc.  This is false.  They still put up pit bulls for adoption.