“I believe we agreed on a big deal. We agreed to a ceasefire starting at 00:00 on February 15,” Russian President Vladimir Putin told the media after the talks were finished.

“The main thing achieved is that from Saturday into Sunday there should be declared – without any conditions at all – a general ceasefire,” Ukrainian President Petro Poroshenko told journalists in a separate statement…

A compromise decision was taken over the disengagement line, which was the biggest stumbling block in the negotiation. According to the document, Kiev’s troops would pull back heavy weapons from the current frontline. The rebels would pull back from the line as it existed in September, when the previous ceasefire agreement was signed.

I predicted this would happen.  WWIII would be very ugly and all of Europe destroyed so the clever NATO nation leaders kicked Obama and Kerry and the US State Department to the curb, held secret meetings with Putin and surrendered to him quietly. 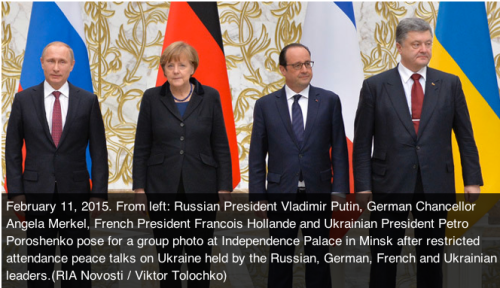 This picture makes it perfectly clear.  During the G8 meetings in Asia, the US published lots of pictures showing US allies in Europe and Asia shunning Putin and being openly, childishly nasty towards him.  Look at those FOOLS today with Putin: frowning, unhappy, resigned souls every one with Putin looking like the cat that ate three canaries.

He engineered this, he pulled this off, he did this, the same week the lunatics who have destroyed the US military in stupid wars with Muslims, put out a story that Putin is stupid and mentally deficient unlike them and I retorted that THEY are the brain damaged idiots, not the Russians.

The people who put out that report about Putin’s brains should be fired.  The entire Pentagon should be totally taken apart and rebuilt with smarter people.  The State Department should all resign in disgrace and bring in new blood.  I am up for hiring.

HAHAHA, they never, ever listen to me.  Even when I informed the CIA back when I was 13 years old that Russia and China were engaged in a border war which was secret but I heard about it from Radio Bulgaria on the short wave radio my father used for his CIA work.

They didn’t believe me deliberately because they wanted to keep rolling the false story that China and Russia were allies.  I learned from the Vietnamese diplomats in Paris in 1968 that Russia was their best ally and they were preparing for war with CHINA once the US is driven out.  I told the State Department about this, too.  No ability to listen.  They didn’t talk to the North Vietnamese in Paris but I could.

Dummies!  They lost the Vietnam War and many people died in that war, we gained nothing, it destroyed the value of the dollar, it sent our economy spinning into a recession, and we are now in the exact same fix except the people we are now fighting are ten times nastier.

Trillions down the drain due to using military muscle wrongly!  Trillions of dollars and over a million people dead over the years for…NOTHING!  Absolutely nothing.  Nada.

Merkel secretly met with Putin because the US spies on her private phone so she arranged direct transmission with Putin in Moscow.  She twisted arms because she has a very clear idea what Berlin would look like if she didn’t force the fool in Kiev to surrender.

Merkel will now have to face down the Zionist neocons and the bankers and force them to surrender Ukraine.  Ukraine, as I predicted, will split in two.  It must since the EU has decreed this is the best solution for all people who wish to have sovereignty of some sort.

Like Scotland.  The Scots are steaming as the London promises collapse.  A flood of voters are reregistering to the Scotland party leaving Labour.  Britain will break apart next.  Northern Germany and Southern Germany have less in common than people realize.

When I lived there I spoke Northern German.  I lived in Southern Germany and everyone said I sounded stupid.  It took me half a year to learn the new dialect and speak it well.  Seriously, these are different languages basically that were once written differently, even.  The Brothers Grimm were linguists living on the border of North/South Germany and they made a dictionary of the southern language.

Hitler was Southern Germany as well as my father’s relatives who lived in the Alps. The point here is, all EU nations are breaking up into smaller units and so should Ukraine since half wants to be part of the dying EU system. They hope to loot the US for funds via the EU as well as loot Germany which is reeling from Greece refusing to pay its debts to German bond holders already and there is a100% chance German banks holding debts of Ukraine are going to go bankrupt thanks to all this.

Well deserved!  Hope they all learn an old, old lesson.