Both liberals and conservatives exaggerate and say stupid things in order to parade about, freaking out over all sorts of things in public.  This sad parade of fools plagues TV which is why I don’t watch it.  But I do read about it and here is today’s multiple examples of this sort of childishness:  Fran Lebowitz: When Giuliani was mayor an unarmed black man was killed every 5 minutes claims this delusional liberal.  She said, if you do the math, if ‘unarmed blacks’ were shot by the NY police ‘every 5 minutes’ so this meant a quarter million were killed a year.

Over 8 years that would be over 2 million.  This TV debate between several prominent global warming liberals is a classic example of delusional and confused thinking coupled with gross exaggerations to score points in a pointless debate where everyone agrees with each other.

After noting that Scott Walker — who was hosting the event at which Giuliani made these statements — failed to denounce Giuliani for them, Lebowitz said “of course they didn’t, because that’s the thing, they agree with it. It’s not that they’re holding back their criticism — it’s that they have no criticism.”

This is in reference to Giuliani saying something unkind about President Obama.  I remember the left during the Bush years.  They called him a ‘chimp.’  One liberal website calls itself to this day, The Smirking Chimp | News And Commentary from the Vast Left-Wing Conspiracy.  Imagine a right wing website calling Obama ‘smirking chimp’?  The hysteria on the left would be through the roof.

“The problem [conservatives] have,” Bill Nye chimed in, “is their primary and the general [election].”  “Yes,” Lebowitz replied, “because the lunatics vote in the primaries and Americans vote in the general. That’s why we don’t have a Republican president.”

The left constantly called President Bush ‘chimp.’  Not one liberal denounced this.  There is even websites named after Bush Chimpanzee such as The Smirking Chimp | News And Commentary from the Vast Left-Wing Conspiracy.  But what if anyone calls Obama ‘chimp’?  Hysteria reigns.  Judge: Editor Must Answer Questions About Controversial Cartoon as Murdoch’s public apology for its publication was made due to the fact that media giants who are also Bilderberg guys, yelled ‘racism’ at the top of their lungs.

Here is the cartoon:

The dead chimp isn’t Obama, it is the stimulus bill.  But this isn’t even as offensive as the Charlie Hedbo cartoon in France: 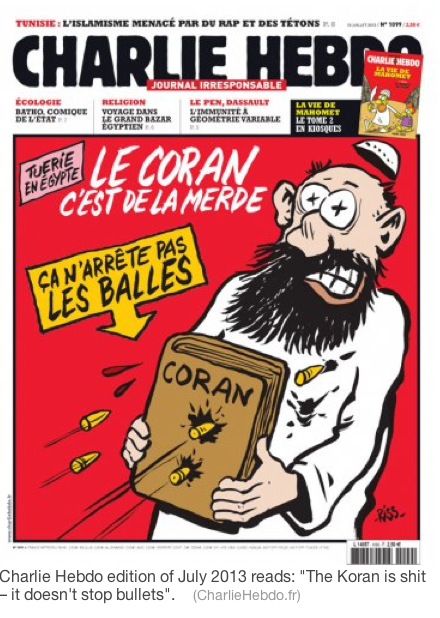 THIS is the cartoon our rulers marched in Paris, demanding ‘free speech’.  They even endorse the obscenity in this cartoon and the above cartoon showing a dead chimp doesn’t have obscenities attached.  Our rulers were just fine with the above cartoon but had to have ritual fury about the chimp cartoon.  There is HUGE censorship in the US.  Gigantic.  Anyone who breaks the rules is attacked by free speech liberals.

Liberals also want to silence anyone who points out that the world isn’t roasting to death, either.  We are not allowed to discuss even science issues anymore so long as the Bilderberg rulers join with ‘liberals’ to silence anyone daring to say or cartoon anything that irritates these powerful people.  Meanwhile, the liberal agenda is dying and liberalism is collapsing due to its own inability to be reasonable, fair or sane.

The last election was a warning shot across the prow.  Liberals no longer run Congress.  Soon, they won’t run the Presidency, either.  They threw this all away by shilling various stupid things instead of fighting off the trade deals and other games of the super rich.  Instead, they openly talk about freezing us to death and this being good for the planet because humans are evil.  Back to this gang of lunatics who monopolize TV and who represent ‘liberal thinking’:

Maher then pointed out the other thing Giuliani said, that “it’s not racism, it’s socialism, or possibly anti-colonialism.”

“Where are our colonies?” Rob Reiner asked. “We’re the colonies! We’re against ourselves!”

This is what goes on at FOX TV, too.  The far right and far left both love straw man arguments.  Pretending people say or believe ridiculous things they don’t say or believe and then attacking them as ‘stoooopid’ is a common tactic used by bullies and jerks.  The US does still have ‘colonies’ ask anyone from Puerto Rico, just for example.  Then there are the quasi-colonies like the one that owns Congress, Israel.  Ukraine’s western half is now a quasi-colony, too.

“Exactly,” Maher replied. “Isn’t colonialism bad? I thought we were all kind of on that page, and now it’s bad to be anti-colonialism? I mean, what was George Washington fighting against?”

Instead of examining what went wrong during the last election and why Obama refused to stop travelers from ebola nations in Africa, after a summer of race riots and race baiting from the White House, the majority of voters turned decisively against the Democrats who are screaming we must put police officers in prison for shooting blacks when black criminals attack the p0lice…a VERY unpopular position for the vast majority of Americans!  It was painfully obvious to me that these liberal positions would be immensely unpopular.

Here is the right wing whining about Obama’s inability to launch WWIII:  John McCain: ‘I’m Ashamed Of My Country | The Daily Caller.  McCain wants us to bomb Moscow.  This isn’t his official position but the end result of his desire to teach Putin a lesson.  Too stupid to figure out how WWIII would go, he thinks the US can push anyone around and there be no consequences even though the illegal Bush invasion of Iraq has caused more radicalism, violence and war across much of the planet all of which is rebounding in Europe and America, of course.

Both left and right want endless wars, censorship, attacking each other for being ‘unpatriotic’ and of course, more lunacy of all sorts as we spin out of control.  How sad this all is!  How useless.

Now for some really bad news: No injuries reported after Kardashian car slides off road.  Rats.  Still running around, being annoying.  At least they didn’t kill some innocent bystanders this time with this crash.  More bad news: the Oscars ceremony was ruined by RAIN in LA.  Another liberal talking point dies.  Oh, the mercy!  LA is supposed to be dry and hot and thus prove we are all going to roast to death if we aren’t run over by the Kardashian cars.