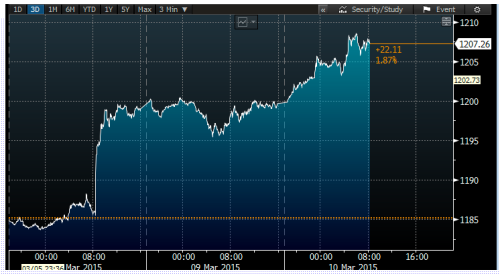 The Dollar Is On a Tear as the Euro dies.   EUR/USD hits fresh 12-year lows below 1.0750 and another headline is interesting: US dollar freight train crushing all in its path today.  This is very simple to understand.  First of all, all our trade partners in Japan, China, Europe, wherever, love running trade surpluses with the US.  The US is extremely deep in debt to all other countries because of this and our central bank prints money like crazy which is why groceries are ten times more expensive today than 20 years ago.  Even so, the trade deficit eats all these excess dollars and FOREX holdings of all other nations absolutely bulges with trillions of US trade dollars held out of circulation.

The euro is a special case.  Europe decided to destroy itself by going to war with Russia in Ukraine.  To win this very violent war which was caused by a coup in Kiev engineered by NATO and the EU leaders, they imposed a quarantine on trade with a major trade partner, Russia.  Russia retaliated in like kind and now things are in the deep freeze.

It is very cold in Europe this month.  Bulgaria – State of emergency in the Republic, Batak, Yakorouda and Mineral Baths in Haskovo region as seven feet of snow falls there, Greece – Many villages blocked by more than 2 meters (7 ft) of snow, there is a Blizzard in Vladivostok whileItaly captures the WORLD one-day snowfall record of 8.34 feet in 18 hours. 13 Feet of Snow in the Pyrenees in 3 days in Spain.

Switzerland, which just voted overwhelmingly by 96% of the vote to not follow Germany’s lead in destroying their energy systems to stop ‘global warming’ that doesn’t exist, started the run on the euro back when they revalued their currency due to the differential between themselves and the rest of Europe.

Dollar hits multi-year highs versus euro and yen, Aussie sags on China data as China sees some contraction in their own economy since no economy can run red hot all the time forever.  I remember the birth of central banks: it was to stop bank panics and depressions.  Didn’t work, of course.

A lot of speculative bids from short-term players are likely to support the dollar until next week’s FOMC (Federal Open Market Committee), when the Fed could drop the word ‘patient’, said Kyosuke Suzuki, director of forex at Societe Generale in Tokyo.

Any move to exclude “patient” from the Fed’s statement after its March 17-18 policy meeting in the wake of strong employment would be seen as paving the way for an earlier rate hike.

Amid such expectations a significant overnight drop in U.S. Treasury yields, usually a negative factor for the dollar, failed to douse the greenback’s strength.

Instead of making peace with Russia, the NATO nations are shoving military right up to Russia’s borders and exhibiting how weak they are in public which to my mind, is rather stupid.  The Russians are feeling very aggrieved due to the Kiev attacks on Ukraine citizens who speak Russian.  The rest of Europe doesn’t emotionally want to fight at all whereas the Russians are very hot and angry which means they have motivation whereas NATO troops have little to none motivation.

Nikos Paraskevopoulos said he was “ready to approve” a Greek Supreme Court ruling in 2000 that would allow the appropriation of assets belonging to Germany’s archaeological school and the Goethe Institute. Proceeds from the property would be used to compensate the relatives of 218 civilians who were massacred by Nazi troops in a village in central Greece in June 1944…

The two countries are already squabbling over Greek demands to renegotiate the terms of a €240 billion ($260 billion) bailout. However, with Germany showing few signs of leniency, the new left-wing Syriza government has decided to raise the issue of war reparations again with Berlin.

All confederations collapse during economic downturns and wars.  Even in the Civil War, the southern states adamantly refused to help each other.  They each fought pretty much separately and were pried apart, bit by bit.

BOJ chief defends inflation target which involves printing money like crazy.  Little of this money ends up in the hands of consumers and workers in Japan who have miserable lives that have seen no pay hikes in nearly two decades.  Poverty grows there like mushrooms and it is all very sad and tragic and quite doomed.  But it does make exports much cheaper and these are thriving for now.  Just the country itself is dying.

China’s yuan breaks into the world’s top five as payment currency-SWIFT | Reuters which is big news.  China is basically the world’s #1 manufacturing power.  All manufacturing powers win major wars with weaker economic powers.  Germany would have overwhelmed England if it weren’t for going to war with Russia, for example.  The US won WWI and WWII due to being the manufacturing powerhouse that armed and made mobile all of its allies.

Now we have nearly nothing.  Especially making steel and major manufacturing hard metal items.  China has it now.  And the yuan will eventually be the world’s most important currency and the dollar will suddenly collapse when China eliminates its dollar FOREX treasury which is over a trillion dollars.