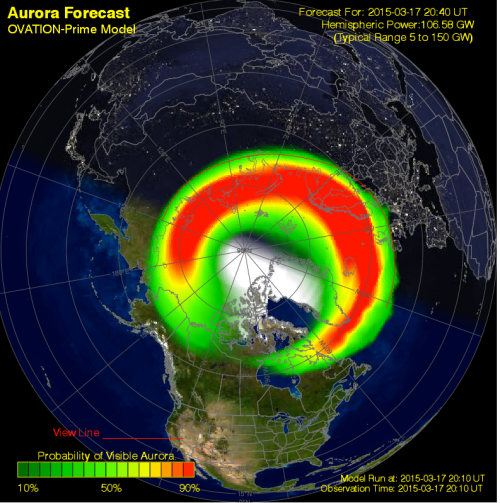 The sun just had a major burst of energy as it continues at the present solar peak.  As the debate rages onwards about what drives global warming/cooling, the sun reminds us of the elephant in the phone booth.  Even small bursts from our local star heats things up and big bursts heats up more.  This is why solar cycles with lots of sun spots coincide with global warming and when there is little sun spot activity, we get ice age conditions.

CME IMPACT, SEVERE GEOMAGNETIC STORM: Arriving earlier than expected, a CME hit Earth’s magnetic field on March 17th at approximately 04:30 UT. At first, the impact sparked a relatively mild G1-class (Kp=5) geomagnetic storm. Since then, however, the storm has intensified to G4-class (Kp=8), ranking it as the strongest geomagnetic storm of the current solar cycle. This storm is underway now. Before sunrise, bright auroras were sighted over several northern-tier US states including Minnesota, Wisconsin, Montana, the Dakotas and Washington.

There is also a lot of coronal winds, too.  Especially at the southern pole.  The sun is still at its truncated solar peak. 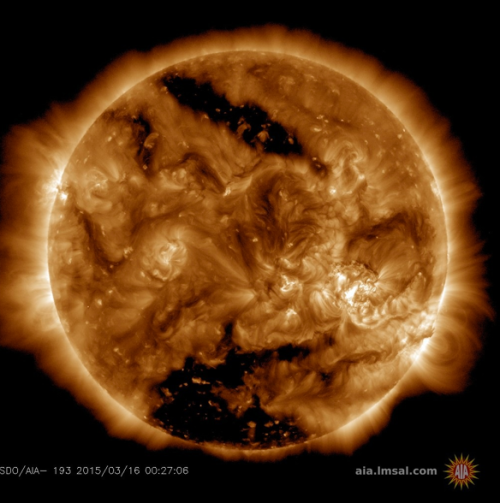 It amazes me to see even ‘global warming skeptics’ claiming the sun has little variation.  Or that the variable is less than 5%, less than 2% so it is ‘small’.  2% of a gigantic object that utterly dwarfs the size of our planet or even the gas giants that circle this star, is HUGE.  So ‘small variations’ have gigantic impact especially when the sun’s explosions of energy smack the little tiny circling rock that is trapped in its gravity pool.

And if the local star ceases these frequent slaps of warmth, the little tiny rock that buzzes around it gets significantly colder and we call these ‘Ice Ages’.  These have evidently (at least, according to latest studies!) getting more and more extreme, that is colder and warmer up and down which means to me that the sun is getting more erratic and violent.

So when it is quiet and things freeze on earth, it is very quiet and then when it suddenly, roughly every 100,000 years, wakes up, it is extremely violent at the beginning of the warm cycle.  The ‘complex models that go wrong’ do so mainly because they peg the sun’s input as ‘steady state/small’ so as to make all the other beloved values and systems look much stronger.

This causes people to not see why we have Ice Ages or why these end instantly with very high temperatures that happen with no known cause except for one: the sun becoming rather hyperactive.  The idea that our star is not a steady state star but has entered its variable star stage is dawning on astronomers but climatologists still can’t accept this fact nor what it means.

This is why they minimize the potent power of a mere 2% alteration in solar output though I would guess the drop in energy is greater than that during the Ice Ages.  The problem isn’t ‘Does this star have a regular amount of energy?’ but rather, ‘Is the frequency of solar storms and surges in energy the cause of Interglacials?’  Since 80% of solar storms miss the earth entirely due to them happening when the solar storm is turned away from the earth, these don’t heat things up, this happens only when the sun spots are aimed right at where the earth happens to be circling the sun.

So if the frequency drops by any significant way for long periods of time, the lack of these warm surges causes the oceans to get colder and this leads to glaciation increasing.  The equator still gets the ‘regular star heat’ but no hot stellar events means it becomes much colder than mere percentages of heat would suggest. Below is a comment on the Monckton paper:

For now, let’s consider the following: “Next Mr Born says we have incorrectly assumed a steep initial increase in temperature response.” That’s misleading; I objected to the response not because of what it was but because of the way it was arrived at. As we shall see, though, Lord Monckton actually did get around to giving a straight answer to my real objection. So let’s recall what that objection was.

The values in Gerard Roe’s paper for time t were based on the stimulus’s having assumed its current (in that case, 4 W/m^2) value t years before. But Monckton et al compared the resultant output with that of a system whose stimulus rose gradually. Note the distinction between stimulus and response. I wasn’t objecting because Roe’s response rose gradually, I was objecting to the fact that apples were being compared with oranges. Essentially, this is what Monckton et al. were saying: Since the response of the model Roe relied on had a given value y at a time t years after its stimulus assumed a certain value x, we’re going to take y as our model’s output whenever the current stimulus is x after having increased for t years.

In any but the most trivial of systems, the current output depends not merely on the current stimulus value but also (and, typically, principally) on its history. Now, if the radiative forcing had been a step function, then taking the Roe value for t years after the step occurred would have been proper. For any other stimulus, though, that approach is improper. For any other stimulus, you have to convolve that stimulus’s rate of change with the step response; you can’t just pick a step-response value. So, even if we assume that Roe’s model was correct, and even if we assume that Monckton et al. correctly copied the corresponding value into their Table 2—Monckton et al.’s used Table 2 improperly.

But then Lord Monckton actually gave the authors’ rationale for the approach they took. He had inferred from his epidemiological work that assuming a stimulus step rather than the actual, gradual stimulus change makes little difference. He said of that experience that “assuming a single stimulus all at once produced very little difference compared with the time-smeared stimulus, merely displacing the response by a few years. Similar considerations apply to the climate.”

Of course using the step response for just any stimulus does not in general produce acceptable results, but it is at least plausible that in the case of the climate’s response to a ramp stimulus Lord Monckton’s rationale holds up. So I thank Lord Monckton for addressing an issue I actually raised.

Moreover, his answer is reasonably consistent with his Table 2 values. For the 75-year ramp used in transient-climate-response discussions, for example, the response is between 68% and 78%—or even 84% if you accept that table’s first-row values—of the step-response value.

Unfortunately, such calculations are so sensitive that such a difference can be significant. Since the fifth row’s ramp response at 75 year equals the fourth row’s step response for that time, for example, one could infer an equilibrium response that’s over three times too high by failing to take the type of stimulus into account. Still, that sensitivity is a problem that afflicts such determinations generally; it is not a particular shortcoming of Monckton et al.’s model.

The fact remains that forecasting the future in the long run is laughably easy to do.  History is our guide.  We know that when it gets colder, CO2 vanishes very fast and when it suddenly warms, CO2 shoots upwards very fast, it trails solar heating, not leads it so we can cease worrying about it and go back to worrying about the real danger: the impending future Ice Age.

This has a 100% chance of happening.  The only question is, when?  And this is a geological/astronomical question, not a climate question.  We do know that this time cycle we are in is towards the end of an Interglacial and that is very bad news for humans, we don’t have mastodons to hunt anymore.