One of the biggest snow storms of the season blankets the Alps | Ice Age Now: hurricane level winds hammer Europe.  It is still very cold where I live, not at all a normal spring.  The cherry blossoms in DC aren’t even beginning to bloom, either, which is unusually late.  The mainstream media has been hammering the story that we are tired of ‘climate change’ discussions and this, due to mysterious reasons.  Yet when I talk to normal people, they bring up often the real climate change issue: it is ridiculously cold, not hot.  They are upset about this.

Unhappiness with this brutal winter seldom makes headlines.  For example, the most extreme part of Antarctica that is furthest from the South Pole had record setting warmth for a few hours yesterday and this made headline news in our media.  This story hasn’t even made the back pages:  Canada – Big freeze hammers Newfoundland food supplies | Ice Age Now

“The ice conditions and the weather systems that we’ve been experiencing this winter, particularly this week, have been something we haven’t seen in decades,” said Darrell Mercer with Marine Atlantic last week. He said the ice began forming in early February, more than a month earlier than last year, and has been building ever since.

Meanwhile, a backlog of around 350 tractor-trailer loads of food were stuck at the ferry terminal in North Sydney, waiting to cross to Port aux Basques.

The other place our media pays attention to is California.  Whatever makes California unhappy about the weather is front page news.  Here is the latest:  Experts: Pacific food web crashing — “What’s going on? Where are the fish? Where did they go?” — “To be honest, it’s insane” — “You could equate it to a war zone” — “Food shortage all up & down West Coast” — Fishermen believe pollution harming food chain, doubt NOAA’s ‘warm water’ theory (VIDEOS).

The Pacific Ocean cycles through regular phases.  Cold and warm.  The ocean north of the equator, where it pushes against North America, has been in a warm cycle.  The southern half below the equator has been cooling down a great deal.  This changes sea life.  They call this the ‘anchovy/sardine cycle’.  It is either one or the other.

Silver Surprise: Millions of Anchovies in San Diego Surf because it is in an anchovy cycle now.  Five years ago, it was still sardines.  Massive school of anchovies swimming off California coast baffles boffins : SCIENCE : Tech Times which is funny because this isn’t ‘baffling’ at all, it is very well known.  Here is a graph showing how it works:

Sardines absolutely love global warming when it happens and they hate global cooling.  So when they vanish, it means it is colder.  This is just like the information about sun spots: for generations, astronomers and others figured out that sun spot activity produces obvious effects which can be predicted and expected.  Using information about sea temperatures via checking out if there are sardines or anchovies and then looking at sun spots, one can make very accurate long range forecasts.

Naturally, these two things have been thrown out the window by ‘climatologists’ who seem to be the most clueless scientists on earth.

To my great amazement, a major publication even explains this ‘mystery’:  Why West Coast Sea Life Has Been Behaving So Strangely — The Atlantic

The sardines came back after a couple of decades, and the stock climbed steadily into the new millennium—hence Kummer’s argument, in 2007, that sardines were ready for a culinary revival. But now the population has crashed again.

In the 1950s, the collapse of the sardine industry was blamed on overfishing. It’s tempting to blame the current decline on global warming. Neither of those factors deserve single-handed responsibility, though. Oceanographers have known for a little while, now, that there’s a natural ocean cycle—albeit, a long one that’s not fully understood—that governs the rise and fall of sardine and anchovy stocks in the Pacific. 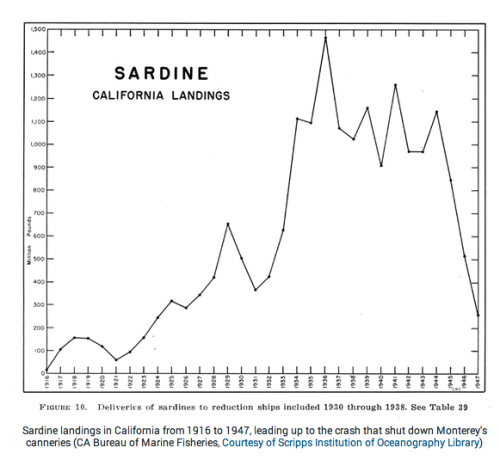 Just like today, humans were blamed for problems caused by natural forces we have little to no effect on and can’t stop or start.  Many, many plant and animal systems go through these boom/bust cycles depending on solar and oceanic effects.  The biggest cycle shifts are Ice Age/Interglacial and these have disturbed many ecosystems immensely including nearly annihilating all life forms in certain areas for over a hundred thousand years at a time.

Also in the news is the story about yet another Sahel drought in Africa:  Surviving Climate Disaster in Africa’s Sahel.  Naturally, the liberals are shouting that this is due to global warming which doesn’t exist anymore.

“The most recent of these [multicentury droughts] occurred between 1400 and 1750 CE (550 to 200 yr B.P.), similar in timing to the Little Ice Age (LIA, 1400 to 1850 CE), a well-known interval when Northern Hemisphere temperatures were cooler than at present. In contrast with earlier studies, which reconstructed wetter conditions in East Africa during this period, evidence from Lake Bosumtwi supports more recent studies suggesting that this interval was dry. Evidence for LIA drought is not restricted to Africa, however. Records from throughout the tropics, including the western Pacific warm pool, the Arabian Sea, continental Asia, and tropical South America all show evidence for dry conditions during this time period.”.[3]

The drought that ran from 1968-1978 was very nasty and coincided with severe cold winters in the eastern half of the North American continent and the collapse of the sardine fisheries.  The fishes collapsed first, in 1962.  As today, they are a harbinger of colder weather.

The Sahel will have more droughts this next 30 years and there is nothing that will stop this.  The Southwest US had a major series of droughts during the exact same time the Sahel had during the Little Ice Age and the fact that it is dry there now is a sign of global cooling, too.

The most obvious sign of global cooling is the drop in sun spot activity.  Note the little bump upwards on the present cycle 24.  The sun still is active, like cycle 23, a double hump hill.  Much lower than all previous solar cycles of the last 100 years.