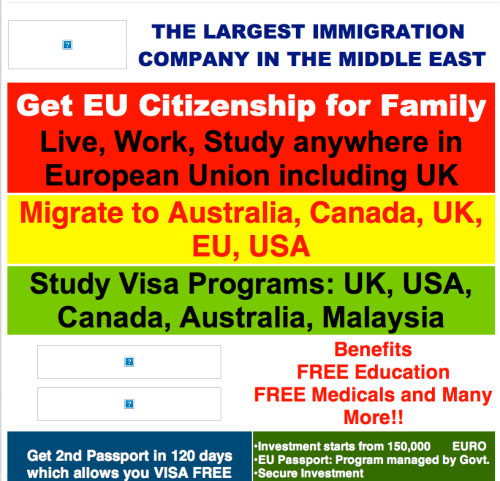 An email ad I received today all about getting into Europe or North America to steal social services and get into schools for free.

The fractured United Kingdom just had an election and despite the polls that showed the conservatives weak, they won handily.  This comes as no surprise to me.  UKIP shook up the Tories who had to stop playing the Bilderberg internationalist game and pretend for this election to care about saving England from being swamped by legal and illegal aliens out to get free stuff.   Cut welfare, shrink the state, scrap the Human Rights Act: welcome to Cameron’s Britain cries one headline.  The Labour Party was destroyed by the exit of nearly all the Scottish voters, an action I predicted last year due to the Scots voting against independence due to a bunch of promises with zero chance of being actually honored.

So, UKIP supporters rushed to the Tories hoping the Tories would stop the flood of aliens and Scots fled Labour and voted for the party that is all about freeing Scotland.  I have pointed out in the past that there are two major forces at work under the rule of the Bilderberg internationalists who created the European Union, NATO and the United Nations.  All these entities serve the very rich and powerful who meet regularly in utter secrecy screened by armed military guards who let no one anywhere close to where these creepy people meet.

These people have latched onto the wonderful idea of taxing the air we breathe, telling us that CO2 is a poison rather than vital part of what the earth needs to sustain life.  Taxing and controlling nearly everything touched by CO2 enables the rulers to dictate many terms to people including freezing them to death.  NATO has charmed itself into an international aggression force aimed at destroying many nations especially Russia and in the future, China.

Cameron, the head of the Tories, is a total Bilderberg gangster.  He is one of them.  He is making promises to voters that he has zero intention of honoring.  Hillary Clinton is a huge Bilderberg gangster.  She recently declared her policy for aliens will be even more ‘liberal’ than Obama’s policies which are already unpopular enough to enrage a lot of voters to vote against the Democrats in the last election.

A Bush is running in the GOP and he, too, is a Bilderberg and pro-replacing citizens with aliens, too.  Indeed, the reason why this is strongly held by the Bilderberg gang is, aliens are not citizens!  They have NO POWER.  They also have incentive to not be patriotic but to be alienated within whatever places they move.  The US allowed a huge amount of immigration when it was ‘open territory’ but there was a huge proviso: the children had to learn English, they had to go to public schools that taught patriotic history and they had to swear fealty to the US and not be dual citizens, all things being destroyed by the Bilderberg gang. 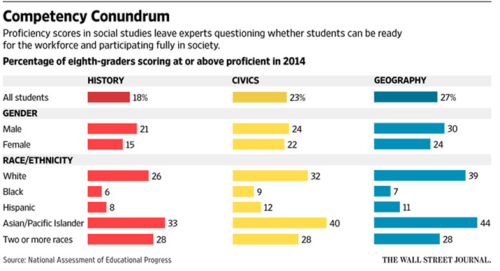 Asian students are…studious and thus, manage to eke out something resembling success despite the despicable condition of teaching in all our schools due to years of ‘reforms’ that made things worse and worse.  White students manage to do slightly worse but Hispanic students barely scrape by while black students are near total failure. 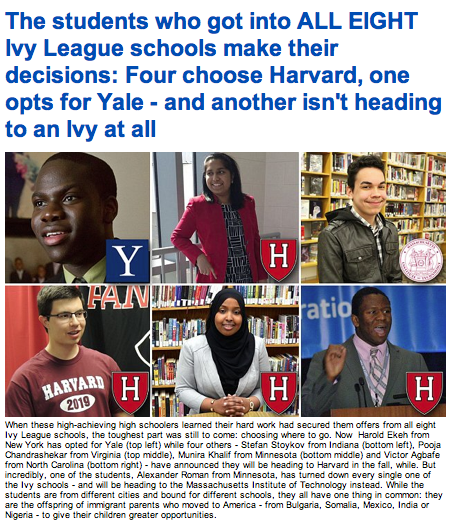 They are the immigrants that are the target of the ad at the top of this story.  As US students fade back and are burdened with huge student loans that cripple them for life due to the weight of the costs of university or college, foreign students breeze in and collect the goodies for themselves.  They don’t go, for the most part, to our lower schools that are so incapable of preparing students for university study.

We are now writhing with pain as the Common Core reform wrecks whatever is left.  Examine the schools these winners of scholarships went to: they were not schools devoted to worrying about social engineering.  Note also, no Chinese won scholarships to all eight Ivy League schools.  They are penalized for being Asian in California and have to score 320 SAT points above a black student to even gain access to the top public universities in California!

Success in lower grades is PUNISHED in the US.  Any ethnic group that manages to get something good out of our tortured school system is then kicked in the teeth when they graduate from high school.  White kids are used to being treated this way, the Chinese parents are very angry about this and increasingly explosively angry.  White parents feel enough public guilt to do nothing in public but in the polling booths, they are voting against liberals now.

Previously, GOP attacks on the civil liberties of women caused these voters to migrate to the DNC.  But if white and Asian women voters see their children punished for working hard in school, when they have to pay school taxes while not able to use public schools anymore due to the chaos, deterioration of standards, constant meddling ‘reforms’ that come from DC or rich people  who happen to be Bilderberg gangsters…no, this won’t last forever.  Any political party that stops all of this will thrive so long as it supports basic civil rights including rights of blacks to buy homes, have jobs, go to school like white people.

If the black community strives to emulate the Asian community, it, too, will thrive. Any and all reforms that make things more and more lopsided and which are cripple self-generating efforts will see social failure which black children will find nearly impossible to escape.  Back to England which is being swamped by foreigners seeking free stuff: Anti-hunt campaigners ‘to work with Tory MPs’ to stop Cameron lifting ban.

Prince Charles, the environmentalist, used to hunt foxes and didn’t like the ban.  This issue still haunts the upper classes.  It defines what is ‘noble’ since peasants were forbidden from hunting and had to allow hunters to run rampant over their properties which is why the horses were trained to jump hedges and fences in the first place!