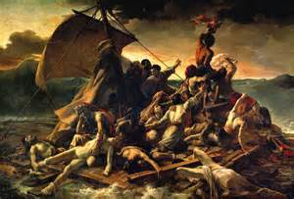 Raft of the Medusa

Both the far left and far right are foaming at the mouth lately about many things including especially race issues.  Race issues interest me because so much confusion, hatred, double standards, lies and basic deceptions surrounds these issues.  I see in daily life in middle class communities perfectly fine race relations at work and at home.  The connubiality that exists since the Civil Rights Act was signed is significant and healthy.  But where there are bad race relations has to be examined and carefully understood for we stand on the brink of race relations collapse…in the Blue Collar lower working class.  And this has been caused by free trade.

Here is the far left discussing this collapse blaming it on people who point out that the inner cities are filling rapidly with unemployable black males who have no hope of jobs, marriage, security, or anything:  Racist Hate Bloggers Can Pat Themselves On The Back Now. | The Smirking Chimp

I just visited a website where the blogger apparently is in the pay of some right wing group these days. I’ve watched this site for several years now just to seek what materializes there. In the past two years, this blogger has moved away from rather rational mainstream writings into the territory of blaming black people for the ills of black neighborhoods everywhere.

The rhetoric has become more and more anti-black with references to young black people as “gangstahs” and “thugs,”essentially blaming blacks for their own disenfranchisement in increasingly racist USA.

The writer, Jon Damos, pats himself on the back by pretending that blacks in our former manufacturing towns are not turning into drug dealing, thieving thugs and gangsters but is instead, totally unable to change anything because they are victims of ‘racism’.

I bet this guy would then turn around to the equally bad off ‘white trash/yahoo’ population of say, West Virginia, and call them all ‘racist’ even though inner city blacks are quite often openly racist and certainly leftists in general are quite racist, excusing one race for being degraded and sympathizing with them while chastising, mocking and threatening poor working class whites who are equally imperiled and facing the same annihilating forces that are destroying the black families.  Both races are facing the same doom, both struggle to deal with this via gangsterism drug dealing.

This drug dealing afflicts the ‘white trash’ countryside trailer communities and the inner city black slums.  Both chose this same solution to the collapse of blue collar jobs and this is also happening in Europe as well.  The wealth of society has moved to the very top while the very bottom has been cut loose to die like the Raft of the Medusa.  This famous painting shows both black and whites abandoned on a raft to lighten the load of a trading ship.

Charleston killer Dylann Roof grew up in a fractured home where ‘violent’ father beat his stepmother and hired private detective to follow her when they split, she claims in court papers.  This violent father with tattoos gave his son a gun for his birthday.  The father is obviously a racist and obviously ‘trailer trash’ and is very angry and as Roof’s friends from school said in the past, the boy changed when he lived alone with his violent father, for he didn’t act like a racist back when his step mother still lived with them.

Yes, racism exists!  The question is, who DOESN’T have problems with this?  In Israel, American Jews happily and with deadly force, act extremely, tremendously racist and are proud of this but when they come here, they pretend racism is evil especially ‘anti-semitism’.  But then they go back home to Israel and out pops this Nazi racism again, without blinking an eye.

No US media talks about this absurd situation and black politicians in Congress, funded heavily by Jewish election money, won’t say a peep, either.  Racism is at the core of Judaism.

I was not even slightly surprised that there were no riots after mainstream, middle class blacks who were praying in church and who are model citizens, were shot down.  Instead, the Charleston shooting victim’s families confront Dylann Roof in court ‘I forgive you’: Tearful relatives of Charleston victims confront ‘killer’ in court with heart-wrenching speeches of Christian FORGIVENESS – as he adopts a vacant, remorseless stare.

Many religious groups forgive too fast.  You cannot forgive someone who doesn’t think they did any wrong.  Justice must be served and in this case, the drug-addled, insane, freaked out murderer will pay the full price as he ought.  Like the Aurora mass killer, he must be kept locked up since he has proven himself incapable of seeking help before going on a rampage.
Outrage after Charleston judge tells relatives of murdered churchgoers that the killer’s family are VICTIMS… as it is revealed he was once reprimanded for using the n-word in court: this white judge IS a racist.  And should be barred from the bench and I suspect now that he has revealed his inability to judge dispassionately, he will be forced out.  The killer’s family DOES have victims: the mother, the step mother, the sister.  They are victims of sexual predatory males who are frustrated and mean like junkyard dogs.

And the non-racist sister shows her true nature:  Charleston shooting suspect Dylann Roof was identified by sister Amber Roof who did all in her power to help catch him when there was no direct identification of who the killer was besides the photos.

Charleston shooting branded an ACCIDENT by Rick Perry who believes Dylann Roof was acting under the influence of drugs because Rick Perry IS a ‘racist’.  This is not an ‘accident’.  This is planned mass murder.  There is no way around this fact.  The gun didn’t drop to the floor and fire.  It was directed by Roof who wanted to start a race war.

Many people on the left want this race war thinking that blacks will win and then we would all live in harmony in our Tiny Houses and have socialism along with protecting the earth from CO2 and being somewhat warmer than yesterday but significantly cooler than the Medieval Warm Period.

But I have spoken again and again about this delusional thinking.  No, black people will not win a race war, they will be annihilated and I am against this entirely for this reason.  And penning up blacks in cities and whites in poor rural holdings and hoping all the lower working class would just keel over dead is ridiculous and cruel and stupid.

I am for protectionism, I am for securing our borders, I am for not moving all our manufacturing overseas, I am for the working stiffs, not the upper classes nor the idle rich.  I am horrified that gangsterism is spreading relentlessly.  It is anti-women’s rights, anti-children’s protection, anti-social in the extreme and it is killing off, literally, both blacks and whites with blacks leading the self destruction way of life, with a huge murder rate that is terrible to behold.  And step by step, the white lower class is mirroring this decline into self-destruction.