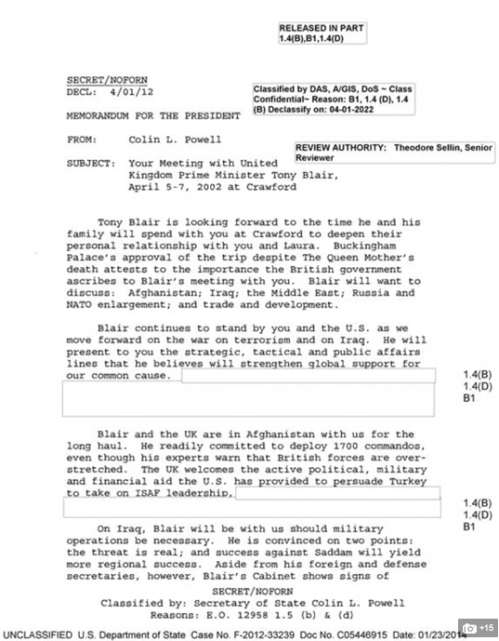 The US continues its many war crimes since the Vietnam War began, we pretended to repent with Jimmy Carter (warning: he was my father’s good friend!) and now here we are at the back end of my long life, right back where we were when I was a teenager going around the world giving anti-war speeches!  The same messes.  And Russia, instead of being weaker, is growing stronger under a smart leader who has a vague idea how history works in circles.  Unlike our poor puppet President who is ruled by the same neocons who caused 9/11 and other disasters.

Damning White House memo, from secretary of state Colin Powell to president George Bush, was written on March 28, 2002, a week before Bush’s famous summit with Blair at his Crawford ranch in Texas.

In the bombshell document, headed ‘Secret… Memorandum for the president’, Powell tells Bush that Blair ‘will be with us’ on military action.

It adds that Blair was preparing to act as spin doctor for Bush, who was told ‘the UK will follow our lead’.
New light was shed on Bush-Blair relations by material disclosed by Hillary Clinton at the order of the U.S. courts.

Every Nazi put to death at Nüremberg Trials is sitting in Hell watching this news on Criminal Nightmare News.  They are laughing and joking about how much fun they will have with these people when they die and come a-visiting.

The US war criminals get to live nice lives, free to cause pain and suffering with zero accountability here on earth but they can’t escape the Gates of Death which yawn open eventually to all living things.  But there is no good reason to let these war criminals off the hook at all!

Saddam who was a war criminal himself is laughing along with the Nazis.  There are others watching the news in Hell.  They can’t wait for their old buddies to come aboard.  This is the definition of hell, by the way.  The Bushes, for example, pretend to be ‘Christians’ as does Obama and all the rest.  This gets them a ‘get out of hell free’ card according to their beliefs.

Only…why?  Imagine Jesus telling these monsters that it is OK to commit war crimes against innocent people for many innocent people died while the giant bastards fought each other.  Jesus would not be very inclined, I believe, to do this so easily, if at all.

When I was a devout child, I honestly believed that I had to be as ‘good’ as possible to please Jesus, not be a total whack and terrorize the planet and then expect to trot off, scot free.  Otherwise, why bother with being ‘good’ in the first place?  Aside from the question of ‘what is good?’  A cosmological conundrum indeed.

I am listening to one of my favorite operas, Wagner – Götterdämmerung / Twilight of the Gods (Windgassen, Nilsson, Fischer-Dieskau; Solti) – YouTube.  I actually bought the entire Ring cycle as it was issued with these singers and orchestra back when I was a child and then got to see the entire cycle in Germany and eat dinner with some of the singers afterwards…that was pure heaven.

But back in 1968 in Germany torn apart by anti-war, anti-government demonstrations where I gave speeches and ended up being deported in the end, I had a front seat to WWIII.  It was no joke.  It was a real presence like a black cloud on the future horizon with lightning bolts and distant or not so distant rumbles of thunder.

We are rapidly approaching that era again.  I feel it in my bones.  The comfty, soft, free liberalism of post-communist cold war Europe is turning into a bonfire of mass murder and hysteria and End of Times WWIII anger and fear of a rising, stronger Russia while the EU collapses like a soufflé when you open the oven door at the same time the front door opens and a blizzard blasts into the kitchen.

Migrants fight with police after stranded in Croatia while Hungary closed its border with Croatia.  Turkey is refusing to take in the zillions of people fleeing the Israel/US/Russia/Iran/Saudi Arabia head smashing.  The old Cold War lines are identical as in the past except Saudi Arabia is overthrowing liberal governments (ANYTHING is liberal compared to Saudi Arabia except maybe North Korea!) and replacing these with chaos.

The US and Israel hoped the chaos would wreck these once-fairly liberal, for Muslims, states.  It did!  But it unleashed this tidal wave of Muslims direct into dying Europe.  Europe’s women don’t want to have children anymore and Europe’s men aren’t interested in protecting their children, the birthrate is, like Japan, now negative.

They will be replaced by foreign Muslims.  The US has been flooded with aliens, too, as the native populations grow slower and slower.  Will a future Muslim Europe go to war with a Catholic US in the future?  It is very possible!

Why does Western public opinion support Russian ops in Syria? — RT Op-Edge asks and they link to Fox News Channel:

According to the polls, 70 percent of Americans feel the US administration doesn’t have a clear strategy to handle the rise of jihadists in the country and that more than 70 percent of UK respondents support Russia’s bombing campaign.

Sir John Chilcot is under mounting pressure to publish the findings of Iraq War inquiry after a leaked White House memo suggested Tony Blair pledged his support for war a full year before the invasion.

In another year, I bet Putin could run for President in Germany and win.  Seriously.  Some smart German might rise up at a beer hall and declare he is going to do something about the defeatist attitudes in Bonn…and I used to give political speeches in beer halls in Germany when I was only 17 years old…lots of fun especially when the cops come in to stop the speeches! 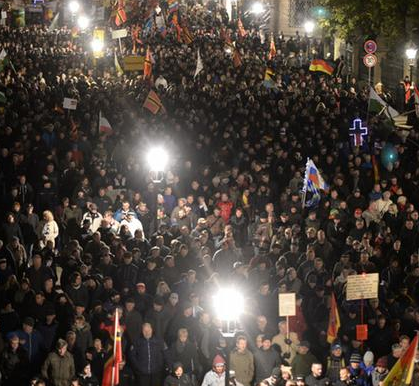 A knife attack on a local politician, mock gallows for the German chancellor at an anti-migrant march, continued attacks on refugee shelters – the mood is changing, a psychologist warns.

Moods can change on the flip of a switch.  Before I came to Germany, the mood was pro-America, anti-Russia.  While I was there, it reversed as students rioted, took over campuses, the police attacked, the Vietnam war roared onwards and US soldiers asked for help at the anti-war office front desk which I often manned and since I was an American, I could help them and talk to them in English.

Soldiers brought to Germany to recuperate would visit and tell me stories of Nam horrors and this was no fun for them, often, it made them very upset or I would cry and hold them in my arms.  I came back to America loaded with illegal anti-war stuff collected in France and Germany and because I was being deported from Europe as a troublemaker by the State Department, they screwed up and didn’t pass me through customs at Kennedy Airport because my legal escorts (diplomatic guards) never went through customs, I managed to smuggle an entire TRUNK of revolutionary stuff to Berkeley, California!

HAHAHA.  Right under their noses.  I had to keep a straight face while they took me to my next plane home.  A 17 year old girl can get away with a lot of stuff.

Memories. Back to today, I am an old woman and I think humans learn NOTHING over time.  We are like gerbils on a treadmill wheel going around and around, never making any progress.  US drone kills top Khorasan commander in Syria who was part of an al-Qaeda cell except we created al-Qaeda which was in the beginning a CIA operation as was bin Laden himself!!!

AND WHO WERE WE FIGHTING?  RUSSIA!!!

The wheel needs some grease!  In Afghanistan, no less.  The media never, ever mentions any of this at all.  And all the howling about Russia in distant Afghanistan did what?  It bankrupted Russia.  Then the US went in and our debts climbed and climbed and we are still ‘in’ Afghanistan which is a total mess, we are, like Russia, losing there and what was the entire point of 9/11????

Bin Laden told us!  I listened to him.  He is in hell with the Nazis laughing with them.  Bin Laden’s clever plan, he was one of the Elites just like I am and grew up inside the Machine itself just like me, he said ‘Afghanistan is a TRAP’.  And he sprung the trap on stupid Bush Jr. who is…also an Elite but with a low IQ which was protected so he could go to Yale, the school  my grandaddy went to, for example and which I applied to go to but got sick with the Hong Kong flu in 1968 and ended up very sick for over a year, another long story with that business…

This eternal war of the Elites with each other or versus all humans on earth rages onwards (look at our election choices!) but Putin has broken the chains and the Elites are scared silly of him because he is like Samson, snapping his chains.  Russia to escalate missions in Syria as troops advance on rebels in Aleppo.

Russia plans to escalate missions in Syria to ‘300-a-day’ as troops backed by Moscow’s jets advance on rebel groups in Aleppo.
Syrian ground forces are moving in on Aleppo as Russian jets give support.  Warplanes flattened houses in a strategically important village near Aleppo.

Russia’s jets carry out dozens of missions a day but wants to up this to 300.  Country has been condemned for attacking Western-backed rebel factions.

The Western Factions are…al Qaeda. And others identical or worse.  So why is the ‘west’ supporting these anti-women’s right terrorists????  Syria gave women full civil rights like I enjoy.  NONE of the US/EU/Saudi fighters intend to give any women any civil rights, not even the most basic.  I have zero support for these men.  How dare they???

I am utterly opposed to them all, every single country the US and EU ‘frees’ ends up totally enslaving half of the population and terrorizing many others including neighbors.  This is pure evil.