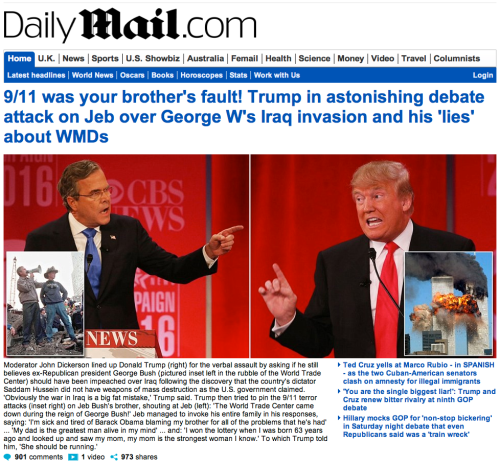 Finally, there is a real debate going on as the candidates go on the attack.  FINALLY, someone points out the Saudi connection to 9/11.  Bush Jr. let only one group of people fly their jets after 9/11: HIS SAUDI BUDDIES!  Right after they attacked us.  I was furious.  I actually saw some of these private jets flying out of NYC, epicenter of the attacks.  I was furious the news didn’t mention this tidbit much and our ruling class never talked about it but now Trump is, bravo!  He will be assassinated for this, of course.  And saying that the illegal invasion of Iraq engineered by the same people covering up the Saudi attack, was illegal: Bravo again, Trump.  Whatever he may be and I dislike him, he is the only GOP candidate telling the truth.  The others are liars and crooks but then, Trump is a crook, too.  But then, who isn’t in government these days?

Here is the Washington Post whining about how Trump dials up personal attacks; S.C. voters will tell us if it worked

Refusing to toe the line of political orthodoxy, Donald Trump tore into one of the most revered families in Republican politics and sent a message that he’s not backing down, no matter how withering the fire becomes.

Going after the Bush crime family!  How dare he!  HAHAHA.  Who Won? Bush and Rubio Bask in Sunny Reviews: the NYT looks at other media conspirators who hate Trump to discover that everyone loves Bush yet again.  Huh?  Up until this last week, Bush’s numbers were single digits.  Now, he is being pushed hard as an amazing person we should all love after he let 9/11 conspirators train in his state, at an airport right near the Bush family secret compound on Jupiter Island.

Battle for the Supreme Court: Obama leads tributes after sudden death of Justice Scalia, 79, and sets up seismic clash with Senate Republicans as he vows to nominate his successor.  Obama is President but Congress is GOP.  I do hope a neutral person is nominated but the chances of that is nil.  The Democrats will choose someone who believes in my civil rights but wants to disarm me and freeze me to death here in upstate NY and the Republicans will want someone who hates my civil rights but believes I should be allowed to continue burning coal since my home is where it is extremely cold during winters.  Gah.  Doomed by the right and doomed by the left.  We need a ‘realist’ party.

Syrian army gains ground around Aleppo, looks to Raqqa thanks to Putin.  The US and Saudi Arabia want to have ‘peace talks’ really fast to stop this surge in fighting which is defeating the terrorists who want to impose Saudi rules on women in Syria who normally live quite modern, free lives under their ‘evil dictator’ like the women of Libya before it was destroyed.

U.S. Secretary of State John Kerry reiterated accusations that Russia was hitting “legitimate opposition groups” and civilians with its bombing campaign in Syria and said Moscow must change its targets to respect the ceasefire deal.

The conflict, reshaped by Russia’s intervention last September, has gone into an even higher gear since the United Nations sought to revive peace talks. These were suspended earlier this month in Geneva before they got off the ground.

The United States urged both Turkey and the Syrian Kurds to step back and focus instead on tackling the “common threat” of Islamic State militants who control large parts of Syria.

NATO ally, Turkey, is bombing the Kurds.  Kerry is OK with this.  This lunatic began by being antiwar when I was antiwar to being a warmonger.  I am still antiwar but I am not anti-save-your-nation-from-terrorists!  And terrorists invaded Syria.  Self-protection is OK.  Of course, the Jews are allowed to kill, build walls, bomb barely-armed civilians in large cities and steal land while imposing one of the most ferocious apartheid regimes since Hitler…and Kerry is perfectly fine with this and demands we fund this for them!

Contradictions like this do not go on forever and ever.  There comes a point where it breaks and Trump, again, unlike Sanders, is breaking this by talking about how it is wrong.  He also talks about how the invasion of Europe is wrong, too and how the European people have a right to defend themselves from invaders.  What a charming idea, one that has our media overlords spitting mad.  Then there was the moment in the debate last night when the two Spanish candidates chattered away in Spanish.  Ahem.

Funniest headline from England today: Vladimir Putin wants to destroy Nato: the Syria war may offer him the chance.  And how is he going to do this horrid thing?  By supporting the anti-Saudi style of radical Muslim oppression, the Russians are winning.  Unlike NATO who supports crushing women and enslaving them.  Sheesh.  And the Democrats bray about how they support my civil rights?  If only they could be consistent here.  I support Putin because he is fighting for my type of rights in Syria.  Unlike the US and EU who have supported the most odious people on earth including their Saudi allies who are extremely noxious.

The quiet rebellion of Conservative England which is very angry about EU policies which have opened the door to disasters.  Same is happening in Germany now, too.  The backlash is beginning.  Contradictions abound which is typical in times of changes.  And back in the good old USA, the hemorrhaging of manufacturing jobs continues:

‘F–k you!” Workers don’t react well to news of 1,400 jobs leaving for Mexico — WARNING, STRONG LANGUAGE: The business announces they are abandoning the US.  Closing everything and moving to Mexico because of free trade makes it cheaper.  The people nearly rioted as he said, ‘This is MERELY a business decision’.  And we will see these people voting for GOP guys who speak Spanish?  Never.

Carrier employees, local businesses reel after announcement of move to Mexico – YouTube: my little town of Berlin, NY, was totally devastated after free trade opened up Pandora’s box.  My sheep which sold for $250 a head went to below $50 a head in one year.  The local grocery store, the bank, the hardware store, the huge green house business, all vanished.  Abandoned houses all over the place, now.

12 responses to “Trumps Talks 9/11, Pisses Off Bush Crime Family, More US Manufacturing Leaves, Scalia Dies, Everyone Fights Over Next Justice”