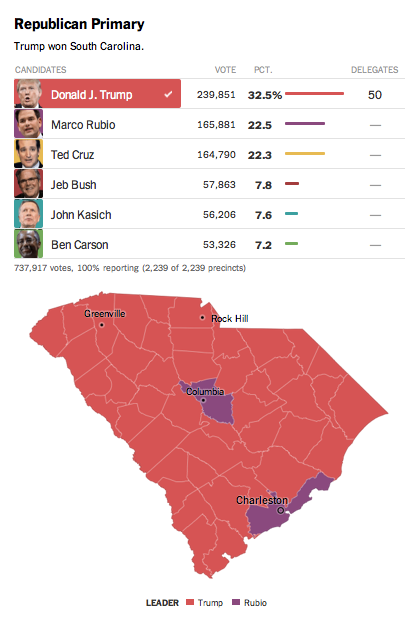 Hillary Clinton is doing a victory dance, having knocked down Sanders with her black voting bloc.  But this also reveals why she is hard to elect.  Black voters are very much a minority vote, nationally, less than 10%.  Ben Carson, who is black, got few votes in his primary but this was due to not being on the Democratic ballot so there were few black voters to support him.  The reality here is, North Carolina is not a great sign for Hillary since 737,917 voted for the GOP primary candidates and only 369,526 voted in the DNC primary which is roughly half as large.  This is no great victory for Hillary because she loses in South Carolina in any probable election.

A quarter of the population of South Carolina is unable to vote due to young age.  The overall population there is roughly 4.5 million people in the state and over 3 million should be able to vote.  In the black community, due to high crime, many males can’t vote which is why Hillary focused nearly entirely on black women when campaigning.  Of the many potential voters in that state, the GOP got less than one third and the DNC got slightly more than 10%.

ELECTIONS 2014: SC voter turnout lowest in decades in the most recent election there.  South Carolina’s Black Voters Turned Out Early En Masse in this primary which means, since 71% of the black voters came to the polls in the MORNING and not in the evening which is how nearly all working people vote, on the way home from work.

Clinton took to the campaign trail with the mothers of Trayvon Martin, Sandra Bland, Jordan Davis, Dontre Hamilton, and Eric Garner. Some voters who remember Clinton’s support of an unjust tough on crime bill in 1994, which led to the over-incarceration of African Americans, believe she has demonstrated a commitment to criminal justice reform.

Nearly all the cases which these sons died, were either very murky or the sons were armed and quite dangerous when they were finally brought down by the police.  This is true of many ‘heroes’ embraced by people, they overlook the reality and romanticize the individuals.  What the black community wants now is chaos.  The social chaos eating up the black community which is harming them greatly, is increasing, not decreasing.  The flood of illegal aliens displaced many, many black potential jobs yet the DNC supports illegal immigration when in places overrun by these such as say, California.

The illegal alien/black power matrix the DNC is exploiting in primaries dooms the party to national defeat so after the primaries, the DNC will run away from all the promises and speeches made during the primaries which the media owners who are all Zionists and who really control the conversation, will attack Trump endlessly hoping to undo this primary mess which reveals how little choice the Democrats had in this primary election.

Herding all the white voters into the DNC camp will be very, very difficult.  Our media owners love to tell us that we are being swamped by foreigners who are not Europeans and therefore, we must resign ourselves to being eliminated.  For example, 50% of the US is Protestant or no religion.  Yet the majority of the Supreme Court is Catholic and the entire court is only Catholic/Jewish.  0% representation of 50% of the people.  This is NEVER discussed by our media bosses.  It is kept buried, in DC, no politician even in the GOP discusses this.

Here is an astonishing analysis about this severe problem:  A Supreme Court without Protestants? – CNN.com

“It’s an amazing irony, given how central Protestantism has been to American culture,” said Stephen Prothero, a religion scholar at Boston University. “For most of the 19th century, Protestants were trying to turn America into their own heaven on Earth, which included keeping Jews and Catholics from virtually all positions of power.”

Many religion scholars attribute the decline of Protestant representation on the high court to the breakdown of a mainline Protestant identity and to the absence of a strong tradition of lawyering among evangelical Protestants.

“Mainline Protestantism isn’t a pressure group,” said Prothero, “It’s not like the National Council of Churches is lobbying Obama to get a Lutheran appointed to the Supreme Court.”

And while Judaism and Catholicism have their own sets of religious laws that date back millennia, many branches of Protestant Christianity do not.

So, how did the Jews get 30% representation and the Catholics, 70% of the Supreme Court?  LOBBYING?  With what, pray tell?  This is the underlying corruption in our system that is screaming for attention.  As for two assertions by the CNN gang, one about how Protestants, who wrote the Constitution and created this system, are incapable of doing this due to their religion and the other, how Protestantism has existed only since 1500…ahem, which is when it started, and therefore, is weak and unable to write laws…this propaganda is designed to defy Protestants and put them down even though they are the majority and have zero representation in the top court thanks to corruption in DC.

Black women are mainly Protestant.  There is a significant Catholic black community.  But like in the white community, half or more are not Catholics or Jews or Hindu or whatever.  The mainstream media Jews, terrified of Trump who is loud about how Protestants have little representation, have put up against him two Catholics, one born in Canada and the other a first generation citizen from Cuba.  The media hopes one of these two will stop Trump while Protestant candidates are ignored.  The hope is, these two newcomers will be servants of our rulers, and they will save this system set up by our rulers, namely, free trade and eternal war with Russia.

The CNN article then goes on to talk about evangelical Protestants and snidely says they are all inferior.  But it doesn’t mention that most of the ‘Protestant’ part of the population is NOT ‘evangelical’ at all and yet they get absolutely no representation at all.  This is a real problem for our country that runs along the same rails as the low voter involvement.  When less than a third of potential voters show up in a very contentious primary, this is bad.

This disassociation from politics is not a good thing.  A crisis can bubble up from below despite all attempts at suppression which we see in Europe already thanks to the rulers there letting millions of hostile foreign males invade and terrorize voters who are now heading towards right wing parties.  What is particularly funny is, Israel has gone very far fascist/rightwing/socialism of the Nazi type with all the media owners applauding this and applauding segregation of very severe sort…while at the same time demanding the opposite in Europe and the US.

And ALL the candidates including the ‘socialist’ Sanders are the same, they all support Jewish Naziism politics in the Middle East.  One cannot hold opposite political affiliations at the same time, this leads to collapse or explosions over time.