For Those Watching the Sea Surface Temperature Anomalies of the Equatorial Pacific and the Decay of the El Niño | Watts Up With That? It is now totally obvious that we are heading straight into a powerful la Nina event.  Today, NOAA changed their forecast for the future.  They still have this summer super hot and they listed this last month as super warm for where I live in Upstate NY which was really a chilly, cold April, my poor daffodils were ravaged by cold, buds are finally forming on the trees only it will be 29 degrees F Wednesday and snowing all over the Western US, too.  Grrr…still, NOAA thinks summer will be hot and I think it won’t be hot at all.  Time to talk about la Nina who is knocking at the door already.

By the by, the NOAA website that does future predictions of rain and temperature athttp://www.cpc.ncep.noaa.gov/products/predictions//multi_season/13_seasonal_outlooks/color/churchill.php has completely changed their predictions from just two weeks ago.

Back then, they had maps showing the US being super duper warm all year long except for a very tiny part of it and now, suddenly, they show nearly the entire northern tier colder than normal starting next fall and all the way through the rest of the year.

This change is due to the collapse of the present el Nino and they know that the la Nina will be cold and last a year or so.

I went to the NOAA climate change page to see what is the latest research and news and…it all stops at 2009.  Nothing since!  How bizarre considering that our President is flying all over the planet with his entourage to talk about how flying jets and living in huge houses like the White House or the Vatican, is totally evil and should stop, now!

This research revealed that El Niño events that persist into boreal spring, such as in 2015-16, are associated with a relatively mild risk of tornado outbreaks over most of the country, except along the Gulf Coast and central Florida in February. In contrast, weak early-terminating El Niño events tend to boost the likelihood of tornado outbreaks in the Upper Midwest by up to 50% in May.

So far, not too many tornadoes but then, this is a peculiar year for weather.  For example, we had a late winter but a late spring, too.  Speak of the devil, here is a screen shot from today showing what is hitting the desert Southwest very hard: a COLD front! 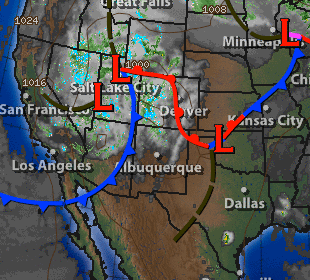