Google slammed for removing Palestine from its maps – Middle East Monitor: this isn’t in USA news because we live in this lovely bubble that eliminates news our rulers don’t want us to see.  One key place our rulers control with an iron fist is Palestine.  I have often visited Google earth to snoop around and hadn’t looked at the Middle East in two months so here it is: yes, they did remove all names of Palestine from the Jewish maps we get to use.  Lovely.  And a crime.

The Palestinian Journalists’ Forum has denounced Google for deleting the name of Palestine from its maps and replacing it with Israel.

In a statement released yesterday, the forum said Google’s decision to remove Palestine from its maps on 25 July “is part of the Israeli scheme to establish its name as a legitimate state for generations to come and abolish Palestine once and for all.”

“The move is also designed to falsify history, geography as well as the Palestinian people’s right to their homeland, and a failed attempt to tamper with the memory of Palestinians and Arabs as well as the world.”

Now they have this new thing saying in very tiny letters, ‘1949 Armistice Agreement Line’ and ‘1950 Armistice Agreement Line’.  They still allow the word ‘Gaza’ to show up and if you google ‘Palestine’ it takes you to the correct part of the planet but no name shows up with looks stupid and is very annoying and this is totally a political trick pulled off by Zionists who control a number of key elements of our society and businesses and use these ruthlessly to oppress the Palestinian people.

Google earth operates very oddly in Israel.  For example, all the Jewish communities show up and NONE of the Palestinian areas show up.  That is, if you click on the yellow figure icon and the map lights up in blue, only Jewish places show up.  Every single Muslim town is off the map.  All of Gaza and the entire West Bank is hidden from view, totally and utterly.

Like all Palestinian locations, Google leaves out the name in the little black box and where the arrows are but we can see from this how Jews hog the Wailing Wall for Jewish males on one side and females/other Jews on the other side of these barriers and there is a secondary wall for Muslims and other sub-humans like tourists or anyone else who comes there somehow. 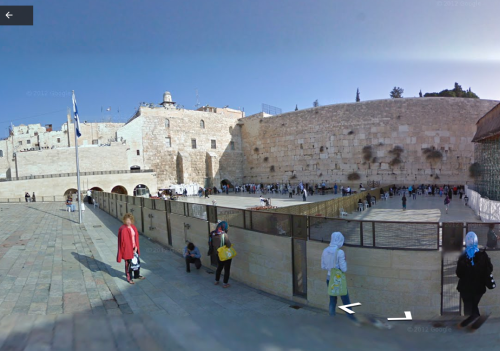 Below, we see suddenly identifying information on the screen shots I took!

Here is another odd item: when I went to a street that is illegal in Palestine, one of the colonies put up by Jews, the street names are in Hebrew.  But go to Israel itself, the streets are all in English! 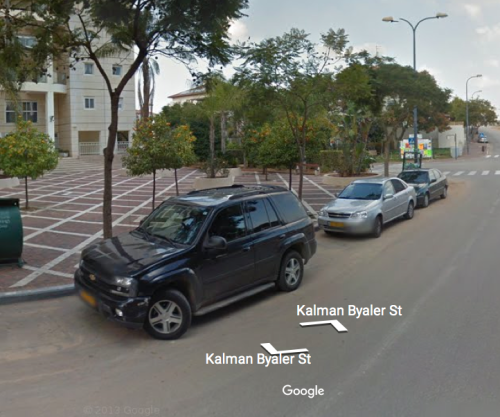 Google does this for political reasons, it is a classic ‘wipe out history and people’s names’ business which the Nazis believed in, themselves.  They, too, changed maps to erase names of people and places they wanted to eliminate. One last map: these are the many illegal Jews-only ‘settlements’ on the now-no-name West Bank Palestine and NO NAMES on any streets except three or four major roads!  Completely no names, no street views, nothing.

10 responses to “Overseas News Hidden In USA: Google Eliminated Palestine From All Maps”