Ford is moving ALL of its small car production from US to Mexico      Mexico wants to build a border wall with Central America to keep out illegal immigrants  who are violent and bringing chaos…HAHAHA.  And all this news tracks into the chaos, despair, sexploitation of our children who, especially the lower class, welfare children who are popped out to get money for their mothers and then thrown into the bin as ‘useless’ unless they can bring in loot via crime…Our major manufacturing cities are dying or dead.  They no longer make much of anything except crime and depravity.  They are hell holes for holding unwanted populations and sporadically set on fire and looted.  And the DNC, Hillary/Obama solution has been to unleash these hellions by not having any controls on them at all.

First, look at this darling cartoon showing sweet teacher and happy, integrated students.  Could be ‘real’ since there is only one black child and in settings like this, black children do quite well, so long as there is someone who can enforce discipline on the other side of the door.  By high school, all the children except Asian ones, in this cartoon are verging on total out of control behavior these days.

Already, defiant students can’t be disciplined by teachers anymore and so classes are disrupted and the halls are filled with violence and crime and the most dangerous place any sane person can go is inside our schools in major cities especially black schools which are utterly out of control now.  Concern about all this is very real but the Democratic solution is…De Blasio changes school metal detection, suspension rules so you can’t suspend violent students and they can bring weapons to school!

True story: I moved out of NYC due to this one event.  My 2nd grade daughter was assaulted in the classroom.  She ran out of the school and called me from a pay phone.  I went to her school and entered the classroom to see a completely out of control riot going on with the black students throwing things, screaming and turning over desks.

The teacher was at her desk, crying.  I stormed into the room, the children, all of whom knew who I was, went utterly silent for the Housewife from Hell was in the room now.  I pointed to various children and told them they were naughty, doing this.  I then went to the Principal to tell him what was going on.  ‘Come with me NOW,’ I said.

He said in great anger, ‘How dare you tell me to go now, I’m BUSY.’  I said, ‘Give me the phone, I am calling the Daily News and tell them to come now.’

The threat worked, he went with me, pissed off like a naughty child, saw the mess, and then tried to fix things and…failed, of course.  The entire system failed.  I was one of the founders of Save Our Schools back in 1981 and I gave up and moved away and so did all the members of our group.  We fled.  We knew our children’s safety and sanity depended on fleeing NYC.  Today, the public schools are all resegregated and blacks are angry about this but it is their own fault, no one can go to school dominated by black children, it is impossible.

De Blasio’s plans were met by strong opposition from the teachers union, the principals union and the school safety agents union.

But the mayor, who announced the new policies Thursday while on vacation in Italy, insisted they were for the best.
Local 237 President Gregory Floyd, whose union represents school safety agents, said any change to remove scanners from public schools would threaten student safety…

The city on Thursday also published data on the use of restraints — such as handcuffs — in the public schools for the first time, showing that students were restrained 673 times from January to March.

Good lord, so many in handcuffs.  Why not use chain gangs in school?  Chain them to the desks or each other and whip them when they don’t behave.  We might salvage something from this hellish mess.  I will note that all the creeps screaming about global warming also love to take lots of vacations flying in jets, etc. all over the planet earth.  Hypocrisy is rising like the oceans that are not rising.

NONE of these creepy people send ANY of their children to black city schools.  Obama certainly did not!  I can’t think of any who have and this has gone on and on and on for the last 40 years!  No honest conversation about our deteriorating schools and the savage, wild behavior of the children has happened on the left.  The left is happy that chaos is churning everything.  Defy authority, everyone!  And when the far left takes over, we get Stalin, Mao and other creepy people who impose all sorts of crummy rules on everyone.

The brawl kicked off in the cafeteria at Crotona International High School in the Grace Dodge High School building on Crotona Ave. at around 11 a.m., according to school safety agents stationed there.

Eight students involved in the fight were taken into custody at the 48th Precinct. The students have not been charged…
“Nothing is more important than the safety of all students,” Holness said.

That’s in Queens.  I remember when parents fled to Queens to avoid black students in schools.  We used to have staff in schools maintain order.  Now we have to have armed cops all over the place because it is as violent as a prison.  Here is a typical example from You Tube:  Oklahoma City high school brawl breaks out after volleyball game | Daily Mail Online and my link to the You Tube channel is via Europe, not the US news: 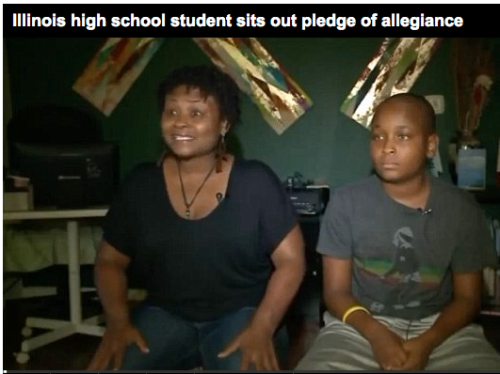 Stern measures are being applied across the country to…TEACHERS.  They are punished for any attempts at discipline.  Blue Island teacher disciplined for forcing student to stand up for the pledge of allegiance | Daily Mail Online

A teacher has been disciplined for trying to force a student who said ‘America sucks’ to stand during the pledge of allegiance.

Michelle Alfano, 53, was punished after telling 15-year-old Shemar Cooper to get out of his seat at Eisenhower High School on Blue Island, Illinois, during the recital at the beginning of a Spanish class last week.

The teenager quickly apologized for his remarks, but refused to say sorry for staying seated.

The preachers are obnoxious but the students are violent, out of control, vicious and use endless obscenities.  They sound like a brawl in a biker bar, not a school.  I was stunned when I did a You Tube search ‘high school students riot’ and this came up: a list of You Tube sex stuff published by young women whose parents probably don’t know they are flashing their tushes on You Tube: 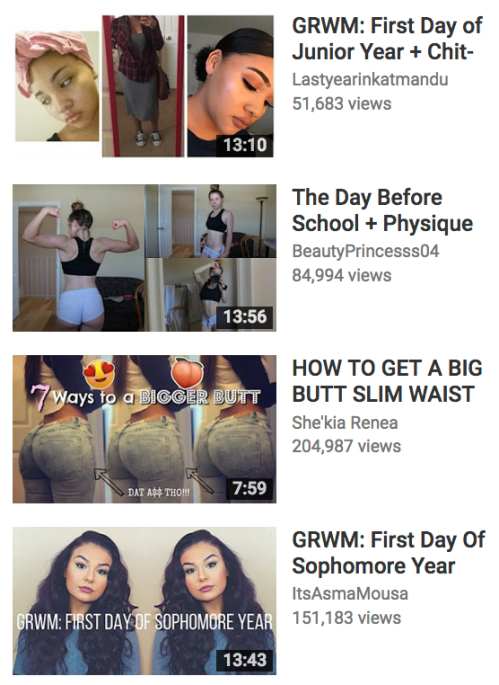 And yes, if girls want to dress as strippers, now it is OK.  Any attempts at stopping this will be greeted with riots.  Then the feminists will complain about men raping and killing young females.  I was a young hippie female but…I had this school persona called ‘Auntie Hattie’ whereby I would dress in 1900 clothes from a second hand store with this battered hat and I would go around the school chiding fellow female students for wearing miniskirts.  I never wore miniskirts.

The Dean of women came to me and said, ‘You can’t do that.’  I said, ‘Madame, do you realize you are not only showing your ankles, you are showing your knees, too!’  She actually laughed at that and didn’t punish me.  On the other hand, rape went through the roof starting that year, 1965.  We had to deal with a lot of chaos.  The crime rate today isn’t where it ended up by 1980 when I began running street patrols.  The collapse of policing was profound back then and I see it getting worse today if all this nonsense isn’t stopped.

Instead, we have our rulers decimating the remaining ‘lower working class jobs that paid well’ and our cities turned into out of control, very expensive hell holes…and the solution is what?  What???  Stopping free trade is step #1.