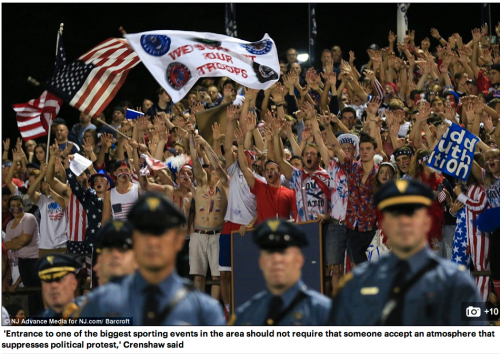 Innocent parade or ‘frightening’ show of force to ‘intimidate and ostracize’? Black groups complain about ‘aggressive’ service honoring police at high school football game amid anthem protests: Police ceremony at high school football game causes outrage among black groups | Daily Mail Online in England reports.  Not only have black radicals decided to attack the entire concept of patriotism, they are on the warpath to start a race war all because they don’t want police patrols in dying cities where the bulk of the black population is spiraling into self destruction as they are cast off as potential ‘labor pool’ populations.

As someone who worked hard to pull black men out of prison and out of a life of crime and self-destruction, I am just horrified at what is happening now.  When the left cheered black football players who decided to show disrespect to the National Anthem, I knew we were on a road to destruction because it further isolates blacks from the major population.

Standing shoulder to shoulder with illegal aliens demanding to not learn English or integrate is another vast, terrible mistake on the left, too.  These events are a serious problem which I argued about with the left way, way back in the 1960s, 1968, to be exact.

I warned everyone that burning the US flag and showing disrespect to soldiers was stupid and dangerous and self-destructive.  I was kicked out of the movement for this wise advice.  I then went into helping returning soldiers to feel at home again and get mental health care for their suffering and helped them in many ways. The antiwar movement died out after the draft was ended and we had the mercenary army which I warned about because it meant endless wars on our dime with no say and guess what?

This is happening today!  Back to my top linked story today about the left doing the ‘shame on you’ game with patriotic American citizens:

‘According to press reports, however, the event is being used to intimidate and ostracize people who express their views about systemic racism and social just.

‘Law enforcement officers are sworn to protect the constitution, and it is a disservice to the students and players that an event that should focus on them, their families, and their communities is being used to send a message that people who express concerns about disparities in the criminal justice system are unwelcome, disloyal or unpatriotic,’ the ACLU wrote in a letter to the district.

So, waving the flag and making speeches honoring US military and police is to be forbidden from now on?  This event happened near where I used to live in New Jersey.  New Jersey is like all other US states: black run cities have terrible schools and high crime and whites flee blacks whenever it is possible.

Screaming ‘racists!’ at the backs of retreating white parents fleeing bad schools isn’t stopping white flight.  Mugging white people and killing them and breaking into their homes isn’t stopping white flight.  Whites are fleeing for a very good reason: black culture is collapsing into this hellish hole of self-destruction that is leading the destruction of black society and this is causing problems with neighbors who have to deal with this destructive nihilism.

The media, anxious about this election being about issues outside of a man’s penis in his pants, has to smear Trump as much as possible and egg him into personal fights (if I was his advisor, I would have told him to totally ignore all this sex stuff and talk only about issues but he hates me so this is his headache) and he fell for it lock, stock and barrel.

But the danger zone here is, white patriotism is under attack from people who hate our country and this is highly explosive, and if Hillary is President, she will feed this fire of fury further because she is in a classic position, literally: ancient Rome.

You see, ancient Rome’s population became dependent on the State for food and fuel and housing so they stopped working due also to slavery.  As things deteriorated, the elites brought in more and more barbarians to do the labor who then took over and so forth.  End of empire, victory for barbarians and I am 100% the descendent of these same barbarians, the worst and most dangerous of the lot of them.

Brewing under the radar and mostly showing up overseas or next door, like the above story, is this dangerous story:  Trump supporters furious his PTSD message was twisted to pursue ‘political agenda’ | Toronto Star

Trump, speaking to a group of veterans in Reston, Va., was asked whether he would support boosting the roles of chaplains and faith-based programs to promote mental resiliency among service members and veterans. He indicated he would, and then shifted quickly to opine on problems he sees in the care veterans receive.

A typical day for normal politicians who, in the past, would cater to the military and not disrespect them or attack them or send them into battle while making fun of them…

“When you talk about the mental health problems, when people come back from war and combat and they see things that maybe a lot of the folks in this room have seen many times over and you’re strong and you can handle it,” Trump said. “But a lot of people can’t handle it. And they see horror stories. They see events that you couldn’t see in a movie, nobody would believe it.”

The comments were greeted by critics as clumsy at best, and offensive at worst. Phillip Carter, an Army veteran who previously served in the Obama administration, tweeted that they were “uncaring, unprofessional and unpresidential,” and pointed to some of Trump’s previous controversial comments about veterans, including criticizing the parents of Army Capt. Humayun Khan, a Muslim soldier who was killed in Iraq.

The key to this paragraph are the words ‘worked for Obama in the White House.’  He is a tool.  He does not represent the feelings of anyone else in this matter.

But Trump’s supporters who have served quickly said his remarks were being exaggerated for effect in the media. Former Marine Staff Sgt. Chad Robichaux, a combat veteran who served in Force Reconnaissance units and asked Trump the question, defended him in a statement released to news organizations.

“I think it’s sickening that anyone would twist Mr. Trump’s comments to me in order to pursue a political agenda,” said Robichaux, who was diagnosed with post-traumatic stress. “I took his comments to be thoughtful and understanding of the struggles many veterans have, and I believe he is committed to helping them.”

I am happy the Canadian press took the trouble to ask the man who asked Trump the question that day, for his opinion.  This election is key to what ails our country today.  Patriotism today is now anathema.  It is being systematically killed.  The Bilderberg gang wants no borders.  They also don’t want strong families in the cities like Ancient Rome.

They promote and protect their own families no matter what and make them as rich and cut off from the masses in the seething cities, hiding themselves on huge estates run by slaves or low wage foreign labor which is basically similar so I am calling them ‘slaves’ here because the social gulf between our liberal rulers who claim they love humanity and how they treat humans is gigantic.

Meanwhile, Hillary supporters run wild and are not punished by the press for being stupid:  Crusaders in Lululemon! HUNDREDS of yoga-pant loving women march on man’s Rhode Island home after he writes scathing letter claiming they look ‘disturbing’ on women over 20

The column specifically targeted older women, with Sorrentino writing that yoga pants ‘do nothing to compliment a woman over 20 years old…’Do yourself a favor, grow up and stop wearing them in public,’ he added. ‘I struggle with my own physicality as I age. I don’t want to struggle with yours.’

Women at the protest argued that it wasn’t just about Sorrentino, but also the anger they feel at being constantly told what to wear.

The group help up posters that read ‘Love Yourself’ and ‘We Wear What We Want’ as they walked by Sorrentino’s house.  Sorrentino, who claims he has received death threats, said before the parade began that it was ‘vicious and intimating’ and should not be allowed to happen.

But the women argued they were well within their rights to stage the peaceful protest, which they said was meant to bring the community together.

Ugly is as ugly does.  So, the females don’t want men to think they are ugly but they also want to be ugly because…well, perish the thought.  If a gang of patriots were to go to someone’s private home to intimidate him and harass him for writing about supporting the disrespect the flag movement, you can bet the liberals on the left would howl with rage.

Katy Perry strips NAKED in new clip urging fans to vote at US polling stations …Miley Cyrus, Katy Perry Campaign For Hillary In College Dorms by dressing down nearly totally nude…and this is their theme: let’s go naked and then howl at men for looking at us?  HAHAHA.  Gads.  Free love and sex but if you touch me, I will go hysterical?  HAHAHA.  What a pile of entrails in the sun surrounded by vultures.

Meanwhile, in the real world where people are being butchered:  US Strike Kills Civilians at Iraq Funeral Procession while  Saudi Warplanes Pound Yemen Capital as Ceasefire Ends.  Thanks for the party, too bad it ended in total nuclear annihilation.

One last story: California Soldiers Forced to Repay Enlistment Bonuses because Bush and Cheney and Hillary voted for this war, too, needed soldiers for the illegal invasion of Iraq.  To get these mercenary soldiers, they offered them bonuses and goodies often to the tune of nearly $20,000 each.

Now, they don’t need them so much because robots and drones are being used to bomb people instead not to mention hiring al Qaeda to fight the Russians…AGAIN…like in 1987…I shudder thinking about how this ends…the government is retroactively taking back these bonuses today.

To the tune of $22 million spend on the program.  What?  The rage of the people going through this after going back into hell holes for no good reasons in the first place, is very high but many of them are suicidal instead which takes me back to the Vietnam War years.

The biggest mental health problems I saw was suicidal thinking due to what happened in Vietnam.  It was very hard on the soldiers while Nixon and LBJ got to retire to fine homes and ponder their war crimes by ignoring them.  If there is a hell in the afterlife, they are certainly there.