From the Washington Post: Obama is letting an INCREASE of 15% illegal aliens crossing the borders illegally.  This President has chosen to sabotoge our nation if the DNC can’t rule us all.  Secondly, the story about virtually the only case of a Trump supporter hitting a Hillary supporter at a Trump rally as the black guy was trying to disrupt Trump’s speech, this white elderly man has been punished for this and the Washington Post howls about this while not mentioning the many, many instances of Hispanic and black rioters attacking Trump rallies very violently. 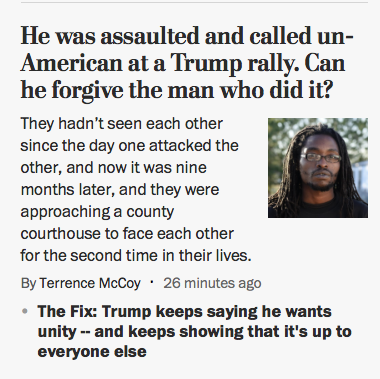 From the Washington Post.  Unlike all the NYT articles, this piece of Fake News has only one reporter, not three or five.  At least the Post won’t go bankrupt as fast.

The article goes on and on and on trying to pretend to be about how charming and nice the black young man who deliberately disrupted a Trump rally because he hates Trump voters.  The very old man is illustrated as this evil, bitter man who deserved a year probation and $1,000 fine.

(At the Trump rally which Jones, the black kid, planned to disrupt) McGraw sat in the front row, and Jones found an open seat in the back. The last time they saw each other, McGraw was elbowing Jones in the face at a Donald Trump rally, one of the first moments of violence in what would become a historically contentious presidential campaign.

Instead, he was elbowed and fell which is quite different from being say, punched in the face.  By making this event more violent in their chatter, illustrates how the Hillary voters have made themselves very unpleasant to deal with, very violent and yet touchy, whiners.

After Jones was pulled up from the ground by county sheriffs and escorted out of the coliseum and the rally was over, McGraw went even further. “We don’t know if he’s ISIS. We don’t know who he is,” he said. “The next time we see him, we might have to kill him.”

People are nervous.  Any day, we expect assassins to attack.  Many, many Democrats threatened to kill Trump one way or another.  Rich people and famous people threatened Trump this way.  It was amazing to watch.

The rich and famous have stopped threatening Trump only because they know very well, they can be arrested and should be arrested.  But they are 100% responsible for the fear and freaking out because they pushed hard to do the violent solution to this election.

Five days before the hearing, Jones was cradling a phone against his ear and typing another pizza order into a computer. “Rakeem!” his manager yelled as two pizzas were slid into a carry case and placed beside him at the front counter. “You’re out!”

Working the counter, he makes $7.35 an hour. On deliveries, it goes down to $4.25 an hour, but there’s always the chance for a big tip, and he hustled the pizzas to a faded Mitsubishi sedan with a cracked windshield. He’d bought it earlier in 2016 for $1,600 — most of his savings — when McGraw’s attack at the Trump rally left him feeling unsafe riding the city bus.

A minority male who is young and strong was scared of an elderly white man?  What?  I see a guy making up stuff for the naive reporter justifying stuff.

What if McGraw was serious about killing him? Considering the way the election had gone, what if a white-supremacist group decided to try something?

This is now ridiculous.  Across the US, the rampaging mobs, the 13% of the population doing 50% of the murders and nearly the same level of all crimes are black people especially young black males.

Where he comes from, a rough neighborhood in northwest Fayetteville, threats are sometimes carried out. A few of his friends were murdered when he was younger, and two years before, someone shot up his aunt’s trailer, killing his 3-year-old cousin sleeping inside.

Note how the Washington Post liar doesn’t mention that these are murders done by young black males.  The threats that are carried out are black gangs.  His murdered friends were probably drug dealers on the streets.

So in the days after the rally, he quit his job after the company’s name was published, stopped taking the bus, bought a car and found a new job in a different part of town delivering pizzas.

He was worried about getting in trouble.

There was a time when he thought differently, not just about Fayetteville but about America as well. He knew there were racists in his country and community, but he also trusted that its people were tolerant of diversity and wouldn’t vilify someone who went to a Trump rally and yelled out some words of protest. But since that night, he has thought about race constantly.

These lies are typical: the young black male went to the Trump rally WITHOUT FEAR because he planned to make himself very loud, very obnoxious and expected to GET AWAY WITH IT.  The shock for him was to have an elderly  man trip him up.

The reporter visits the elderly man:

At times he has looked at the belts (he makes belts) that some people wear, noticing the cheap buckles, the fraying ends, the fake leather, and wondered how someone could buy a belt like that. And lately, it has not just been that question, but a lot of questions he has been having about the changes in the country. Gay marriage. How is that now legal? Baltimore and Ferguson. How could people burn down those buildings and shut down the roads? A Trump rally. How could someone think it was okay to shout obscenities and boo a man running for ­president? Decency. What happened to decency? And on the night of March 9, when he saw Jones shouting at Trump and others, he got up from his chair as Jones was passing, threw an elbow, and now he was regretting it not only because he was arrested the next day, but because the other person acting indecently was him.

He ELBOWED this young man.  And was punished pretty severely for this.

The sentence McGraw received was one year probation, and after the judge was done and the case was over, McGraw had one more thing to say to Jones. “We’ve got to stick together,” he quietly told Jones. “We can’t let them come between us.” Then he walked toward a side exit and put on his cowboy hat, and Jones went in another direction, toward a friend who had been with him the night of the rally.

He apologized to the young man who wanted to diss everyone at the rally and show off.

“It was a slap in the face, man,” the friend, Ronnie Rouse, told Jones. “What messed me up here was the guy didn’t apologize.”

“If it was me? Ninety days, five-year probation, $1,000 fine. It’s crazy,” Rouse said, and a few minutes later, standing outside with Jones, he looked back at the courthouse. “He really believes in how he acted. He’s just a stubborn old man.”

These jerks wanted the elderly man go to prison.

I see a bad end to all this.  Jones was told by fellow black young buck males that he was cheated and they all want worse things to happen.  8 years of Obama has gotten them all into this frame of mind that the Republican Senate, Republican House and Republican President and soon, the Republican Supreme Court will cuddle them and let them run riot and allow them to do as they all please.

These days are now over.  I want civility and self control and respecting people’s property and lower crime rates.  And Obama brought disorder, riots and rising murder rates in cities which have large black populations.  This dire situation is sad to see.  And the pendulum of history is now swinging to the opposite side. 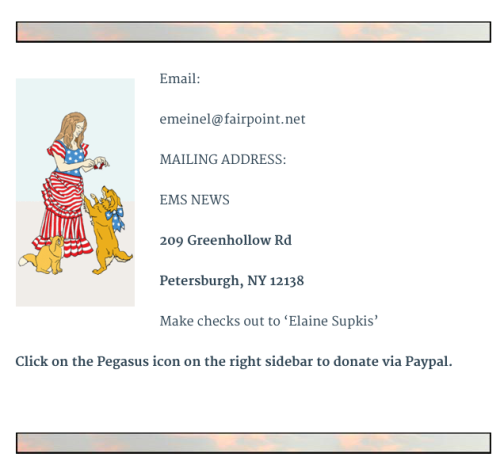