I suspect Hillary would have gotten an even less enthusiastic military presence.  And police: at least as bad as Obama who went out of his way to diss cops.

The pearl clutching crew at the Washington Post continue nonstop attacks on the incoming President:  Rep. John Lewis, a Democratic congressman from Georgia and civil-rights icon, told NBC’s Chuck Todd in an interview for Sunday’s “Meet the Press” that he believes Russia’s alleged hacking aimed at helping Trump in the 2016 race makes Trump an illegitimate president.  Lewis is a black politician who was a civil rights activist and who now sits on his rear doing nothing to stop the tsunami of black youth crime and the WP and NBC help him in this lazy quest by lying about what is destroying black communities across the entire nation.

Chicago, this week, blacks riot and cops are helpless IN POLICE HEADQUARTERS!

He added: “I think the Russians participated in helping this man get elected, and they helped destroy the candidacy of Hillary Clinton.” Lewis called it a “conspiracy” and added: “That’s not right. That’s not fair. That’s not the open democratic process.”

Lewis added that he won’t attend Trump’s inauguration, which he said is unprecedented in his 30-year congressional career.

Anyone can do this, not participate in something.  But of course, if white politicians said any of this, the US Fake Media would go on the attack whereas when black people do this, it is OK or even, we are to be sympathetic.  These poor losers refuse to look at why they lost this election.  Pretending it was ‘stolen’ is key to not understanding the fury that is rising due to black crime.  It has spread everywhere during the Obama years.

It is nearly invisible to the media but very visible to anyone else as black teens riot at pools, schools, county fairs, races, neighborhood picnics, Easter egg events, whatever, these mobs go crazy.  Trump responded to this Congressman and I would, personally, advise him to not do this but I am not him and he can do as he pleases:

I decided to examine some of the crime issues in Georgia and compare it to Iowa and to look at who is committing crimes in both places.  Even Iowa which has a very low black population has plenty of crime…nearly all in the black enclaves in to cities there.  Georgia has it all over the place.  First, back to the article above:

Members of the Congressional Black Caucus were particularly incensed by Trump’s long-running questioning of the legitimacy of the first black president, saying it amounted to bigotry and a racial dog-whistle. After Trump finally admitted Obama was born in the United States in September 2016, members of the CBC held a press conference to denounce Trump.

The Fake News people, instead of rigorously investigating this, have ignored it and Obama pretends he didn’t break the law by producing a fake birth certificate and yet another illegality has flown under the media radar and it is as if we live in two worlds: the pretend world and harsh reality.

Crime in this district is triple the state rate.  It is 50% black. 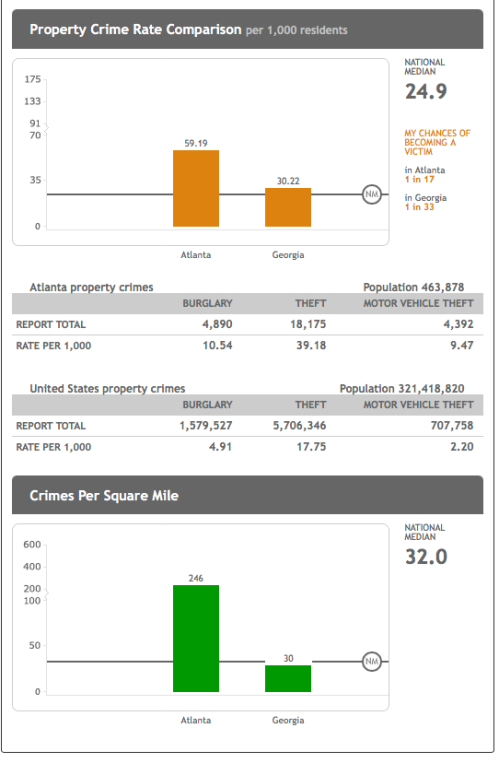 Property crime is eight times higher than the rest of the state meaning, lots of crooks are cruising around.

This video shows some skulkers robbing a house but the owner came home so they attacked and mugged the victim, too but didn’t murder the poor homeowner.  How charming.  Did Trump cause this?  Now on to Omaha to compare Georgia’s Atlanta statistics:

Everything is half as bad as Georgia. Georgia is near the bottom of the barrel with a crime index of 2 while Omaha is 10 which is still 90 below the ‘safest cities’ but this is due to the same problem: black crime even in Omaha where the majority of crime is in black sectors. 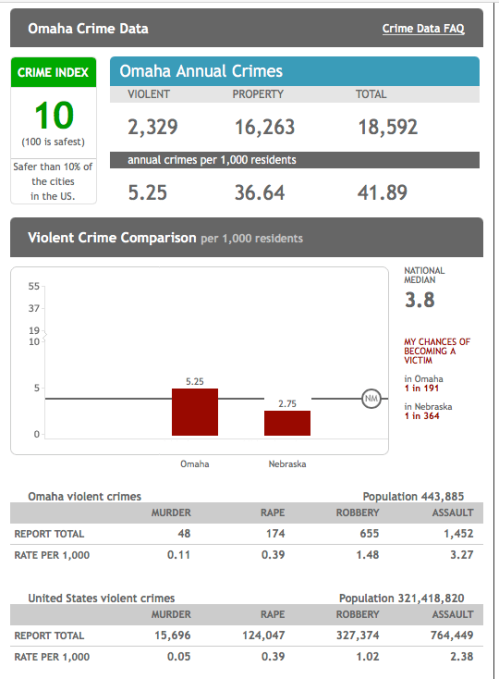 Even at a ’10’ the crime stats are half of Atlanta’s rates.

Now that Trump and Congressman Lewis are discussing black crime and how to face reality, here is a news article which is full of crazy Fake Media stuff talking about all this in a fake way, from 2014:  Omaha, Nebraska: The Most Dangerous Place In America To Be Black.

Murder rates in the United States continue to plunge to historic lows — even the blood-soaked streets of Chicago recorded a 16 percent drop in homicides last year, with the city recording its fewest killings since 1965.

Still, for uncounted African-Americans, the carnage persists in deprived neighborhoods across the country. While news of gang killings and other forms of mayhem in the grim streets of Philadelphia, Chicago, New Orleans, Oakland, Calif. and other metropolises dominate headlines, the city with the highest incidence of black murder victims might raise some eyebrows: the seemingly peaceful, farming state of Nebraska’s largest city, Omaha, a city of 420,000, located along the banks of the Missouri River.

Omaha (and particularly its black neighborhoods in the deprived northern and northeastern parts of the city) accounted for almost half of all recorded homicides in Nebraska — which, overall, sported a relatively low murder rate of less than four per 100,000 people. (The U.S. as a whole has a murder rate of 4.44 per 100,000 people.) Ninety percent of these murders came from the bullet of a gun.

The data further revealed that two black homicide victims from that year were children (less than 18 years old), while the average age of the victim was 28. The violence has continued into 2014 — as if to illustrate the parade of killings that have ensnared parts of Omaha, on Jan. 15, a 5-year-old black girl named Payton Benson was gunned down by a stray bullet. “Gun violence is a public health crisis that touches all Americans, but the impact on African-Americans is especially devastating,” said VPC executive director Josh Sugarmann. “This report should be a wake-up call for our elected officials to address the disproportionately high homicide victimization rate among black men and women. The longer we wait to act, the more lives will be lost.”

So, who is killing black people?  The article here DOES NOT SAY.  It acts as if this were something mysterious. It is not, of course.

On an absolute basis, the homicide numbers for Omaha are dwarfed by murder data from places like Chicago and Detroit, since Nebraska has a small population. With about 1.9 million people in the entire state (about two-thirds the size of Chicago), Nebraska is overwhelmingly white. About 88,000 black people reside in Nebraska, accounting for only about 4.8 percent of the state’s populace. The black community is concentrated in Omaha, and to a lesser extent, in the capital city of Lincoln, about 50 miles to the southwest, according to the 2012 U.S. Census.

Omaha police chief Todd Schmaderer has responded to the crisis by restructuring his department and assigning more officers to specific gangs. “It’s Vietnam around this block,” Larry Davis, a 50-year-old north Omaha resident, told the Omaha World-Herald newspaper in 2012. “These young guys with these guns, they just don’t have a value for life.” Quite obviously, the prosperity that the rest of Omaha enjoys has completely bypassed the northern parts of the city, which is scarred by hundreds of condemned properties, among other woes.

At no point does anyone hint as to who ‘these young people’ are and none question why these violent people are ravaging even ‘white bread’ states like Iowa.  All places where welfare/out of work black populations live, the same results exist, that is tremendous crime rates, arson and abandoned, run down houses.

All the places also co-incide with places that once were very productive and now are abandoned to mobs of criminals thanks entirely to ‘free trade’ foisted on us all by our rulers who are in total warfare with Trump because he might reverse these terrible social and political forces.

I have a lot of ‘street experience’ with cops and the military and went from them wanting me dead to them wanting me to thrive, from hate to love over the years.  This is due to my being a very big ‘law and order’ person because…I had to live with terrible crime levels and the only way to survive was to take over from the creeps who were all criminals and needed to be put in prison.  And then…I took people OUT of prison, too, for people can learn how to be sane, too.  I wish liberals could figure this out.  It isn’t impossible.  PS: almost all the prisoners I took out were black males.  All but one did excellently once I got their records cleaned up.