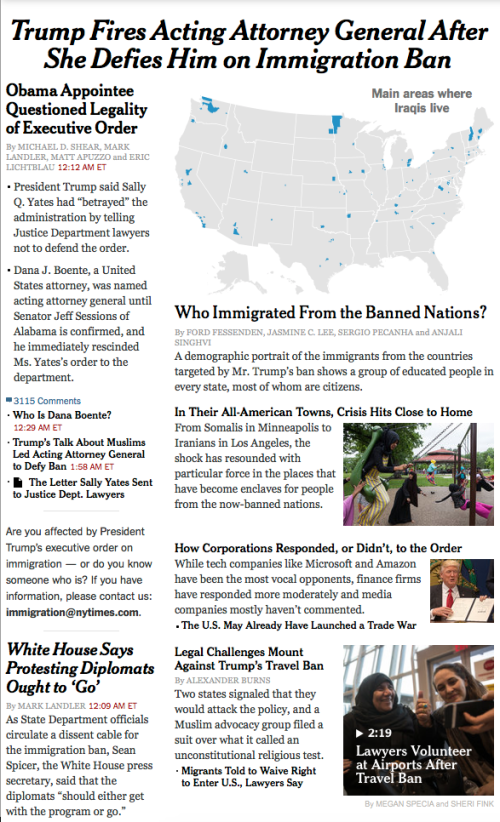 The Israeli/Mexican New York Times wants more illegal aliens to come to the US and lax border guarding.

Trump SACKS Attorney General Sally Yates after she told Justice Department NOT to defend his immigrant travel ban AND then fires director of immigration and customs agency just two hours later, both were Obama appointees as Congress drags heels in confirmation hearings.  The leftwing (sic) media giants continue in the US to attack Trump at every turn, telling readers that he has no right to sack Democrats who are still in office…normally, Congress passes Presidential choices quickly.

This often happened under Obama: he did nearly everything via fiat and didn’t bother passing a thing through Congress because the Democrats lost power there.  Now, the only tool they have now after losing fiat power is to simply obstruct while the media which attacked anyone running against the Bilderberg gangster who was, this time, Hillary, are attacking any and every move made by a non-Bilderberg president.

Senator Ted Cruz, once Trump’s presidential candidate rival, has defended his decision to fire the ‘lawless’ Yates saying the president was ‘exactly right.’

‘After eight long years of a lawless Obama Department of Justice, it is fitting – and sad – that the very last act of the Obama DOJ is for the Acting AG to defy the newly elected President, refuse to enforce the law, and force the President to fire her,’ he wrote on Facebook.

Obama and the DNC had 8 years to fill all the top jobs in the government.  Now, they must yield to the election winners. The Democrats built up their power via a scheme to flood the US with illegal aliens and then have them vote in ‘sanctuary cities’ plus the extra population wold be counted as ‘citizens’ when handing out electoral college votes so California and NY both have increased electoral votes due to an army of many millions of illegal aliens.

This strips voting power from the other states that don’t have as many illegal aliens.  I still remember Reagan: he legalized illegal aliens and then announced, the US would strengthen borders and deport more illegals and…all the Presidents refused to do either over the years because capitalists wanted cheap, illicit labor to drive down wages.  Period.

Undoing this is going to be very painful but it has to be done.  Simultaneously, the Democrats push birth control and abortions which, thinking cruelly, limits the population of say, middle class Americans who are not illegal aliens or on welfare, because children are expensive.  For illegal aliens collecting welfare and citizens doing the same, having as many children as possible equals more money from the government.

This system of making children expensive for middle class families and money making machines for welfare/illegal alien families has produced, coupled with free trade removing union jobs to foreign countries, a social/economic catastrophe as the Democrats abandon US citizen workers and the GOP encourages slave labor wages and de-unionizaion which is why we have virtually no unions left.

He added that Yates joined the ‘ignominious succession’ of Attorneys General, from Eric Holder to Loretta Lynch, ‘who put brazen partisan interests above fidelity to law.  Yates’ lawless partisanship highlights why the Senate needs to act now – and Senate Democrats should end their extreme political obstruction and delay – and confirm Jeff Sessions immediately.’

Democrats have been fighting tooth and nail to keep Sessions out of the Cabinet, with many threatening to delay following his ban on immigrants and refugees from certain countries.

This is a huge issue: who do we let into the country?  The US was created by an European invasion as Europe’s medical care improved during the 19th century and there was this gigantic baby boom and people who settled with great difficulty in the New World’s northern continent during the Little Ice Age allowed this flood of immigrants in order to expand across the continent.

Yes, it was an invasion from Europe.  Europe colonized huge parts of the world like Australia, for example.  This was a typical wave of human expansion like all the many previous waves in the history of humanity ever since we humans walked out of Africa.

This history doesn’t mean automatically that we should passively allow waves of humans to overwhelm our systems and destroy our civilization.  True, many Europeans are descendants of waves of hostile immigrants such as the Norse people.  But this doesn’t mean we surrender to invaders, either.

This is what ‘sanity’ is all about: you want to survive.  Invaders also want to survive.  But letting others come in and destroy is negative for survival.  This is why countries that are sane pick and choose who they let in.  Let in the wrong people and you get social chaos and economic destruction.

Here is the map of Detroit, once one of our richest cities.  After 40 years of free trade and DNC control, after the Clintons betrayed Democratic voters, the end result of all this is this massive dead city.  8 years of Obama and Detroit is as dead as ever.  Note how the populations DO NOT MIX.  The Hispanics, for example, live in their own enclaves.

The surrounding suburbs of Detroit are mostly European ‘white’ but there remains one small enclave inside Detroit.  The rest of the city is black populations of various ethnic backgrounds.  40% of Detroit have ‘incomes’ below $30,000.;  This happens to be the amount Detroit pays for welfare families.   Number of Michigan Welfare Recipients Declines 70 Percent after the GOP took over during the last election cycle.

The state’s major welfare assistance program is food stamps, now distributed with a debit card system. In August, the state of Michigan paid for $188.7 million in purchases by 1.5 million people.  By comparison, the 64,492 people on traditional welfare cash assistance received $9.1 million from the state.  The state is now enforcing a 48-month lifetime limit on cash assistance. Wheaton said the time limit was in place previously but not enforced. The state also enforced federal 60-month time limits going back to the federal and state welfare reforms of 1996.

The fiction that the US is a ‘melting pot’ worked only so long as Europeans came over.  We know that ‘China Towns’ existed wherever Chinese moved in, for example.  Many Asians finally integrated over time but the process usually takes several generations.  This is why the US has to be very careful about immigration policies.  For there are more than one culture that refuses even after many years, to integrate.

For example, the Hassidic Jews form very aggressive enclaves, have their own police and harass anyone whose property they want to buy up after chasing them out.  Their enclaves defiantly have different ways of living that are at odds with our systems and their children go to private schools, etc.  They are not the only ones doing this.

In black immigrant communities neighbors are driven out by tremendous violence and open looting so they take over huge hunks of cities.  The Hassidim and other such groups have spent decades living off of welfare payments while walling off their communities from others and aggressively driving out people who are different.  This is a problem with immigration.  Are they driving out citizens actively?  In many places the answer is ‘yes.’

Here is a Harvard Political Review article from that school’s professors and staff talking about ethnic enclaves:

This doesn’t necessarily mean that all contemporary ethnic enclaves are anathemas. As the encroachment of New York’s Chinatown into Little Italy reveals, some ethnic enclaves are indeed growing. The case of Little Italy is indicative of a larger trend, however, in that immigrant communities, even those that are experiencing growth, are de-concentrating, culturally and spatially, making the concept of the urban ethnic enclave increasingly obsolete.

Good grief, true the European enclaves are dying of literally…duh…Europe isn’t flooding the world with excess population due to birth controls and lack of desire to marry and have children which force is actually annihilating the Japanese who increasingly are alienated from each other and literally dying off.

All over NYC are gigantic very closed off ethnic/religious enclaves!  Try entering some of these.  It is openly dangerous in some areas.  Wiping out neighbors is an old game in Brooklyn, I played it once upon a time.  You have to very aggressively fight off people who want to enforce enclave ‘rules’ that are not written, they are definitely enforced via criminal activities.

The ‘melting pot’ business has been a fraud when it comes to raw immigration survival tactics which involves bringing in as many allies as possible while fending off whoever lives in a place and thus, drive them out and take over.  This social/political force is extremely strong and runs along today just like in the past.  Once upon a time, the elites changed this dynamic by having children educated in public schools.

Believe it or not, these schools paid by taxpayers were a new thing 150 years ago!  And were set up to draw in immigrant children and change them!  Seriously! ‘Make them into citizens’ was the reason given for funding these schools.  This is why all of them used to insist on patriotic actions like saluting the flag every morning, etc.  That is all being hit with the wrecking ball today.

Schools especially in DNC cities are now hell holes that spit out barely literate children who graduate into crime, mayhem or welfare and have to be forced to work but the old fashioned jobs that made good money are now in Mexico and China which is why Trump is fighting both now: economic warfare is deadly!  And fighting back to undo criminal actions and yes, it is criminal to strip a country of its industrial base!  This will take time.

And our media giants are fighting this tooth and claw, too, of course, they hate us citizens.

An addition here: the two shooters in Canada were right wingers but still, one of them was Muslim.  Yes, Muslims shoot each other over ideological issues and religious furies.  Religious warfare isn’t just a ‘left/right’ thing but social.