British PM Theresa May makes her first statement on the bomb attack at the Ariana Grande concert: Yes, it was a Muslim terrorist and yes, the police knew about this terrorist beforehand and yes, they did nothing like all the other terrorists in Europe who were nearly uniformly already known to police as dangerous people.  And will anyone do anything to stop this?  Nope.  Furthermore, Trump continues his very successful diplomacy in the Middle East and yes, the media giants in Europe and the US attack him and lie about this, nonstop.

ISIS has since claimed responsibility and threatened further attacks, saying ‘one of the caliphate’s soldiers placed bombs within a gathering of the Crusaders’.

The suicide attacker is said to have been ‘known’ to the authorities and anti-terrorist officers are going through hundreds of hours of CCTV footage trying to ‘pick him up’ during his journey to the arena.

One security source told MailOnline: ‘It is unlikely that if the device was sophisticated that the suicide bomber made it – experience shows that organisations are reluctant to “waste” the expertise of a bombmaker in an attack, preferring to keep him or her for another attack.

‘It is therefore highly likely that this terrorist is part of a cell or had a support network and they are the priority.

‘Are there other devices, other terrorists out there and you can expect to see raids carried out in the next 48 hours linked to this.’

So now they are arresting known friends of this suicide bomber.  All this reminds me of the Japanese suicide fighters.  Some cultures trend towards suicide deaths.  Now on to the  Middle East.  Trump continues to astonish me with his diplomatic abilities and the press continues to annoy me with fake news gushing nonstop as they desperately try to smear him no matter what he says or does.

Fake news from leftists continues:  A clearly horrified Netanyahu’s eyes dart everywhere as Trump leaks Israel on Live TV – YouTube is an example of this from the mainstream fake news.  This event never happened.  That is, there was no ‘eyes darting’ because of ‘horror’.

Netanyahu was pissed at a reporter for yapping about the ‘did you say Israel’ nonsense.  This came out of the ‘leaked’ taped conversation in the White House between the Russian ambassador and Trump.  All witnesses to this event deny Israel was mentioned at all.  There is zero proof it was mentioned.

So a reporter asked Trump about this false story and he confirmed that he didn’t say ‘Israel’ to the Russian ambassador and the mainstream media pretended that this was a mistake that pissed off Netanyahu who is the media giant’s real boss man, not a mere US President.

These crazy Zionists in the US are attacking Trump when Netanyahu is very buddy buddy with Trump and wants him to be friends very badly.  This continues the split between ‘liberal’ (sic) Jews and ‘conservative’ Jews.

As always, watching a real story helps here.  Trump’s speech had Netanyahu watching him in a very friendly way and he nodded in agreement with Trump over and over again more than ten times.  They then embraced.

So where is the negative stuff?  There was none.  Reframing an event in a false light is lying.  It is the worst sort of propaganda.  At the press conference, Netanyahu mentions ‘something new and potentially very promising…’ which refers to the Saudi Arabians.  Evidently, I am guessing correctly that Trump carried a message from the King of Saudi Arabia to Netanyahu.

And this invisible message is how diplomacy is done during any era, any government, throughout history.  This is how it is done.  Period.  Right after all that, Trump went to Palestine and got the royal treatment there and had a secret conversation with them, too.

Before this trip, the PA  PM visited Trump : Palestinian leader welcomed to the White House – YouTube

And because the news is filthy lying bitches, here is the press conference in Palestine, too:

Trump is doing real diplomacy here.  I am betting there will be no ‘leaks’ from this trip because anyone stupid enough to do this to Netanyahu or the Saudi King will be tortured and killed. 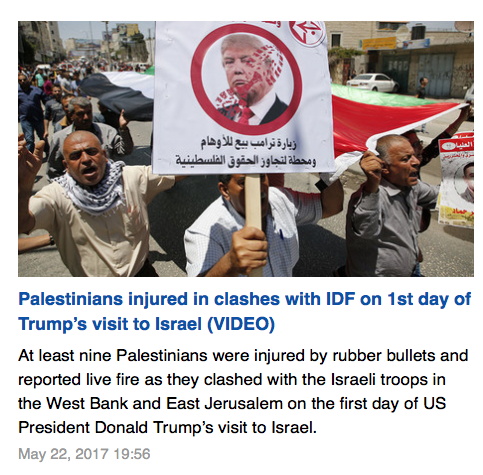 Palestinians injured in clashes with IDF on 1st day of Trump’s visit to Israel (VIDEO) — RT News reports.  Yes, there were anti-Trump demonstrations, too.  Inside Palestine, there are factions which hate each other greatly.  Quite a split there.  All predates Trump by 30 years.

10 responses to “Muslim Terror In Manchester, Trump Diplomacy In Palestine”