Francis is out to destroy Europe, destroy the Catholic Church and destroy the US.  Last January, Pope Francis said: There is ‘no point’ going to church if you don’t really believe in it.  Socialism killed the Church.  Charity comes via the State seizing property and labor and handing it over to illegal aliens and welfare mothers.  Well, this was true in the Middle Ages, too.  The Church tithed people to ‘help the poor’ which translated into building palaces and temples for themselves while looting the very poor which led to the Reformation.  Now, we are back to the Church demanding we be tithed to do what the Church claims it wants to do but doesn’t do at all, the Pope takes in virtually no aliens or refugees at all.

Francis said, ‘I worry about very dangerous alliances among powers that have a distorted vision of the world: America and Russia, China and North Korea, Putin and Assad in the war in Syria’ in an interview with the Italian newspaper La Repubblica.

The countries like all of Europe that seems to be hysterically worried that we are all going to roast to death unless we stop consuming energy and return to the CO2 starvation levels of the previous Ice Ages, are all dying.  That is, fewer and fewer citizens bother with having children.

The connection with the ‘we are going to roast to death’ believers and ‘why bother having any children unless they get welfare money’ people is very strong.  That is, the mass mainstream Bilderberg media giants are feeding entire populations with news that leads them to be suicidal and filled with foreboding and despair.

So they have literally given up and think we are all going to die in the next 20 years.  And we might, if these fools start WWIII.  Note the list of names of countries the Pope is attacking: all have nuclear weapons except Assad and Trump making peace with these is what stops WWIII and the Pope and his gang want WWIII, it appears.

He added that the summit in Hamburg, Germany worried him, and advised Europe not to close its borders off to migrants.

He is a main sponsor of this invasion, he provides ships to pick up illegal aliens and haul them into Italy which is rapidly falling apart due to this as is France, etc.

He also called Europe the ‘richest continent in the whole world’ and urged it not to close off its borders.

Europe is in decline.  The EU is breaking up.  This invasion is destroying it thoroughly.  It won’t exist in 20 years even if it gets colder and colder, Europe is now doomed.  The only thing that can save Europe is for the young people to wake up and realize their dreams of End of Times is false and their refusal to honor marriage and protect children is fatal and the schools who taught them all those insane global warming lessons were lying to them and time is running out for them to save themselves from the fate of Japan: the annihilation of the people via inability to have and shelter their own children.

Yes, some are waking up, mostly countries like Italy that are going bankrupt.  France, on the other hand, wants bankruptcy, I am assuming.

Now, away from British news and back home to my state of New York: This story at the Times has a prominent position on the front page of the online edition of the NYT.  But the above gif appears when clicking on this story on their main page that has a very different headline: 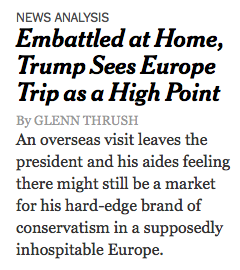 But when I go to the real front page, it is nowhere to be seen at all:

The front page features more attacks on Trump for doing basic, simple diplomacy and it demands that he be confrontational with nuclear powers so we can have WWIII.  One of the top NYT stories on the front page is one about how illegal aliens from India were in a bar brawl and were killed.

The story is about how evil citizens are and how wonderful illegal aliens are.  This is pure propaganda, of course, because the fake reporters don’t examine how many crimes are done by both legal and illegal aliens especially how many terrorist attacks came from these groups including the infamous 9/11 mass murder.

Concealing information is the most important part of all propaganda regimes.  If no one knows the news, no one can talk about the news and make up their own minds.  Tons of real news are hidden from view deliberately.  People who consume mainstream news imagines that all important stories are covered.

This is totally false.  The mainstream news even can claim, falsely, that they miss news accidentally and that is a total lie.  They deliberately refuse to cover many important news stories.  It is constant.  This quiet censorship is their main tool of controlling humans and preventing them from seeing reality.

Lucian Wintrich critiqued for anti-CNN meme | Daily Mail Online: the meme of Trump destroying CNN continues and as day one, it continues to infuriate leftists and the media fake news crews who think it is mean to make fun of them this way:

A journalist has been widely condemned for tweeting a controversial image of ‘CNN’ Twin Towers being destroyed by a Trump plane.

Lucian Wintrich, 29, posted a meme showing President Trump’s head superimposed at the tip of one of the hijacked airplanes flying into the Twin Towers, labelled with a CNN logo.

He immediately deleted the tweet after critics pounced on him.

‘[It was] sent to me by my friend in the Marines – and I stand by it being funny. It was taken down due to requests.

‘I didn’t create it – which was my point. And I could care less if folks didn’t like it.’

Yes, it was in very bad taste but then many of the anti-Trump tropes put out by celebrities and media giants and the DNC were equally or worse in bad taste and violence and they thought they were being funny and were enraged when people got mad at them.

Everyone is acting out right now because the anger about losing the election continues to eat away at the very core of the DNC and its machinery run by the Bilderberg gang and Trump’s recent triumphs in Europe have made them even more unhinged and I have said repeatedly, the more Trump triumphs, the greater the fury and the more they desire to kill him and his entire family as well as the GOP leadership in Congress and perhaps half of the Supreme Court.

Far from being out of danger, danger grows greater. More news from England, not the US:

this blonde bimbo claimed the black dude was too sexy to her.  He was immediately punished while she gloated.  Then it turns out, she initiated the sex.  Ooops.  Warning to all men: keep records of all calls and correspondence with sex partners, they might do something nasty later even if you break up nicely.  Beware!  These females have gone mad with power and think they can cry wolf forever.

And this enrages me, I have been really really raped!

23 responses to “Pope Francis Demands Both WWIII And Muslim Invasion”