Boston fears Islamophobia, blankets city bus stops with ‘building the safe space’ guides –is all about how citizens are to be nice to Muslims because…the real enemy is angry white males!  The white females are supposed to befriend people who want to take away the white woman’s basic civil rights and she is to protect these aliens so they can multiply and take over all systems and then wipe her civil rights out totally and forever.  Isn’t that charming?  This propaganda is totally from ‘liberals’ who supposedly are fighting for women’s rights.  I was the very first teenage female to sue for my civil rights way back in 1965.  I am freaking out over this nonstop propaganda about people who hate my existence.

Boston, where this new propaganda campaign is being launched, has been attacked by Muslim radicals who hate women’s rights. It is as if nothing in the past has happened, the mayor of the city is demanding citizens embrace terrorists and their enablers and culture.

Boston bus stops will be blanketed for the next two weeks with signs aimed at ridding the city of “Islamophobia.”

Why not be reasonable and plaster the city with posters demanding the Jews give Palestine back to the people there who were displaced by Europeans after WWI and then WWII?  The Palestinians don’t want to live in Boston, they want to live at home.  Yet Boston’s mayor and most ‘liberals’ in DC want to steal Muslim homes where they live and…bring them all here?

The Islamic Society of Boston Cultural Center cheered an initiative launched on Monday by Democrat Mayor Martin J. Walsh’s office. Citizens taking public transit are likely to encounter 50 signs to educate them on how to stop Muslims from being harassed.

The number of times female Muslim women who pretend they have no civil right have been assailed is so close to zero is it roughly zero.  When Muslim females are attacked, it is by black muggers, etc. in the cities.  There are no posters requesting black muggers not attack Muslims.   There should be posters requesting they don’t do this!

“These posters are one tool we have to send the message that all are welcome in Boston,” Mr. Walsh said in a statement, the Boston Globe reported Monday. “Education is key to fighting intolerance, and these posters share a simple strategy for engaging with those around you.”

The signage was created by French artist Marie-Shirine Yene, aka Maeril, whose work gained notoriety after the Nov. 13, 2015, Paris terror attacks perpetrated by the Islamic State group.

So who did 9/11?  Hmmm…there are many who believe all sorts of stories about that event and all the stories strive to do one thing: erase Saudi responsibility for 9/11.  The Saudis brought in the terrorists and then refused to answer any questions about the terrorists and Bush Jr. is a traitor for assisting them in fleeing after 9/11 and the CIA is totally complicit in all this from top to bottom and this is all attached to a serious war crime whereby Bush Jr. and the elites pinned all the blame on totally innocent bystanders in Iraq.

The poster for ‘save Muslims from irritations while they attack us periodically with deadly force’ is hilarious.  A pagan woman dressed like a man ‘saves’ the poor lady by sitting by her and chatting about what?  ‘Where did you get that darling sack?  I would love to buy one, myself!’?  A real conversation startup! 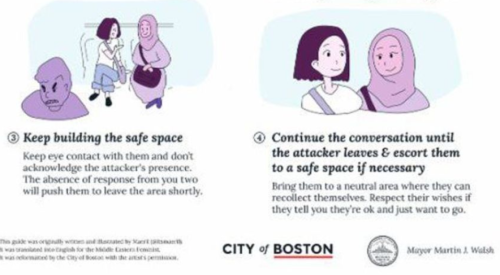 Note the very angry white man retreating while the women become great buddies.  The butch looking American girl is now accepted by the woman who hates women like her.  The woman in the poster is thinking, ‘Allah protect us from such wanton, dirty women!’  Not, ‘I have found a new friend!  Perhaps I should introduce her to my husband!’  Ahem.  NOT.

I love the final words from the mayor of Boston: ‘Respect their wishes if they tell you they’re OK and just want to go.’  HAHAHA.  Or do what they really want: they want pesky infidels to go to hell.  I have had many dealings with the black Muslims in Newark, NJ.  I pulled them out of the dark world of blatant racism (yes, blacks can be racist just like anyone else) and into civil society.  It was a tricky and dangerous business.

The Muslims are quite violent.

The Muslims in this video openly talk about ‘jihad’ while they begin tracking and then attacking this citizen of Australia.

The Somali officer still hasn’t been charged with murder.  This is ridiculous.  The bending over backwards if a criminal is Muslim is insane, dangerous and stupid all at once.  It is making our biggest cities even more uninhabitable and they are already well on the way of being impossible for citizens to live in.  NY AG: Jew Who “Leads Trump Resistance” Wants Third Worlders in America, but Not in Israel:

New York Attorney General Eric T. Schneiderman—named by the Jewish Telegraphic Agency as the “Jew who leads the Trump resistance”—has announced that he will “defend” his state’s illegal invaders against the Administration—even though he openly supports Israel which actively arrests and expels all illegal invaders in the Jewish state.

According to a statement on the New York Attorney General’s website, Schneiderman has urged President Donald Trump to “maintain and defend the Deferred Action for Childhood Arrivals (DACA) program”—the system set in place by Obama to grant amnesty to the nonwhite invaders.

Less than two months earlier, however, Schneiderman proudly tweeted a message expressing his support for the Jews-only state, which has an immigration policy which bars non-Jews from settling in that country, uses DNA to check for the Jewishness of potential immigrants, and which outlaws marriages between Jews and non-Jews.

I was married into a very, very liberal Jewish publishing family in NYC.  I was abused, refused any courtesy, they were openly rude to me at family gatherings, telling me in my face that I was a non-Jew and thus, had no right to eat with them or sit next to them, literally!

After two years of nonstop abuse, I told them I was going away forever.  They CHEERED.  They were very, very happy I wasn’t coming back and I didn’t come back.  They didn’t give a rip that I didn’t come back it was a victory for them.  Naturally, my children were disowned by the family and their money was stolen by a non-Jew who married into the family which was hilarious to me.

This race hatred is at the core of our political system.  Our foreign affairs are totally warped by this.  We have a bunch of very racist Jews yelling at us, we must bring in an army of Muslims here!  Why?  It sounds insane!  And it is insane.  They hope this will start a religious war of Muslim against Christians and then they will side with the Christians and annihilate all the Palestinians in one fell swoop.

Right now, the Palestinians are multiplying rapidly and menace the Jews-only plans in Israel.  This is why we are at war in Syria and why Trump isn’t allowed to stop this insane war and why it is leading to WWIII with Russia.  Perhaps the Jews think WWIII won’t touch them but also eliminate all those dirty Christians, too.

I wouldn’t put it past them thinking this in dark corners of the mind.  I thought my cute babies would warm the hearts of my Jewish relations.  It did the opposite. They were very unhappy that I had a half Jewish son and their daughter only had girls.  It pissed them off no end!  This was utterly ridiculous and shows how deeply these beliefs run and how they make people go crazy.

The Boston posters pretending Muslim women want butch US female citizens as buddies is crazy.  Pretending this is possible is insane.  They hate the butch females!  They want butch females executed!!!  They plan to use violence to force butch females into the closet and lock them up there.

I seriously wonder about the sanity of liberals at this point.  They hate Russia where women are free!  They want WWIII with Russia!!!  This is suicidal.  Russia can utterly destroy the US but the Muslims plan to do this for certain whereas Russia wants to be our friends but can’t because…Russia doesn’t support Israel’s plans for WWIII killing most Muslims in the Middle East.