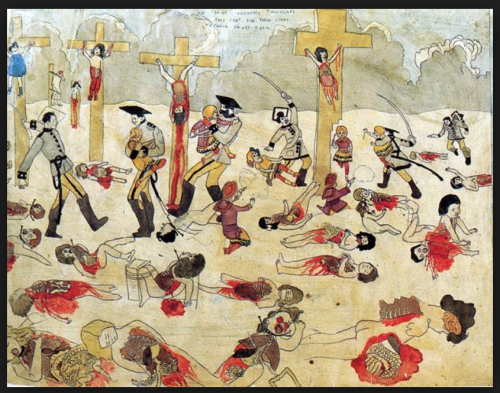 Seriously, this is the ‘artwork’ being taught to students at SAIC college in Chicago!  It is a VERY popular course!  Bus loads of creeps take this class about this creepy ‘artist’ who makes horrible pictures of naked little girls being tortured and raped.  This is like the ‘blood artists’ associated with the head of the DNC and Hillary. They are evil monsters who want to kill most humans in WWIII.  Meanwhile, students are revolting against this revolting ‘teacher’ because he shows revolting ‘artwork.’  I say, let me teach him about skinning animals and cutting off heads here on my mountain.  More fun for me.

Prof: ‘Cadre of militant LBGT students’ drove me to resign complains a professor who teaches dismemberment and rape of little girls.

A Chicago art professor has resigned, saying a “small cadre of militant LBGT students with an authoritarian agenda” created a “toxic environment” for him.

Good gods, this man is the final result of toxicity.  He is beyond toxic, he is pure evil and should roast in hell.  Hell, the Catholic Church delighted in depicting hell but NEVER showed helpless little girls being tortured! 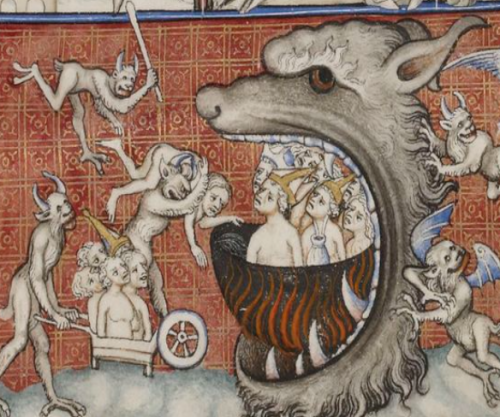 I am proud to be an Art and History Nerd has this illustration from 1300 showing bishops, popes and kings being tortured in hell, not little helpless girls.

Yes, there is an actual ‘school’ that teaches ‘art’ about child torture and rape by lunatics who are so evil, I want to rip them to shreds.  And goofy, mentally ill children sign up enthusiastically for these courses in comix art work because they are fools who don’t realize, this is all designed to put them deep into debt and make the administrators of this scam much richer.  Meanwhile, the students become degraded and evil and think it is OK to produce little girl rape/torture art and then sell it to people.

Michael Bonesteel—a renowned expert on comic books and outsider art who taught popular classes at the School of the Art Institute of Chicago (SAIC) for the past 14 years—explained in an exclusive interview with The Chicago Reader that he resigned after students repeatedly filed complaints accusing him of racism and homophobia because he failed to provide “trigger warnings” before introducing controversial subject matter.

Several things here: why did anyone sane take these stupid, obscene ‘classes’ in the first place?  Secondly, why does this ‘teacher’ and others think these horrible depictions of little girls being raped and murdered, is ‘art’?  Thirdly and very importantly, I was raped at age 5 by a Skull and Bones creep and I am still very pissed off about it all and want to go find him and teach him a lesson only he is dead and the Watchers entertain themselves with him now, not I.

Citing a “toxic environment” that “feels more like a police state,” Bonesteel alleged that student complaints to administrators resulted in him being told he wasn’t allowed to teach future classes on comic books, causing his teaching-load to be reduced to a level that would have rendered him ineligible for health insurance benefits.

Who on earth is supervising this ‘school’?  And this is clearly why ‘art’ has been annihilated by nihilists who hate humans.  The Medieval art was to illustrate Hell and right next to these depictions were pictures of an orderly, safe Heaven.  And the people being tortured were people at the top of the ladder of power, not the bottom!

Bonesteel, an internationally recognized expert on Chicago artist Henry Darger, left SAIC as a result of complaints by three students over two incidents that occurred within a three-day period in his classes last December. Both incidents consisted of objections to ideas and material related to the edgy historical subject matter Bonesteel has been teaching in popular classes at SAIC for 14 years.

Rude? Raw? Often violent? Steeped in the mass culture prejudices of its time? Well, yes—those are the calling cards of Bonesteel’s area of scholarly study: comic books and outsider art.

I used to make comics back in the 1960s and then here on my own news service.  Due to pressing and very annoying family  matters being stuck with caring for 4 sickly elderly, I stopped temporarily doing cartoons but soon I will be 2 people less and perhaps will finally have the luxury of time and ease to do artwork without interruptions.

Nonetheless, I have painted nudes a number of times but these were aimed at higher spiritual states and this relic called ‘beauty’, for example.  Sexual joy, not rape and horror…who would want ‘spirit paintings’ depicting cannibalism?  YUCK.  These people are all yucky.  The teacher in this ‘school’ is a monster, if I were studying art there, I would beat him up to show him what real pain is but that is illegal so I would have to content myself with verbally torturing him for being a monster, a child rapist wanna-be, a co-criminal of all child rapists, etc.

I still will have to restrain myself from beating him silly.  Grrrr…this causes a rise of very deep, fundamentally powerful feelings inside of me.  This is why I think these ‘schools’ should cease operation: they are fronts for the most degrading social sicknesses, almost as bad as the Catholic Church or Saudi Royals and other dangerous psychopaths.

Bonesteel recounted presenting a theory—which he claims is considered plausible by many scholars—that the shocking images might be related to possible childhood sexual abuse.

According to Bonesteel, a transgender student objected to the discussion, arguing that “there was no proof that Darger was sexually abused, and therefore I was wrong in proposing the theory.”

If this creepy fake professor really wants to know what that ‘art’ is about, it is about an adult MAN fantasizing murdering and raping little GIRLS.  It isn’t because he was raped and if he was raped, he should be honest about this and depict his own rape, not anonymous little girls.  So he is now part of the rapist community, not the victim community.

The real question is, why are they teaching stuff I used to produce when I was 17 years old and a student, myself?  Why can’t these students and their fake teachers produce their own stuff?  Why ‘teach’ this trash when one can produce one’s own trash?  I used to work with Zap Comix way back when I lived in the Bay Area and knew the artists back then and they were all psychedelia fiends high on drugs and this was reflected in the comix made back then.

This newer stuff is just pure evil.  It looks like Nazi ‘art’ as seen by a communist KGB officer wondering if he should imitate the Gestapo.

I mean, it is evil, as evil as the Spanish Inquisition levels of evil when believers in this ‘god’ used this as an excuse to be total demons and devils and pure evil.  Grrr…again.