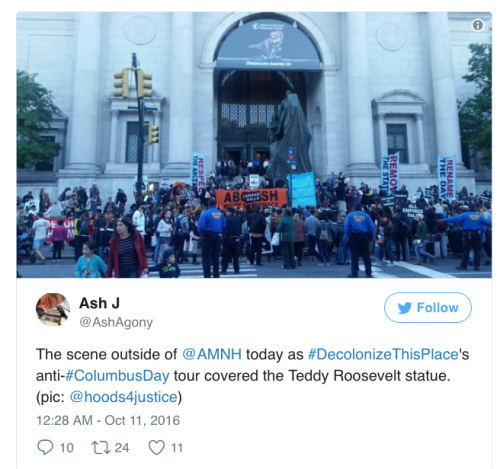 These vandals were demanding the NY Museum of Natural History take down statue of Teddy Roosevelt and the museum staff let them block the front doors and then INVITED them inside!  Where they continued to trash talk the place and parade about with huge banners, shouting various jeers aimed at the founders of the museum.  This is in stark contrast to how the politicians and police treat anyone who is pro-Trump, for example.  The looming demonstrations against Google are now being forbidden by politicians and our Real Rulers who don’t let anyone protest anything that the Rulers want to keep status quo tight.

Hundreds of activists gathered at the American Museum of Natural History on Monday to take down the “racist” statue of Theodore Roosevelt and an urgent call to rename Columbus Day.

This is a direct strike at my own family and myself.  We came over here way back in the mid-1600s. Here for everyone’s ears is the Disney song, Its a Small World:

More than 200 people cheered outside the museum as activists covered the statue of Roosevelt on horseback flanked by an African American and Native American on either side and demanded it be ultimately removed.

See? They won’t rest until they totally destroy all traces of our past.  They deliberately attacked Teddy because he was much, much more pro-Indian than any President before him or frankly, after him.  My family was always treated very kindly by the Natives in Arizona and I have worked with them in the past, too.  And we were one of the very first US citizens to come to Arizona way back just before the Civil War.

“A stark embodiment of the white supremacy that Roosevelt himself espoused and promoted,” the group explained in a statement. “The statue is seen as an affront to all who pass it on entering the museum, but especially to African and Native Americans.”

Everything is an affront to these gangs.  They also want to destroy all cathedrals and all traces of higher civilization.  They are blood brothers…er…SISTAS to the Taliban in Afghanistan, erasing all traces of Buddhism.  Yet many of these young people love Buddhism!  And want to import as many Taliban as possible into Europe and the US…crossed wires going on here, big time.

Activists from the groups NYC Stands with Standing Rock and Decolonize This Place organized the protest to draw attention to the museum’s encouragement of racist tropes, and implored New York City to rename Columbus Day to Indigenous People’s Day.

The Cultural VANDALISM of the USA – YouTube:   Now see how this gang making demands and blocking the front door did next:

The group started with a 10-stop tour of the museum in which they highlighted a variety of exhibits they felt were racist and misrepresentative, which ranged from how the representation of Africans reinforces negative stereotypes to the exoticizing of Islam in the Hall of Islam exhibit. “Where is the Hall of Christendom?” one of the tour guides asked.

So, they disrupted everything with this temper tantrum.  There should be a Hall of Christendom there!  And it should extol the great achievements, the high culture, the functional society of that world.

“It’s just to echo what this is, it’s really a hall of white supremacy, that’s what this is,” said Nitasha Dhillon, one of the organizers. 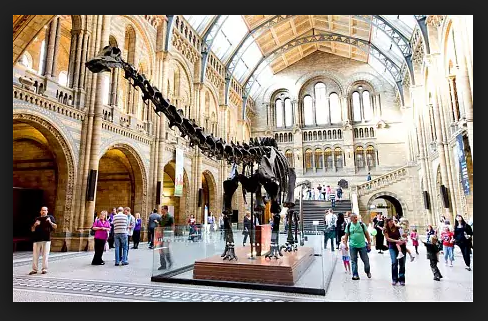 And…this year the museum removed the happy brontosaurus from the front hall…my own children loved that dinosaur, I used to take them there a lot so they could do indoor stuff in winter.  All the children want to see the brontosaurus!  Now, they have hanging from the ceiling, a whale skeleton which is big but it isn’t extinct.

Funny thing happened when I was googling this story: the statue demands were not the first items, it was all about the dinosaur being removed.  I didn’t notice that in the news this year so it took me by surprise.

And yes, the peace (sic) activists who are mostly violent leftists seeking total power, protested Airbus sponsoring a Science Museum!  And again, they were allowed to do this whereas anyone contesting the leftists for power are physically attacked while the cops stand aside, in England as well as the US and in Germany, too, anywhere there are Bilderberg rulers, we get this result.  They really hate and fear nationalism.