The London Daily Mail is most amusing, they print the mainstream propaganda and all the other news.  Trump is under sustained attack because he said ANTIFA illegal marchers were also responsible for the riot in Charlotte.  This raised howls of rage from the fake liberals and now Trump’s team is finally fleeing the battlefield because who can withstand withering fire from a bunch of ANTIFA-friendly SJW media multibillionaires?  Eh?  Poor babies.  We are not supposed to fight back, ever, according to them all.  They have no idea what a storm is on the horizon, thinking that inner city rioters will protect rich people…eh?  Looting?  Eh?  HAHAHA.

When I was a child, I learned the harsh lesson, the ultimate curse is, ‘May your wishes come true.’  The mass media Bilderberg gang wants Trump out and they may win this and then impose a new regime that is open borders/lock white males out of STEM jobs too/double debts on everyone and…this will cause the final collapse of the good old USA.

Already, across the country, DNC people are taking down statues that piss off the far left.  This is a Maoist revolt going on now and has a very nasty end…for all the Madame Maos doing this.  Meanwhile, ignored here in the US is real news: 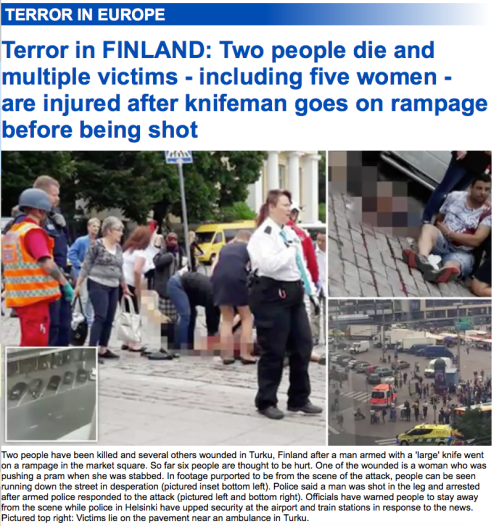 Allah Akbar!  And more are dying all over the place, Europe wanted to bring in millions of angry unemployable Muslim males and got jihad. Duh.

Americans are being slaughtered by mad Muslim terrorists and the DNC is insisting on bringing them over here, too, so we can have more fun.  Every attempt at stopping this is hammered down by DNC judges, DNC media giants and now, Fox news has joined in and told its 50 million viewers to go to hell, too.  And this is blowing up, online, big time.

Fox viewers are very pissed off today.  They will be gone, tomorrow.  The coup hopes to strangle the online news because they don’t want many millions of angry Americans going elsewhere for news.  They want them all penned in the various animal butcher pens built by our rulers who are systematically destroying our school systems, for example.

Hooray for smart women who don’t hesitate to kill terrorists!  I salute her, loudly.  Spain, like Hungary and other former victims of Muslim invasions, remembers the Middle Ages and the people there are getting quickly fed up with being hosts of another Muslim invasion by violent terrorists.

They know very well what will happen next!  Why did Columbus sail the ocean blue from Spain? Oh, the Muslims took Constantinople and cut off all trade with China!  I can’t believe my eyes!  It hurts.  The Jews don’t want Muslims running anything, if any Muslim takes over, they will turn on the Jews instantly!

I can’t fathom the psychology: people are just insane.  On to the Mexican-owned/Jewish New York Times:  They have only one terrorist story from Europe and note they don’t know who did it or why!  HAHAHA.  And they have the cheek to talk about ‘the horror…thin line…divides civility from barbarism’.  ANTIFA is very barbaric.  And supported by the Mexican/Jewish cabal that runs the NYT propaganda systems.

Both these stories mirror each other. Romney supports ANTIFA terrorists who are attacking GOP voters!  Oh, I hope he talks a lot about that when running for office again.  He falsely claims that the white men are 100% responsible for the riots and ANTIFA is innocent. This is insane.  And propaganda.  And Romney is a huge Bilderberg gangster guy, on top of this.

ANTIFA is the street thug arm of the Bilderberg gang.

These radicals are ‘ready to fight nationalists’ and the NYT is a free trade/sell our workers to China internationalist rag that hates US citizens who pay taxes and work in real jobs which is why the NYT celebrates moving jobs out of the USA and were freaking out when Trump began forcing corporations to move jobs back home again.

THIS IS THE KEY.  They don’t hate Trump, they hate American workers.  With a huge passion.  They particularly hate white old style union male workers who fought for 100 plus years to gain wages and benefits.  Virtually all the unions left are government ones like the Teacher’s Union which gives money only to Democrats who then use this to destroy male workers.

The RNC is very stupid thinking that the people under assault don’t notice they are fighting on the ANTIFA side, not the US male side.  This will have a huge repercussion in the next ten years!  I can see what will happen next: the death of the GOP which controls Congress, the White House and the Supreme Court only it is a very divided party with the Globalists on one side, in a secret alliance with the DNC and on the other?

The media giants are very aware of him and are attacking him as much as they dare.  President Rand Paul: He’s Becoming a Better Politician Every Day | New Republic posted in June:

It was the first time in recent memory that the Iowa GOP Lincoln Day Dinner sold out nearly two weeks in advance, and it was on the strength of its headliner, Kentucky Senator Rand Paul, who, in turn, was invited on the strength of his 13-hour filibuster against the Obama administration’s use of drones. During the happy hour at a small Cedar Rapids hotel, local donors stood in line to have their pictures taken with Paul, almost completely ignoring their own congressmen, Representative Steve King and Senator Chuck Grassley. They had come to see Paul, and he got a standing ovation before he even started talking.

Paul began in stand-up mode, describing a recent trip to New York in which he had driven by the Federal Reserve—the crowd booed on cue—to find it blocked by police cars. “We go up to the police, and we ask what’s going on, and they say the Federal Reserve has been robbed. And we said, really?!” Paul said, his voice nearly cracking in mock disbelief. “They said, ‘Yeah, but we caught the thieves. They got in front of the safe, they had the big safe open, but they were perplexed. They were flummoxed. They didn’t know what to do with minus sixteen trillion dollars!’ ”

Oh my, he even talks about the Federal Reserve and other Verboten Issues that no one dares to mention in public.  The New Republic which is really The Old Guard, is attacking Trump nonstop now demanding he disappear after winning an election because…all the Big Bosses want him gone, damn it.

His advisers talk of McConnell as Paul’s “political father,” right up there with Ron. “He has taught Rand how power politics work,” one of these advisers said. “It’s what his father couldn’t be a mentor in.” But Paul has taken McConnell’s methods to the next level. McConnell, says a staffer with the Senate Democratic leadership, routinely slows down Senate business, but “has always done it subtly.” Paul, on the other hand, uses delays as a public-relations tool: His drone filibuster effectively turned Senate rules into a 13-hour presidential campaign ad.

I have posted videos of Rand doing this.  He has to use a hammer because Congress is now so corrupt and screwed over thanks to foreign and corporate money funding all elections now…and most are NOT Russians…this corrupt Congress has one shining light who stops ‘business as usual’ which irritates the Bilderberg gangsters there, no end.

“Procedurally, the way he operates is hostage-taking,” says a Republican Senate staffer. “What Paul has done is basically say, ‘If I don’t get my way, nobody is going to get anything. I’m going to hold up everything until I get my way.’”

This is why he will win in the end, even if they kill or remove Trump illegally.

Often, this means forcing a vote on one of his amendments, like a proposal to end foreign aid “to countries that burn our flag,” such as Egypt, Libya, and Pakistan. When this happens, “all his colleagues leave the floor cursing his name,” says the Republican staffer. “This isn’t the way you do business here.” Other senators, including Maine’s Susan Collins, were furious at Paul after PACs associated with him attacked their positions on gun control. These ads, says the Democratic staffer, are “a cardinal sin.”

Yes, the GOP staff want to keep the overseas status quo of free trade and buddies with terrorists going and going onwards, forever.  While they run against it during elections, no less, they are pissed that Paul Rand actually does something they talk about but never do!

Rand Paul says Baltimore riots are about ‘lack of fathers’–boy, that statement brought out lots of rage in our ANTIFA media SJW clown show.

Disgusted by what he termed “thuggery and thievery” in the streets of Baltimore, Paul told Ingraham that talking about “root causes” was not appropriate in the middle of a riot.

“The police have to do what they have to do, and I am very sympathetic to the plight of the police in this,” he said.  Paul has his own theories as to what the root cause of the riots are.

“There are so many things we can talk about,” the senator said, “the breakdown of the family structure, the lack of fathers, the lack of a moral code in our society.”

The situation in black communities are now in a full blown crisis.  Anyone daring to talk about the near-total collapse in marriage there is hounded by the media giants and the Bilderberg gang.  They hate people talking about this.  All of them get married all the time!  But peons are supposed to gad about, pop out kids and have the State take care of the little brats, not parents and certainly, ZERO fathers.

What do you think of Rand’s rant?

Note the Atlanta Daily World has to use the word ‘rant’ instead of ‘ideas’.  Obama’s ideas was to have the State raise all these kiddies and outsource this to unmarried mothers who would then train their kids to be failures.  This keeps down competition for top positions up above.

The parents of Chelsea Clinton gave her a golden ladder to the top. The Trump kids can do well, too, unless the mobs stirred up by the Bilderberg gang murder them.  All the rich kids do well.  And their competition will be only SJW women of lower class and some desexed males who will bow down to the elite minorities who will walk all over them, all in the name of ‘equality’ that is…you can be a professor and be very stupid and ill-informed but don’t worry, your pay will be less than waitresses at the local coffee shop!  Take that!