Big news!  Or rather, murky big CIA news: Trump has pulled yet another political coup.  Even as the Bilderberg gang, as we see in the Bilderberg buddy photo op above, worked hard to prevent any real information about the Kennedy assassination to be released to the public even though all the main actors in this little drama are DEAD.  No, like Operation Paperclip which still remains 90% redacted and secret (every action my father took during that business is still top secret!!!) we are now supposed to see all the information which I hope will happen.  About time.

Poor Jimmy Carter.  He posed in this picture and as always, he stands to one side from the others because he isn’t part of the gang, he is scared of the gang so he won’t say anything and this angers me greatly.  My father was a friend of his.  To my father’s dying day, he was frightened that I would yap about Operation Paperclip and get him in trouble with the CIA.

The CIA is an evil operation run by strange people who believe in magic powers and who are fine with stealing Geronimo’s skull and using in every April 15th to do magic spells which ticks me and also the Apache tribal leaders, it pisses us off greatly.  The Apaches have their own magic ceremonies to deal with this abuse of their own kind.  I feel sorry, slightly, naw, not sorry at all, for all the stupid Skull and Bones Yale clowns, they all get to sit down and chat with Geronimo at the Gates of Death.  Good luck to them all…HAHAHA. 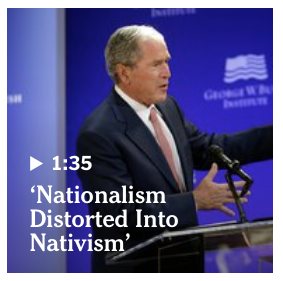 Bush Jr. went out this week to openly attack citizens for being patriots.  GOOD LORD, this is now so utterly naked, and I am intensely pleased that 50% of the nation is now seeing this monster for what a clown he really is.

All our media giants aside from half of Fox TV, are openly attacking patriotism, courtesy, protecting the US public, they are openly at war with the citizens.  There are millions of people who were let into the country without being taught how to be a real American and many of these assailed US citizens during the election cycle, encouraged to wave foreign flags while screaming they want to kill citizens!

The US media thought this was a good thing, too, and blamed Trump for these foreigners rioting in our cities, attacking citizens.  We are told, it is our fault for not being nice to illegal aliens who have more civil rights than citizens.

This is a huge, gigantic rift in our country: liberals hate patriotism.  This is very highly dangerous for the liberals.  Uniting with foreign invaders to attack the concept of ‘citizenship’ is very, very deadly.  I can’t believe people are this stupid to think this is a good thing.

Back to Kennedy: there was no reason on earth, big or small, to keep everything secret.  Zero.  This secrecy had only one element of importance: the CIA brought over the assassin from the USSR and let him loose to assassinate the President.

Oswald was tracked by the CIA from the first hour he left the USSR to return to the US with his Russian bride.  They tracked him in Russia, too.  They certainly had a very, very, VERY short leash on him when he arrived here.

There was no way in hell he could do the assassination without the CIA knowing everything beforehand.  The CIA was very angry with Kennedy due to the Bay of Pigs fiasco.  They wanted him dead like they want Trump dead.

The entire garbage of ‘Oswald wasn’t the assassin’ was cooked up by the CIA to deflect people from understanding that it was insane for Oswald to be unleashed, unwatched, in the US in the middle of the Cold War after he defected to the USSR.  The CIA spied on me when I was a teenager!  I used to tease them about that since I am a CIA brat and know the tricks of the trade which is why we dueled periodically.

The thing is, pretending they did NOT spy on Oswald heavily is insanity.  I knew this the day Kennedy was assassinated because my father was raging about this back then and he was scared, afraid he would be assassinated, too, but LBJ talked to him and assured him, he was safe!!!!  What!!! ???

This is how reality works: it is actually not difficult to understand.  Assassinations are easy, oh so very easy.  Used constantly due to ease of use, and it takes an awful little effort, too, virtually no one, just the tiniest handful of people required to carry out an assassination.

My own father even told me how HE was trained to assassinate someone!  This was required of him before he went over to Nazi Germany to find the rocket caves.  He said, literally, ‘I can kill someone with a pen’.  Yes, a pen.

He was trained to deceive, to look like someone he wasn’t.  People consistently underestimate the ability of the CIA to go underground and undercover.  It is very tricky.  The CIA diffuses itself into everything and one thing the love to do is MISDIRECTION and oodles of people fall for fake stories set up to deflect them from figuring out obvious things, I see this everywhere, all major violent events are clothed in fake stories people anxiously believe because they cannot fathom that just ONE HUMAN can do horrible, history changing events including launching WWI.

The world is erupting in fury due to all the forces at work now, forces pushed upon the world’s populations by our Real Rulers and their stupid schemes, the #1 being ‘destroy patriotism’. 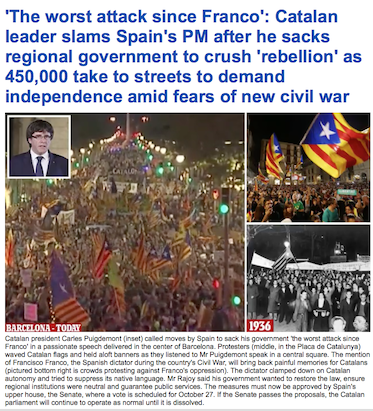 Spain is just one of many EU ‘nations’ that are furious with the EU which is a Bilderberg operation from hell.  They are now in open revolt all over the place. Spain no longer exists as a ‘country’ and keeping the fiction that it is still a nation is primary with the Bilderberg gang but they don’t want real patriotism, they want people to be detached from their own countries and view these as fictions, not facts.

Spain is going bankrupt and naturally, there are bank runs now.  From Russian news which is being censored in the US because we are supposed to be kept stupid: 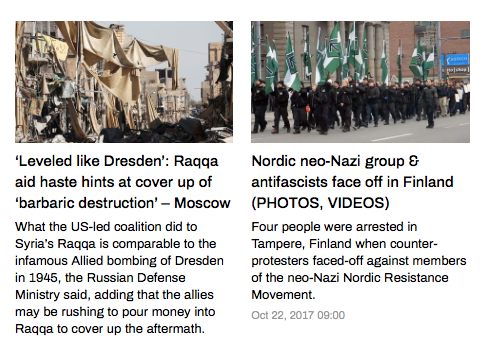 The patriotic right is rising all over Europe.  In the recent election in Austria, the far right won overwhelmingly and the new prime minister is going to stop the Muslim invasion there.  Meanwhile, in China, there has been a coup/countercoup:

An old Chinese curse is ‘May you live in interesting times.’