Columbia University is in the news today and so I decided to do a big story about that insane school that is utterly PC perfect and thus, is costing students an arm and a leg to ‘learn’ SJW garbage while packing away loot overseas which supports a very bloated administration while the professors lose pay.  All this is indicative of an exploiting system that destroys young people while making lots of profit, doing this destruction.

First, some raw facts.  This ‘school’ is very, very expensive.  It also has a high reputation due to how it operated before it became a looting operation.  Columbia University in the City of New York Tuition and Fees, Comparison

On top of sky high fees to learn nothing useful, the school has serious social problems mainly caused by SJW students and professors.

Columbia settles with student FALSELY accused of sexual assault: is the school let a female student run around campus with a light mattress as she illegally claimed she was raped when that didn’t happen. The school didn’t kick the female out when she ran around campus, defaming her former boyfriend.

The school said it stands by its finding, reached after “a diligent and thorough investigation,” that he was found not responsible for any misconduct. Nungesser graduated in 2015 from Columbia in good standing and is currently enrolled in film school in Germany.

“Columbia recognizes that after the conclusion of the investigation, Paul’s remaining time at Columbia became very difficult for him and not what Columbia would want any of its students to experience,” the school said in a statement.

The Democrats used to be all for this sort of ‘free love’ and ‘free speech’ and look at how it has morphed into ‘we hate sex’ and ‘no free speech for anyone but us sex-hating female harridans’.  Here is a fine example of the insanity of our young people going to college and ending up freaked out and utterly unable to cope with sex and real life anymore: Columbia Dems apologize for condemning disruptive protests.

The Columbia University Democrats have retracted a school newspaper op-ed opposing disruptive student protests, saying they didn’t realize how much “labor” is needed to shut down free speech.

So, right on the heels of last month’s apology to the student who was hounded by SJW females who fell for a girl’s obvious lies about her sex life, the school turns around and…falls to student demands they not be exposed to any ideas outside of their SJW beliefs.

On October 29, after hundreds of students shouted down a lecture given by conservative speaker Tommy Robinson, the CU Dems published an op-ed in The Columbia Spectator warning other students of how protests can backfire.

Just a few weeks after the op-ed was published, hundreds of studentsturned out to protest Mike Cernovich, who was invited to speak upon the request of the Columbia University College Republicans as part of their Free Speech Month series.

In the wake of protests against Cernovich and Robinson, on November 21, the CU Dems decided to retract their initial op-ed, apologizing for their criticism of student protesters and atoning for how they may have supported “violence” by discouraging protests.

Look at the blatant ‘doublespeak’ in this story: the DNC kiddies are saying that refusing to riot means…they CAUSED riots!  What?  ‘They may have supported “violence” by DISCOURAGING protests!’

This mindless thinking is what happens after kids spend a couple of years in ‘school’!  They can’t even write a logical statement of intent.  This is beyond stupid, it is utterly insane.  How can ‘discouraging (violent) protests’ create ‘violent protests’?

And how, pray tell, can JOINING violent protests, stop violent protests?  They aren’t just against ‘free speech’, these poor victims of bad teachers think that it is logical to shut down everyone else’s right to have public speeches via Nazi tactics.

At this point, governors should shut down any ‘school’ that is teaching the children illogical, anti-social metrics.  What is more frightful is, Columbia University is in New York City and is supposedly a top school, not a backwater nut house.  How pathetic, basic logic no longer exists at this fake school.

Here is an editorial by these DNC students which shows how insane they are, they are scared of Mike Cernovich videos.  Rep John Conyers steps down, lies about Mike Cernovich on his way out. #UnsealTheDeals – YouTube

CUCR will tell you they are bringing these individuals to campus for the purpose of “discourse.” That is utterly and completely false. In fact, these speakers fundamentally undermine discourse on college campuses. If CUCR sought to represent conservative voices on campus, they would bring real Conservatives who can challenge liberal ideas and provide value to our campus. Instead, they’ve chosen to bring racist provocateurs, drowning any possibility of real discussion underneath their bile.

The consequences of bringing provocateurs to campus go far beyond simple discourse. These individuals directly threaten communities on our campus. Tommy Robinson, who spoke on campus recently, has suggested that we intern select Muslims, and he has been repeatedly arrested for aggressive assaults.

Anyone and everyone who opposes the liberals is ‘a racist provocateur’ to these lunatics.  They cannot see themselves in the mirror, being vampires.  All they know is, they are pure and holy and anyone who doesn’t agree with all their many beliefs and demands are demons to be attacked and killed.

They cannot understand how anything is wrong with them demonizing absolutely everyone who doesn’t adhere to their particular and evolving agendas.

This is exactly why we have an obligation to respond to these individuals. However, when we seek to resist these bigots, it is fundamentally important for us to remember what our goals are: to protect and support communities threatened by these individuals, to prevent such hatred from returning to our campus, and to elevate the voices that actually add value to the world.

See how insane these highly educated children are?  To ‘prevent hatred’ they are being foul, violent, obscene and destructive!  How on earth does this prevent ‘hate’?  It has the opposite effect which they cannot understand.

If we hold ourselves to these standards, the way that students have engaged in the past does not work. Across the country, students have responded to these individuals by protesting, by shouting them down, by drowning them out. From Middlebury to Berkeley, these protests have gained national media attention and enraged people across the political spectrum, but have done little to stop these bigots from coming to campuses or to protect communities of students.

Too stupid to understand why Trump won: people watched students go insane and decided we need someone to stop them.  Note how these brainy students carefully avoid talking about outright violence like BURNING SCHOOLS and LOOTING STORES that these stupid protests against invited speakers has seen.

Pretending utterly illegal actions don’t even exist is a sign of madness or criminal thinking and since this is Columbia, I think these very smart kiddies are criminals openly plotting to destroy society for their own ends.  And thus, that this ‘school’ is not a school at all but an indoctrination system set up to turn children into criminals.  Shut it down!

I went to the student’s newspaper to see what insanity bubbles up there and found plenty: Activist groups distance themselves from CU Dems over Israel, CUCR positions – Columbia Daily Spectator  HAHAHA.  So much for ‘joining the gang to attack people!’ scheme! 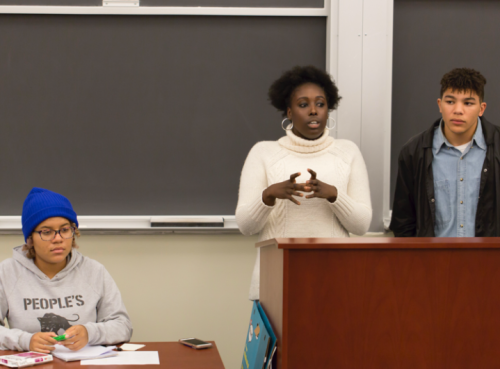 A primary divisive issue is CU Dems’ relationship with pro-Israel groups, which conflicts with groups such as Columbia University Apartheid Divest that frequently align themselves with activist coalitions. Last month, CU Dems co-sponsored an event hosting Congressman Adriano Espaillat, which was part of Israel Week at Columbia hosted Aryeh: Columbia Students Association for Israel. While Dems has no official position on Israel, some activists point to the recent partnership with Aryeh as a reason not to work with the group.

So, the Jewish kids running the DNC operation at Columbia University are…the ENEMY!  HAHAHA.  They thought they could join in the fun of being violent revolutionaries only this is backfiring on them today.

Here is today’s top story at that goofy student newspaper online: ‘I don’t feel like I belong here’: Students of color on the unique challenges they face at Columbia – Columbia Daily Spectator BY RAHIL KAMATH AND KHADIJA HUSSAIN

When Sabina Thomas, SEAS ’20, first moved into her room in Carman Hall in the fall of 2016, she expected a change of scenery from the predominantly white high school she attended in upstate New York.

However, as she made a concerted effort to get in touch with the black community on campus—getting involved in organizations such as the Black Students Organization and the National Society of Black Engineers—she noticed an inherent disconnect between the experiences of students of color and white students that continues to pervade her Columbia experience.

This black female went to a mainly white school.  She probably got a wonderful scholarship due to being ‘black’ and thus, rode in on this magic carpet whereas a white male, the group vanishing more and more from colleges, gets nothing but a kick in the teeth.  Yet, she is whining about ‘being black’ and wondering why everyone isn’t on their knees, bowing to Her Majesty!

Despite the fact that Columbia has the most diverse undergraduate population in the Ivy League, students of color at both Barnard and Columbia experience microaggressions in and out of the classroom and feel a pressure to start conversations about race among students and faculty, such as by pointing out ingrained racism and microaggressions.

HAHAHA.  So, this aggrieved female who got into this school via a magic carpet, is carping about all the others allowed to go there and who are mostly paying huge bills to go there.  She claims she feels ‘pressured’ to talk about race and the various ‘microaggressions’ she seems to be enduring…which makes everyone around here move away and avoid her!  How else does one deal with ‘microaggressions’?

Well, the students who are black have decided, AVOIDING them is a ‘microaggression.’  What?  If you look at them, you are ‘microaggressing’ and when you avoid looking at them, ditto.  This is called a ‘no win’ situation and leads to either violence or mockery or both.  What other solution is there?

No one is telling this young lady that she is suffering from mental illness.  What if we replaced ‘Trump’ with ‘Obama’ and ‘black woman’ with ‘white woman’.  Easy to see no one would publish a story about that, even if it existed.

As part of the University’s effort to expand critical discourse regarding race, the Office of University Life’s Task Force on Race, Ethnicity and Inclusion was formed in 2015 in order to “engage in critical conversations about inclusion, campus climate, and community citizenship.”

HAHAHA: general rule of thumb in an organization is, the more words used to describe the job, the more useless the job.  What sort of thing is this ‘Life’s Task Force on Race, Ethnicity and Inclusion.’  I wrote about that very job situation and complained about how it was rank condemnation of various things like distributing flowers.